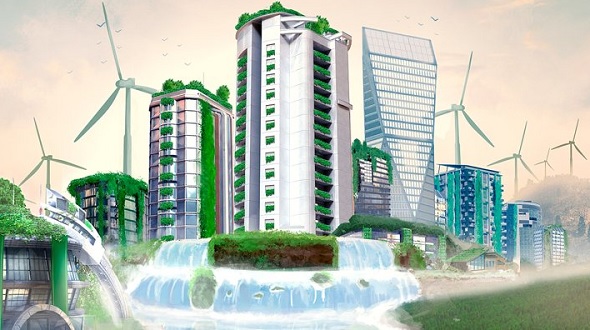 Since going vegan I have been trying to make the videogame characters under my control follow suit. If I am playing a game in which killing or farming animals for food is not a necessity to survive, then I will avoid it. In The Sims, for example, I will give my virtual people a vegetarian trait and make sure they do not eat foods with egg or dairy in. Even in Planet Coaster I only reluctantly put down Chief Beef food shops or Cosmic Cow Milkshake stands because I know that, if I didn’t, my guests would probably die… or just not come to my park. A fate worse than death?

Think Green Cities is political? Wait until you find out that Cities: Skylines was almost a political sim.

You can imagine, then, my inner torment as I polluted the Earth with massive industrial areas, gas-guzzling cars, and waste services that created a gross greeny-brown smog in Cities: Skylines. I would try to make my cities as green as I possibly could – establishing water and energy caps, low vehicle areas, and encouraging recycling – but it was never enough. 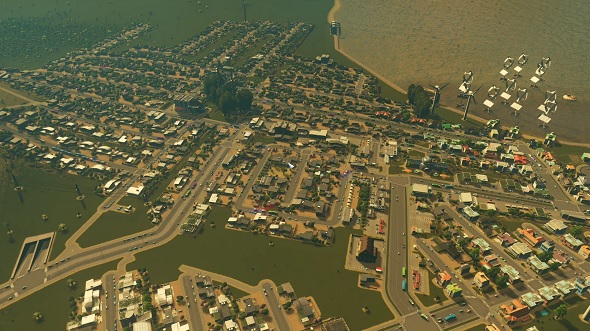 But then I saw that Paradox were bringing out a Green Cities expansion. This DLC is entirely focused on encouraging players to be more mindful of the environmental impacts their actions have, not only on their people, but the world surrounding their city. As you can imagine, I was very excited. Naturally, I had to try it out for myself to see how well Green Cities aligns with my own dreams for the world.

Cities: Skylines – Green Cities boasts 350 new assets including eco-friendly buildings, organic shops, electric cars (and one-seater moped things), biofuel buses, and entire new services such as a waste treatment facility and a floating garbage collector. It gives you the option to play three new maps, each with their own challenges from the start – a lake instead of the rubbish-swilling convenience of a coastal current, for example, or an incredibly hilly area, meaning you have to spend time and money flattening it or attempting to build around it. Along with four new policy options, and a new monument, it also opens up three new scenarios: Clean Up Crew, City of Gardens, and Green Power. 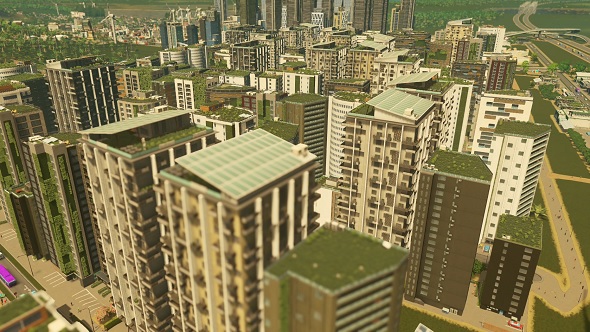 I always opted for building a city powered by wind energy even before this expansion, but having a few other options such as the Geothermal Power Plant, and Solar Updraft Tower to choose from further supports my environmentally-friendly urban mission.

Unsurprisingly, Green Cities also offers more options when it comes to parks and even medical buildings. There is a yoga garden, sports hall and gym, and a community pool – all of which encourage exercise and give residents massive health benefits. That the DLC goes so far as showing how we can all contribute to making the world a greener place through our lifestyle choices is refreshing. New unique buildings include a bird and bee haven, floating gardens, Lungs of the City, climate research station, and a central park, giving your cities greener spaces to break up the concrete jungle you have created. 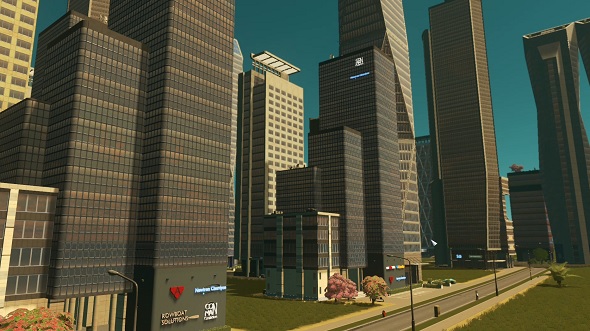 I decided to not only make portions of my city greener, but to make the wholecity green. Did I succeed? Kinda. The only thing that bugged me was citizens ‘chirping’ as they asked for locally-sourced meat – probably the least sustainable thing my people could ask for. The vegan battle continues. But I wasable to encourage zoned areas to become either organic commercial buildings, self-sufficient residential areas, or hi-tech IT offices.

So far, Green Cities has delivered on its title. I was able to make my city feel properly green, and driving other players to do the same is a good way to spread one of today’s most urgent messages – we need to learn to be kinder to our planet. One of my most recent achievements is ‘Earthloving City’ – which means I managed to achieve no water or ground pollution in a city of over 10,000 residents. This makes me, as an environmentalist and plant-eating Earth lover, a very happy gal. Give it a go – it is the kind of effort that will save us from the dystopian, smog-ridden cities that litter sci-fi.