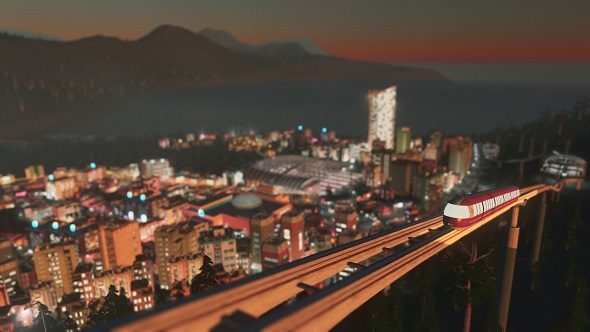 All aboard the monorail, as Cities: Skylines’ Mass Transit expansion has just pulled into the station. Adding various new modes of transport like ferries, cable cars and even blimps to Paradox’s city builder, there are plenty new ways to move your citizens around with this new expansion.

Find out how Cities: Skylines nearly became a political simulator.

Besides the obvious bonus that you can now build your own genuine bona-fide electrified six car monorail, this expansion has also added new road types, three new landmarks and the ability to connect transport options together via the new metro hub building. You can’t unfortunately create a combined blimp and ferry station, but expect modders to be on that within the week. Most importantly though, this update finally adds three new hats for Cities: Skyline’s bird mascot, Chirper.

If you aren’t quite ready to create the transport metropolis of the future, Cities: Skylines has also received a free update to go alongside the Mass Transit expansion. This adds the ability for players to finally rename streets, build one way train tracks and set stop signs at intersections. Emergency vehicles now move into a free lane when they are racing to get somewhere, so no more hold-ups on getting someone to the hospital. For more information on all of the changes in this free update, check out Paradox’s official forum.

I expect various reconstructions of Springfield to appear very soon, complete with the Duff Blimp and the ill-fated monorail. If this DLC has inspired you to take up a job as a virtual civil engineer, Cities: Skylines is currently on sale for 67% off until Monday, going for $9.60/£7.36. For those dedicated city planners, the Mass Transit expansion is available for $12.99/£10.99.