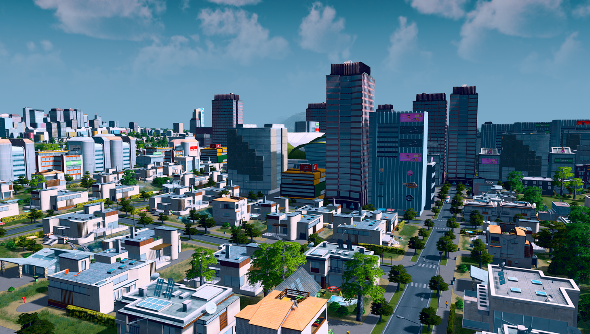 A tidal wave of SimCity comparisons and massive expectations has assaulted the Colossal Order developed and Paradox Interactive published city-builder, Cities: Skylines. EA and Maxis’ game spawned more disappointment than a Kinder Egg, and after the stagnant Cities XXL (no relation to Skylines), a lot of would-be city managers and mayors seem to be pinning all of their hopes on the new kid.

That’s quite a lot of pressure for the 13-person Finnish developer, and with the March 10th release date looming, that pressure is likely magnified. None of that bleeds into the game, though. It’s a relaxing sandbox that inspires the sort whimsy that leads to roads that depict genitalia or everything – from districts to people – being given silly names. 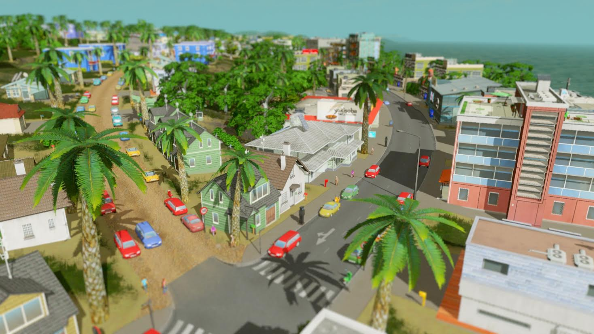 Cities: Skylines is a liberating city-builder, fat with freedom. It does, at first, put limitations on mayors, like restricting the density of industrial, commercial and residential zones, and locking extra swathes of land, ripe for development, but this is all temporary. Quickly, new options appear, and cities can become sprawling metropolises spread across nine zones, with each individual zone being the size of SimCity’s town-sized squares.

The macro stuff – running a gargantuan utopia, spreading it out and up – is tantalising, and it’s the most marketable aspect of the game, but it’s the micro elements that drew me back to the row of PCs set up for the press demo afterwards. It’s where the freedom to put your stamp on a city comes in; where the urban centres and islands of suburbia gain character.

Everything that has a name can be renamed. Cars, buildings, people – they can all be personalised. Entire districts can be given similar treatment. My main industrial park was known to all as Mankini Park, the most stylish of all dirty factory districts. Districts are actually pretty nifty beyond being able to give them silly names. Using the district painting tool, mayors can designate areas within a city, breaking them up into easier to manage chunks. Policies can be applied to individual districts and not just the whole city, tailoring them for areas with specific problems or needs.

A lot of people seeming gloomy in your new residential neighbourhood? Let them smoke pot. Too many new office buildings burning down? Put smoke detectors in all of them. Even forests can be turned into districts, if forestry sounds like an industry you want to dabble in. And, frankly, a city with lots of lumberjacks is a very sexy city. 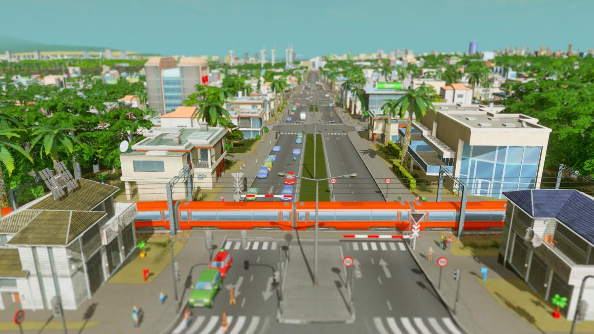 Mariina Hallikainen, Colossal Order’s CEO, is making suggestions over my shoulder. I’ve just started my first city, and I’m plonking down some water pipes and a lovely big hole for sewage to pour out of, into my beautiful clean river. Tiny arrows conveniently denote the direction of the stream, and Hallikainen points out that building my water pump downstream of the sewage would be a bad idea.

I drop the water pump right below the sewage pipe and cackle. Hallikainen has already seen the roads of her game used to draw towering cocks and slightly floppy, ambivalent dongs – all the fault of the cheeky American press – so a city of poo drinkers is just a drop in the ocean of silliness. She leaves me to it, and the citizens of Awesometon By The Water start guzzling faeces with wild abandon.

The result is, unsurprisingly, a widespread medical crisis. Those still able to walk a few feet without vomiting flee the city and I am forced, begrudgingly, to move the water pump and build a health centre. I do defend my initial decision. “I’m not a polluter,” I say. “I only use green energy in my city. I care about the environment, just not the people living in it.” I do care about their money though, so I stop poisoning them. 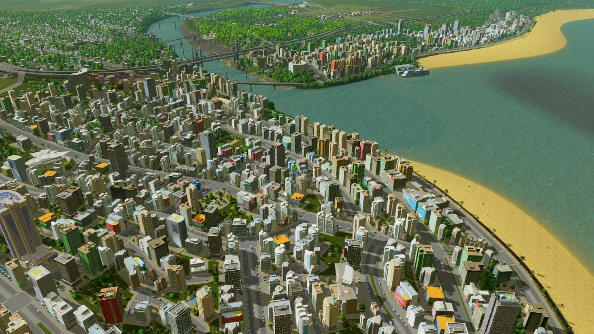 I was only able to construct a couple of wee towns in the hour or two I spent with Cities: Skylines, though I spent a lot of that time mucking around with turning everything into a district and feeding everyone jobbies. I did spot a few burgeoning cities on other screens, however. But it wasn’t until Colossal Order showed off one of the trailer cities that I could see just how vast they could be.

It was built using the same tools players will have, and was a fully-functioning megalopolis. Elevated motorways connected massive urban zones together, separated by rivers and parks, and it was so expansive that it was hard to soak it all in. And it should be. You can’t grasp New York or London from a quick flyover.

Cities: Skylines has the ambition of a massive city-builder, but the nuance and micromanagement of Colossal Order’s other series, Cities in Motion. You can draw willies and name everyone after Sesame Street characters, but beneath it all seems to be a serious, well-thought-out simulation of modern cities: their citizens, roads, utilities and the negative impact they have on the environment.

When it launches next month, some of the scaffolding will remain. Just as cities never seem to stop evolving, Cities: Skylines will continue to be developed. 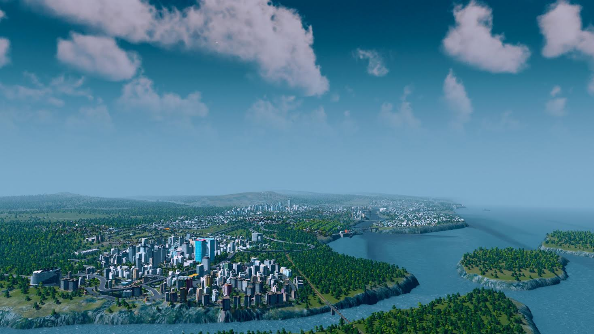 “Having such a small team, we can’t have absolutely everything in the game that we want,” said Hallikainen. “That’s just a reality. So we’re very committed to working on this for a long, long time after release. There’s a couple of things that I can mentioned that we don’t have, like tunnels, which we won’t have at launch. We will add those later. They’ll be a free update to the game, along with European buildings.”

Hallikainen hopes that the community will help the game grow, in regards to content, as well. Cities: Skylines has modding and Steam Workshop support, and new assets can be added to the game. The Steam Workshop support was already present in the build I was fiddling around with, and a few mods could be seen in the game’s main menu.

“With the modding tools, you can actually import your own assets. If you made 3D models with any modelling software, you can import those into the game. For people who don’t code or create art, they can use the asset editor to place props to make parks and intersections, and we hope to see a lot of these come up in Steam Workshop.”

Producer Jakob Munthe added that Paradox games often see a lot of mods being developed for them, but the difference between Cities: Skylines and, say Crusader Kings 2, is that this time, the Steam Workshop support isn’t being stitched onto it after launch, it’s part of the game. He says it’s a “blurred line between playing and creating”.

Cities: Skylines launches on March 10th without tunnels but with faecal poisoning.

Travel and accommodation was provided by the publisher