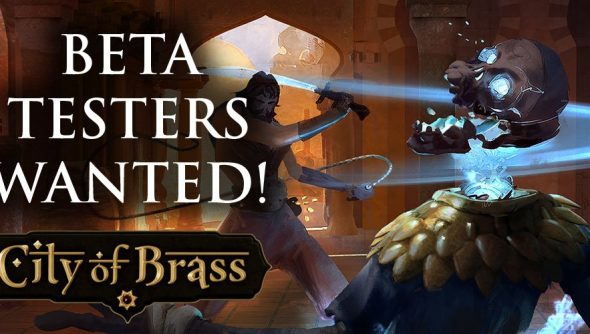 Guns are overrated, and the world needs more first-person swashbucklers. It’s been far too long since Arkane’s formative Dark Messiah, and Uppercut Games – a trio of ex-BioShock developers – agree. City of Brass is set to be their first independent release; an Arabian Nights-themed first-person action roguelike. In order to whip the game into shape in time for its Early Access debut next month, they’ve opened registration for a closed beta test.

Prefer your FPS to include shooting? Here’s 15 of the best on PC.

While first-person roguelikes are a popular genre now, with a growing number available on Steam today, City Of Brass stands out from the crowd. Uppercut’s experience with BioShock’s lush underwater cities ensure City of Brass is no slouch in graphics, even if the sand is a little drier, and the decision to eschew firearms in favour of Indiana Jones-esque whipcracking, sword-swinging, and genie-bothering makes for an exciting hook, grappling or otherwise.

Set in a cursed city rising from the desert sands, the game promises combat that balances swordplay and whip-cracking, both offensive and tactical. A thrown pot is often as good as a solid melee attack, and the many ornate hooks and loops detailing the city can be grappled onto, allowing for more freeform movement and access to higher levels. If everything comes together, this might end up feeling like a first-person Spelunky. 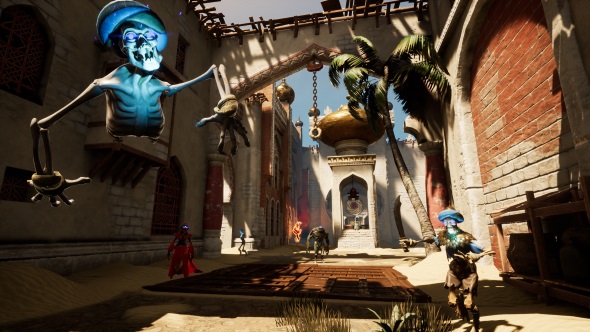 Enemies shown so far seem to be mostly undead in nature, with no shortage of turban-clad skeletons waving scimitars around. It’s a theme that not too many games have covered in recent years, and a brave mixture of elements. Only time will tell if the procedural generation will be enough to keep the experience fresh, but that’s what beta testing is meant to help shake out.

City Of Brass is set to debut via Steam Early Access on September 18th, with console versions following once the game is fully feature-complete.