Sid Meier’s Civilization is one of those game series: a hallmark of PC gaming, richly beloved by a cult following. It’s no surprise, then, that it’s always had a very healthy modding scene, but it’s doubtful that any mod in Civ history has had the same impact and staying power as Fall From Heaven for Civilization IV. 15 years after its first release, its latest incarnation – a mod of a mod of a mod of a mod, or modmodmodmod – is still in development. It’s called Ashes of Erebus.

Fall From Heaven is a total overhaul mod for Civilization IV, reimagining the whole game in a grimdark fantasy setting. But this simple description understates the sheer scale of change this mod delivers. It doesn’t just add a tokenistic magic system and elf ears on a few units. It basically rebuilds the entire game.

All that is only scratching the surface of Fall From Heaven, and the iterations made upon it, which now constitute a whole family of mod(mod(mod(mod))))s, make further changes. They are worthy of discussion in themselves, each representing the unique vision of another set of modders. 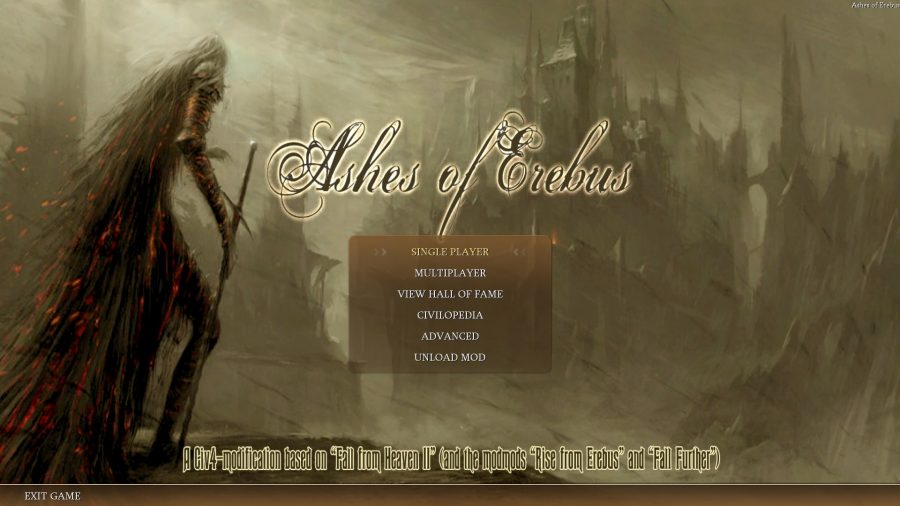 It isn’t a cheery game, it must be said.

Lead designer Derek ‘Kael’ Paxton – now an icon among the community on CivFanatics – released the first version of Fall From Heaven on December 16, 2005. As with most such projects, it began as a simple passion project. “I never thought anyone would play my mod,” Paxton tells us. “But the community on CivFanatics was so active and helpful that I wanted to share the few interesting things I was able to figure out.” It’s this collaborative spirit that came to define the modding scene for the entire Civ series, and Paxton’s contributions at this time were critical in its maturation.

The first versions were bad, but I figured out how to get a mage to cast a fireball, and people wanted me to keep going

Paxton based Fall From Heaven on his Dungeons & Dragons campaign. Although some of the lore has since changed, the “overall theme of the D&D world, the dark fantasy focused on corruption and redemption, of the machinations of the gods and the tragedies of men – those are the pieces that are core to me that remain in both.”

It snowballed on the CivFanatics forums. “The first versions were bad, like really bad. Like, a dragon using a tank model bad. But I was able to figure out how to get a mage to cast a fireball, and that was enough that people wanted me to keep going.” 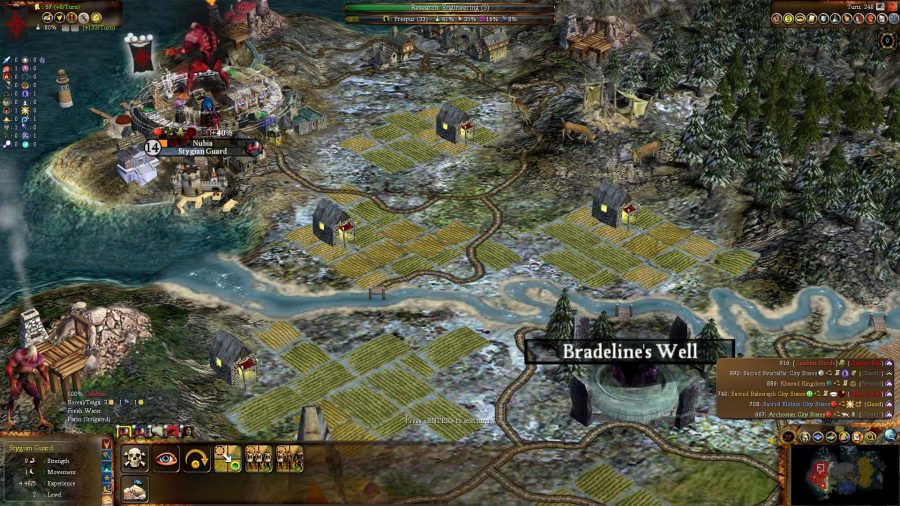 What is that in the top left corner, and why am I more scared of Bradeline’s Well?

Paxton found himself with a team (most of whom get shoutouts in the mod itself) and he’s quick to heap praise on them. “Fall From Heaven would never have been what it was without the talent of the mod team. I’m an ok programmer, but much smarter guys than me made the spell system. And I’m a horrible artist, so anything beautiful in the game came from someone else.”

Fall From Heaven was a success in those early years, but the team wanted to build. Luckily for them, Civ developer Firaxis contacted Paxton and asked if he would be interested in getting early access to the Civilization IV source code. Paxton jumped at the chance, and the team began work on Fall From Heaven II, this time with the Civ SDK to help create something truly special. On the day the source code went public, Fall From Heaven II was used as a showcase of what modders could build with it.

Firaxis must’ve been impressed, because the devs reached out to Paxton and the team for consultation, and even added parts of their mod to Civilization IV itself. Eventually, they hired Paxton to work on Civilization V. 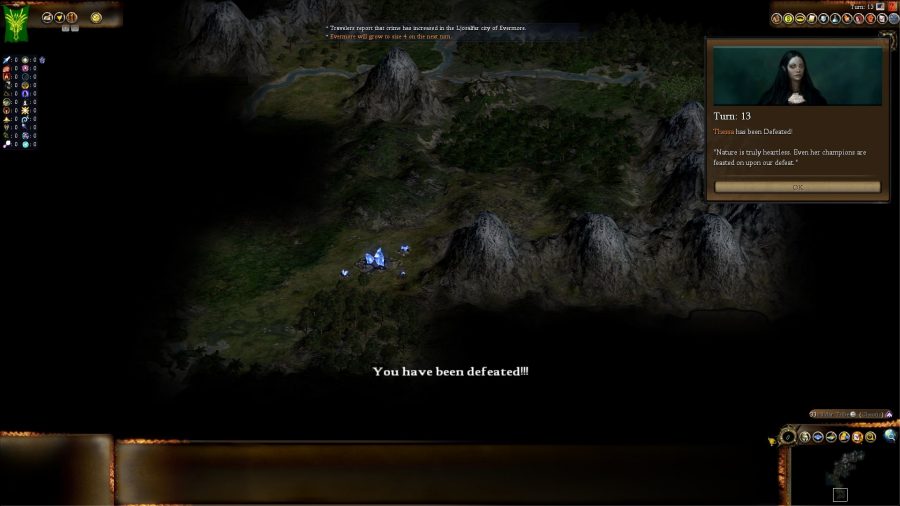 This game is also much harder. I’m not just bad, I promise.

Two years later, the final version of Fall From Heaven II released. It was a roaring success – it became the most downloaded mod on CivFanatics (a title it still retains, and by some margin), and received extensive press coverage.

Modding allows people to experience a wider variety of experiences, and to create their own projects. Stardock supports it in all our games

Support for the mod continued, but only in the form of bug fixes and tweaks. Paxton attempted to turn it into a standalone game – and was lent a helping hand by coverage on a very young Rock, Paper, Shotgun – but failed to secure the necessary funding. Instead, he took a job at Galactic Civilizations developer Stardock, where he later became lead designer on Elemental: Fallen Enchantress (alongside Jon Shafer, lead designer on Civ V). “That was almost ten years ago,” Paxton says, “and it’s one of the best decisions I have ever made.” He’s still with the company today, as its vice president.

This would seem a neat conclusion to the story of Fall From Heaven, but there is more to say. Because the mods made from this mod – the modmods – keep coming, to the point where we now have modmodmodmods, all built on the architecture of those which came before. It’s a little confusing, but the below chart should help. 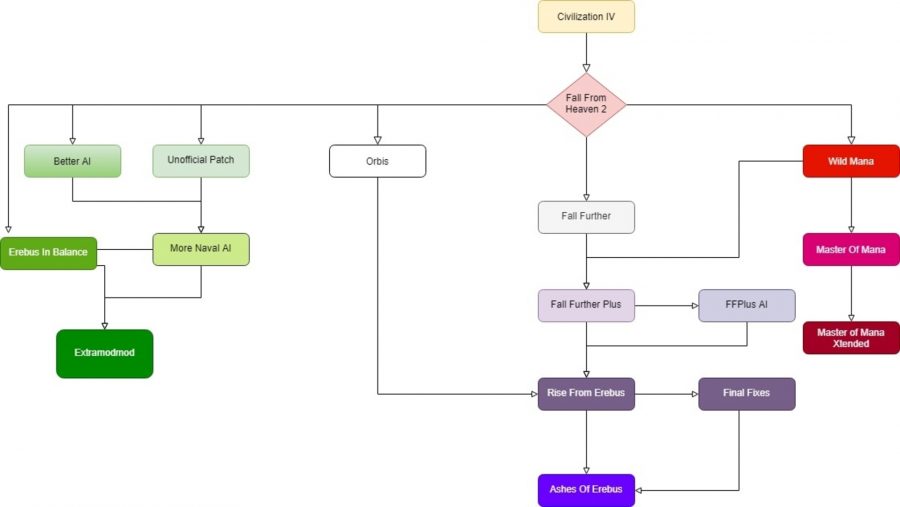 As you can see, the line from Fall From Heaven II to Ashes of Erebus is the most direct route, though it still involves different mod teams cribbing from each other like magpies, then adding their own cool concepts to be cribbed in turn. Different teams, working in the same world, steered by their own passion and curiosity, building and building until we arrive at the delightful mess that is Ashes of Erebus.

The Civ IV engine is over a decade old at this point, but Ashes of Erebus squeezes everything it can from it. Its development team is currently led by CivFanatics user black_imperator, and though the latest build was released last year, the team is still actively discussing their work on Discord. The mod doesn’t have the following it did in its heyday, but its community still exists, and it’s still in active development.

Related: Why Civ 6’s modders are getting frustrated with the game

This is not an accessible mod. It’s not clean, and bits of it are broken. Lore contradicts itself, if the developers put it in at all. Vital pieces of information for the story are on PDFs now lost to time. You have to have a basic level of comfort with coding to even install the damn thing. 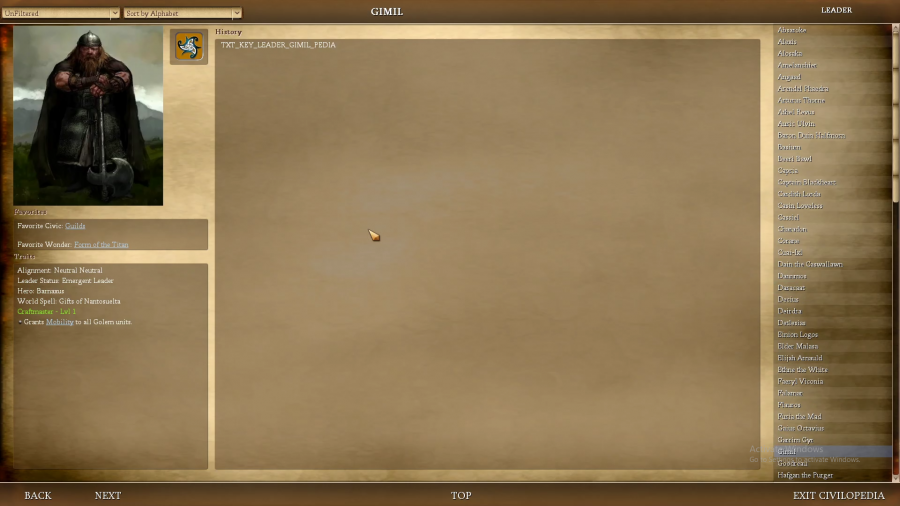 Expect this a lot.

Isn’t that sort of beautiful? This project, conceived in some D&D games over a decade ago, has turned into this insane hydra of development, with dozens of people over the years pitching in just because it’s fun and because they care. Ashes of Erebus is a perfect encapsulation of why modding communities are amazing places: it might be messy, incoherent, buggy, and hard to grasp, but its esoteric nature is part of its charm.

“Modding has the power to allow people to experience a wider variety of content and gameplay experiences, and to create their personal projects”, Paxton says about his love of modding. “We include support for it in all of our games, as Stardock has always done.”

Paxton hasn’t forgotten the passion project that launched his game development career. He’s still lurking on the Fall From Heaven subreddit, adding to the lore, keeping up with the community. He wrote a character-a-day series for the subreddit last year. His old mod team pops up from time to time as well. On continuing the series, he said “I would love to do a commercial version of Fall From Heaven, but then, I love all the game projects I get to be a part of.”

Maybe Fall From Heaven will one day have a polished, standalone release. Or maybe it’ll remain in its present, decade-old cocoon, a relic, yet one that is also in a state of constant, haphazard evolution at the hands of people who care. Maybe that’s the perfect place for it.

Fergus is a freelance tech and gaming journalist. A graduate of the University of East Anglia and student of interactive journalism at City, University of London, you can find him writing about all things nerdy on his blog or various outlets around the internet.