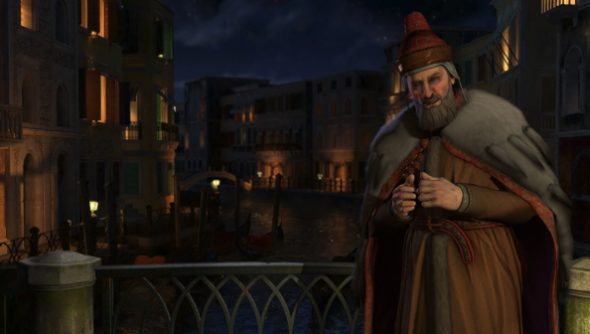 There’s a horrible moment in every game of Civilization V where the outcome of one’s bid for global domination becomes set in stone, and it’s merely a matter of waiting; maintaining an empire for a certain amount of turns until victory conditions are achieved. The late game – unless the player is attempting a military victory – just isn’t as engaging as the early game. It removes the excitement of discovery and locks civilisations into one path.

Brave New World is the solution to the endgame, adding a slew of new features that both expand the late game, making victory goals more flexible and dynamic, and change the way one plays through the entire 5000 year experience. The result: this is the best that Civilization V has ever been, and a high point for the series as a whole.

The impact of Brave New World can be felt immediately. The nine new civilisations on offer are novel nations, designed to showcase the new features of this expansion while also providing interesting ways to play a title many have already poured hundreds of hours into. Venice stands out the most, however. It might seem odd to add a city-state to the roster of superpowers, even more so when one takes into account Venice’s inability to generate settlers to expand its dominion.

The canal covered republic has many strengths, though, most notably its increase in trade routes, a new addition to Civilization V. Trade in this expansion pack has been entirely overhauled entirely. It’s gone from being a simple exchange of goods between two leaders to a transference of gold, culture and religion between cities. When caravans and cargo ships become available for deployment very early in the game after researching some low-level technology, they can be sent to foreign powers, city-states and settlements under player control. The latter merely provides a growing settlement with food, while trade with city-states grows one’s coffers.

It is trade with opposing civilisations that has the greatest impact. Profits are increased, especially if luxury goods are abundant, and you can manipulate a trading partner by exporting your religion and culture – but it can do the same. Trade is no longer just about acquisition – it’s now a lucrative but risky mechanic in which you can expand your empire’s reach while also trying to manage foreign influence.

Barbarian infestations and enemy raids are now far more meaningful thanks to these trade routes. Foreign civilisations and wandering barbarians may pillage routes, both land and sea, stealing gold and destroying the route entirely. A civilisation dependent on its trade network can easily be crippled if it doesn’t also protect it with ships and troops. A strong navy and army is necessary even when one isn’t at war.

Culture sees one of the greatest transformations in Brave New World. There’s a fleshed out cultural victory path, new Great Artists and their associated works, and tourism. Particular buildings, like amphitheatres and museums now have Great Works slots, and when a civilisation has amassed enough culture points it generates a Great Artist who can be commissioned to create something that can be attached to one of the aforementioned buildings.

These works of art, from Aristophanes’ Lysistrata to renowned symphonies are coveted by foreign tourists who, when they return home, will speak highly of the wonders they witnessed in your civilisation. Tourism expands and spreads a civilisation’s culture. Your chance of a cultural victory is improved when every other nation is awed by your people’s achievements.

Archaeology, one of the new research goals, adds yet another element to this heap of culture-focussed features. Once unlocked, teams of relic hunters can be sent across the world to unearth artefacts from the past. They, in turn can be slotted into buildings just like a Great Work. These objects are not random, either. The dig sites are actual historical locations, like a battlefield from a war that took place 300 years ago, or the site of a barbarian encampment, and the items found within are related to those events.

Foreign civilisations might not take too kindly to you plundering their ancient treasures, so it’s possible to donate the artefacts to their rightful owners, fostering a better relationship with another power at the cost of all the culture you might have gained from placing it in a museum.

The result: your world’s past isn’t just bought to life. It becomes a mechanic in itself.

The ultimate realisation of a civilisation’s culture and social policies is its ideology. By the 20th Century, there’s a very good chance that players will have exhausted the social policy trees – Civilization’s equivalent of a race’s talent and specialisations.

The three ideology trees – Freedom, Autocracy and Order – are substantial and replace the social policy trees of the same name. Instead of a few arbitrary unlockable bonuses, a civilisation’s ideology can be customised by selecting bonuses from a huge list. Two civilisations both using the Autocracy tree can have a completely different series of boons, with one focusing on social policies like universal healthcare, while the other augments its military might. There’s an interplay between these schools of political thought and culture, with citizens of foreign civilisations becoming so enamoured with your culture that they feel compelled to demand radical shifts in their homeland. The result might be civil disorder, or the AI can capitulate, changing their policies so that they are more in line with yours.

Trade routes, cultural expansion and the ideology trees peak with the advent of the World Congress. The first civilisation to both discover all other civs and also unlock the printing press can call the first meeting of this global body. They may then pass edicts with global ramifications.

Though it only appears late into the game, the World Congress (later the United Nations) might be the most significant improvement to Civilization V’s formula. A trading nation may curtail the power of another economic powerhouse by proposing sanctions or banning certain luxury goods like ivory. A civilisation aiming for a cultural victory might make a bid to host an important event like the World’s Fair, generating a great deal of prestige. A science-minded ruler could spur on the space race. There is a mind-bogglingly vast list of potential decisions, and while the end goal may ostensibly be world peace, there’s nothing stopping players with different victory goals from exploiting the congress. Using it to trigger conflict rather than stopping it.

With votes being transparent, civilisations often end up developing grudges.

When I was controlling Venice, I received many a threat from Poland, as I was proposing edict after edict that weakened their position. I banned the use of ivory, a resource it had in abundance, called for every civilisation to adopt my ideology and even demanded that everyone follow my religion. It almost ended in a world war.

The greater a civilisation’s culture and the more city-states it has enthralled, the larger number of delegates it may field to vote on decisions. The host civilisation – initially the one to call the first meeting, and after that whichever one is voted into the position – also gets a significant boost to its political influence.

Existing features such as exploration, espionage and religion are all improved by the new mechanics. Exploration can lead to founding the World Congress, espionage is now more meaningful thanks to the use of spies to help inform one’s choice of edicts, and religion has now been further weaponized, allowing it to be used to gain influence over foreign powers through trade.

Despite all of these impressive additions, it’s the flexibility of Brave New World that is most worthy of praise. One could spend thousands of years developing a militaristic superpower, only to attempt a diplomatic victory near the end by controlling city-states. A trade empire can, all of a sudden, transform into a huge military dominion, employing its vast wealth and many alliances to build up a large army quickly. Instead of deciding how to approach victory early on, players can now react to changes in the world, enjoying a more organic, dynamic experience.

Along with the nine new civilisations, eight new wonders and two extra scenarios (The American Civil War and The Scramble for Africa), Brave New World feels more like Civilization VI than a mere expansion. The art deco UI and the colourful map may scream Civilization V, but everything else innovation rather than iteration. It might have taken almost three years, but Civilization V is now the very best Civilization.