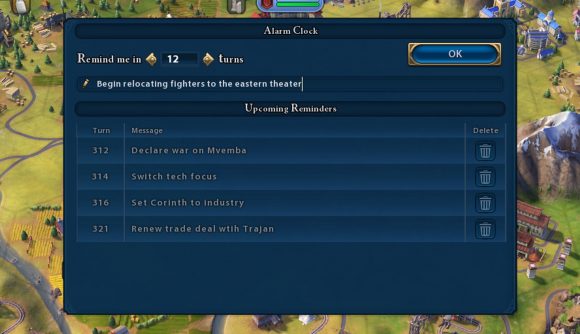 There’s a new mod in town – or empire, should I say – for Civilization VI that’ll make your dominion building a whole lot easier. There’s a brand-new ‘alarm clock’ mod that reminds you of all your future plans, so you can plan your world domination safe in the knowledge you won’t forget a single step along the way. Lovely.

Modder Isupeene’s creation, just uploaded to Steam Workshop, adds a simple but super effective new alarm clock feature to the strategy game’s UI, which you use to log and also keep track of your upcoming moves, sometimes many multiple turns ahead in your game.

You simply write your next play into a text box – an example the creator gives is ‘begin relocating fighters to the eastern theatre’ – then set when you want to be reminded (in number of turns), hit ‘ok’, et voilà. The mod will ping you with a reminder when it’s time for the step, which pops up as a pretty non-intrusive notification in the corner of your in-game screen. Neat!

“A new button is added in the top-right panel next to the Civilopedia,” the creator explains, which opens the alarm clock feature. “A single alarm can be set per future turn,” they advise, and “You can view and delete upcoming alarms in the grid view, which appears in the dialog after you’ve added an alarm” There are handy keyboard shortcuts, too, if you prefer to jump in and out of the clock easily.

The one thing you’ll need to keep in mind is that these upcoming alarms are not saved when you close a game, so, as Isupeene explains, “You’ll have to pull out a good old-fashioned paper and pencil if you want to save reminders between sessions!”

If you want to grab the Civ IV mod for yourself, head to the Steam Workshop page here and hit subscribe to download it. As ever, mod at your own risk! Also be sure to take a look at our list of the best 4X games on PC if you’re a Civ fan and keen to see what else is out there to try.