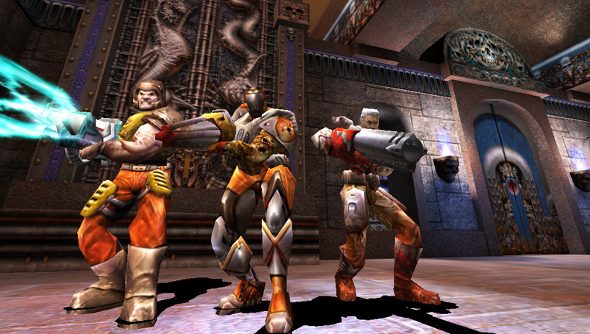 With Epic Games long behind him, Cliff Bleszinski wants to develop a shooter that couldn’t be further away from the testosterone-filled, linear Gears of War series. Chatting on the Pointless podcast, Cliffy B revealed that he has concept art and a pitch for a PC arena shooter absent cutscenes or scripted sequences, and all he needs now is a studio.

“It’s in my DNA,” Bleszinski said when he revealed that his pet project would be an FPS, promising that it would be a “PC experience that will hearken back to a certain type of game that we cut our teeth on.” The project will need a full studio to make it a reality, though, and while more and more PC titles are being developed by tiny teams, he doesn’t want that sort of pressure. “It will require a studio. As much as I’m impressed with No Man’s Sky, that’s four people. They’re going to be bleeding out of their eyeballs to get that thing done.”

But wherever he lands, it won’t be anything like Epic Games.” What I want to do is something that is familiar, yet different,” Bleszinski says. “I don’t want to work with the old guard, per se… The last thing i need is some marketing guy saying, ‘Well, traditionally this doesn’t sell well.'” He wants to remind people what shooters can be, taking a shot at Call of Duty: “A lot of these kids playing Call of Duty- I don’t think they know what a proper arena shooter is.”