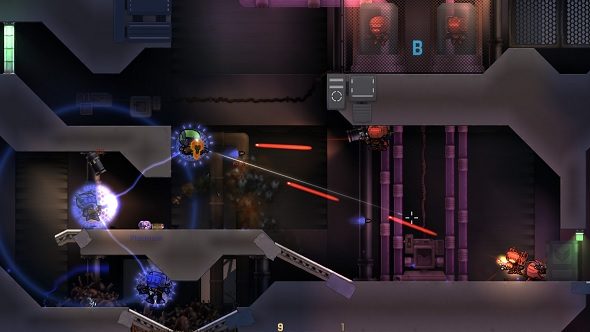 Imagine a 2D version of Call of Duty’s Search and Destroy game mode – two teams of four, one defending while the other tries to plant a bomb. But, in this case, rather than soldiers, both teams are made up of backflipping murderdroids. That is Cobalt WASD. This keyboard-loving spin-off is a multiplayer-only experience that is all about shooting the heads off enemy robots and looking as cool as possible when you do it. It was built on a PC, for PC, and has you playing as sentient PCs.

Never played the game this one is based on? Read our impressions of Cobalt right here.

Yes, this is a game that is absolutely built to play on the electronic obelisk tucked under your desk. You can tell it is fine tuned for mouse and keyboard from the start as movement feels slick and aiming is sharp. It’s a good job too, as positioning and movement are key, being essential to grasp the basic rhythm of every battle but also the nuances that give you the edge in higher-skill matches.

All matches begin with a visit to the shop, where you buy weapons, armour, and vehicles. Then it is time to flip, jump, and tumble into action across a variety of multi-layered maps. After each round – when one side is all dead or the bomb has gone boom – it is back to the shop again to load up with a bigger, meaner, more stupid arsenal. You earn cash by killing, and you get to keep your accrued weapons if you don’t die, your capabilities growing with each victory.

That basic loop along with the inventive sci-fi that distinguishes the weapons means there are countless tactical options to experiment with in Cobalt WASD. You can get rocket launchers that teleport you to the location of impact, grenades that slow the flow of time, energy shields, rocket packs, holographic boxes that shield you from incoming blasts, jet boosters, automatic rocket launchers, and more. When it heats up, it is carnage to see eight players flipping around like acrobats, firing all around them and pinging off robo-helmets with well-placed shots. 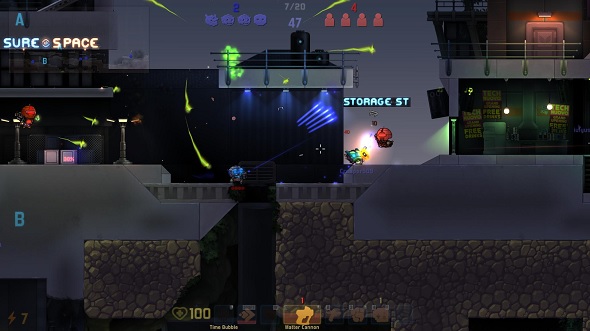 At first, it can get a bit confusing under fire because there is so much going on, but the chaos is almost beautiful once you learn to parse it. After a few warm-up games you will be shooting enemy rockets out of the air, triggering a time-manipulation field so you can Matrix-dodge through a hail of bullets before boshing someone with a sword, or hovering over the battlefield and raining down justice like some platinum-clad Pharah.

Cobalt WASD only gets more fun when you jump into the fray with a couple of friends, it being almost like a hyperactive take on Team17’s Worms – especially when you are using a grappling hook to swing above an enemy and drop a stick of dynamite straight onto their head. While not as strong as the single-player campaign of the original Cobalt, with its immersive sim-style freedom and inventiveness, this spin-off is one of those games I can see myself sticking on for 20 minutes of fun during my lunch break, only to be shaken out the zone by my editor loudly asking why I am still engaged in balletic robo-murder two hours later.