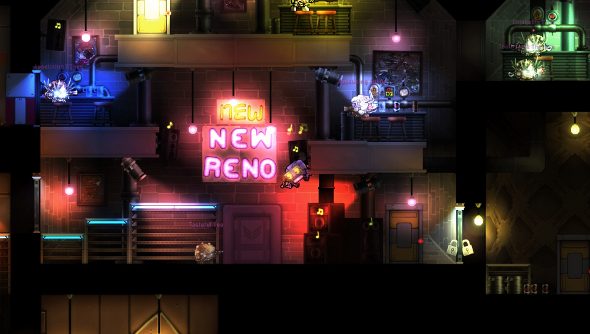 After just over four years of alpha and beta testing, Cobalt – developed by Oxeye Game Studio and published by Mojang – is finally finished. It’s a blisteringly fast side-scrolling action game with a spot of platforming and puzzle-solving where you, an adorable robot with a thirst for blood, have been deployed to investigate a missing colony of squishy humans by mostly murdering other robots and weird aliens.

The simple puzzles and exploration are fun, the story’s goofy, and the platforming is solid. Ultimately, however, Cobalt’s at its strongest when it transforms into an exhilarating ballet of death and mayhem.

John Woo has never made a movie or a game about a sociopathic murderbot on a mission to eradicate aliens and fellow automatons from a distant world. If he did, though, we can only hope it would be a lot like Cobalt. Woo’s thrilling action style was the last thing I expected from a game like this, but the nosebleed-inducing slaughter calls to mind Stranglehold, the videogame sequel to Woo’s Hardboiled, and stylish shooters like Max Payne. Only it’s more insane, more intense, more improbable.

The titular robot leaps, rolls, slides and dives into battle like a force of nature, always in motion, always killing. Sure, he could just saunter into an enemy-infested room and just shoot them, but where’s the fun in that? And such a mundane entrance is risky, too, since Cobalt can be blown to smithereens pretty quickly. Acrobatics it is, then.

It’s not all style and no substance, though. Cobalt’s fancy moves all serve a purpose. When he jumps into an aerial roll, for example, he’s able to deflect enemy projectiles, sending them flying back to the source. And while he’s rapidly spinning in mid-air, he’s also able to spray bullets taking out many more foes than he would if he just stood still like a chump. It’s a joy to watch, as well. He bounces around the place like an uncontrollable pinball, landing on unsuspecting bots and aliens, smashing their heads in before moving on to his next unfortunate victim. 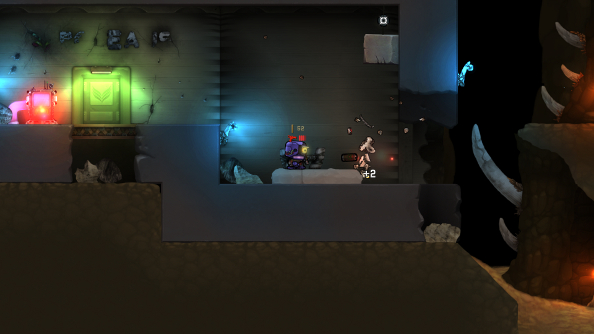 To keep Cobalt always moving forward, always on the offense, Oxeye have cleverly made many of his defensive abilities just as capable of killing a foe as his offensive ones. There’s the aforementioned rolling, and there’s a super-powered parry that has similar results, allowing him to punch and hit projectiles or explosives away or back at enemies. A variety of shields can also augment Cobalt’s fighting ability. Some of them can reflect attacks, again making sure that the little robot is always killing. He’s relentless.

When faced with explosives, it’s a bit like dealing with a physics puzzle: how do you use this against your enemy? Maybe you don’t want to simply bat it back to the guy that tossed the grenade; maybe you want to knock it up to a platform where there are a lot more enemies. So you need to get the timing and angle perfect. At normal speeds, you need lightning fast reflexes and more than a bit of luck, but the game occasionally slows down dramatically when you’re faced with impending doom, offering extra valuable seconds to judge the situation and maximise the carnage.

Sometimes it feels like Cobalt isn’t fighting and is actually just cleaning up. He can clear a room, with a bit of luck and skill, without even touching the ground. It’s no big deal. He just charges in and unleashes hell on everyone below. It transcends aggression. Yes, there’s death and murder and explosions and bullets flying everywhere, but amid the chaos there’s a simple elegance, like Cobalt has entered a relaxed, zen state. 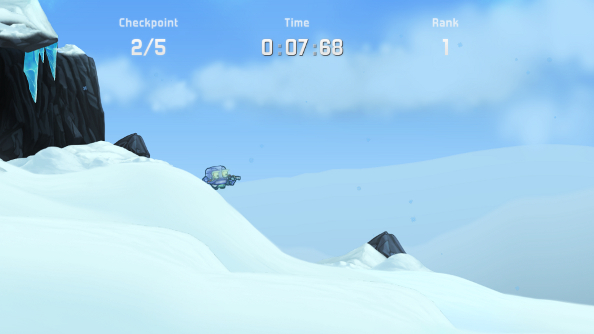 The story mode is full of rapid slaughter, but multiplayer and challenge modes offer up even more. Some of them task you with simply getting from A to B as quickly as possible, avoiding death as you speed across the landscape and soar over obstacles. Others might send you off to assassinate specific targets, with appropriate gear like sniper rifles and a stealth cloak. These challenges mix things up and sometimes offer a break from the breakneck pace of the game, but if you crave that speed, you can still go through an assassination challenge swiftly, choosing quick and efficient murder over slow and steady stealth. Either way, you’re going to be leaving a lot of death in your wake.

Cobalt’s action is unrivalled in the action-platformer genre. It simply doesn’t get better than this, with its manageable chaos and the myriad, murderous ways you can get through a mission. Everything – the multiplayer, challenge modes and confident style – is just delicious icing.