Putting together a few different Code Vein builds can seem daunting at first. Don’t be surprised if the excessive number of oddly-named components in this anime-fied Dark Souls-like RPG game go over your head initially.

There are Blood Veils and Blood Codes and lots of other blood-related items to keep track of because Code Vein is all about vampires and, as with every other proper noun in its lore, calls them ‘Revenants’ instead. But they drink blood. They’re vampires. We’ll try to move past this…

The cornerstone of a combat build in Code Vein is the Blood Code. Don’t get too hung up on which you try first. You can switch Blood Codes any time you like without penalty and Code Vein actually encourages you to experiment with them. At first, your chosen Blood Code will restrict which skills you can use while it’s equipped. Before long, through normal use, you’ll unlock the ability to ‘inherit’ skills (Gifts) and will then be able to equip them even while using a different Blood Code.

There are a lot of Blood Codes available in Code Vein, but let’s start with the by breaking down some of the in-game lingo you’ll want to know:

Here are the first four Blood Codes you’ll have access to with some tips on which Gifts to use with them: 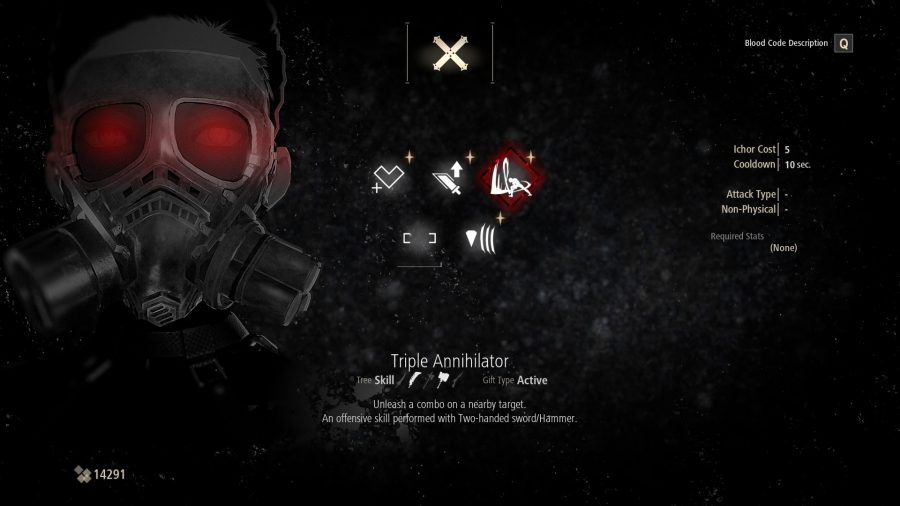 The Fighter class is one of the three default Blood Codes available. Of the initial three choices, it offers the most health, physical attack power, and ability to carry the heaviest weapons. The Fighter Blood Code comes with five initial Gifts – two passive and three active.

Since you have four slots available for passive skills, definitely equip both the passive Health Boost and Focused Stamina Usage. As for active skills, Adrenaline temporarily boosts your attack power, Blood Guard reduces incoming damage, and Triple Annihilator is a powerful combo skill that you can use with a two-handed sword or hammer.

Be discerning with your skill usage as a Fighter. You only have a base 16 Ichor to work with, meaning you’ll run out faster than some other classes.

If you want to dabble in skills from other Blood Codes, try out either the Ranger or Berserker (once you earn it early on). The Ranger has passive skills for increasing stamina and for reducing the stamina cost of guarding, which are both useful for a Fighter. The Berserker class has both active and passive skills that are great for upping the damage output of a Fighter. 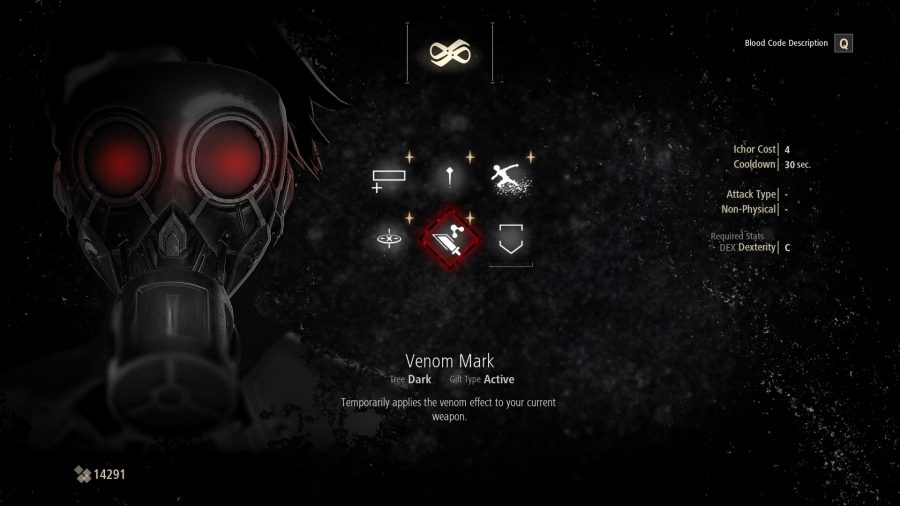 The Ranger class is another Code Vein default. It has two passive skills: Stamina Boost and Guard Stability. Its active skills are a bit less focused. One is a small projectile, another acts as a supercharged dodge ability, Venom Mark applies the “venom” debuff to your weapon, and Spoils Spotter will identify uncollected loot in your vicinity.

For a more focused Ranger build, you’ll likely want to pull in some Gifts from the Hunter class once it becomes available to you. Specifically, Ranged Impact (which increases damage of standard ranged attacks) and Flame Spike (a ranged fire attack) will add some much-needed additional ranged options to your Ranger arsenal.

The Ranger Blood Code also only has 16 Ichor available. Like the Fighter Blood Code, you’ll need to be careful not to chug it all away too quickly. 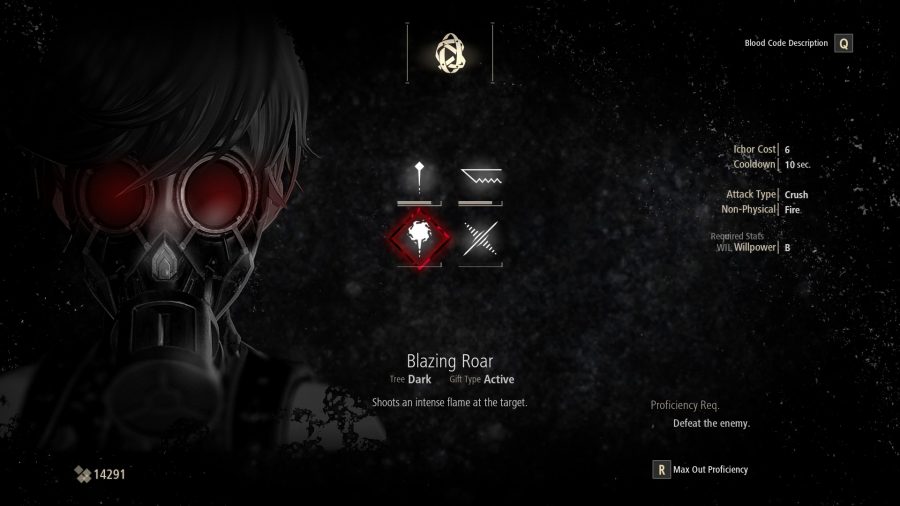 Of the three default classes, the Caster Blood Code focuses most heavily on Gifts. It has a total of 30 Ichor available so you’ll have much more freedom to cast at will during smaller fights. You may still need to keep an eye on your Ichor use during boss fights, though.

The Caster comes with only four initial skills – the ranged active skills Blood Shot and Blazing Roar, and two passive skills for increasing the drain ability on your weapon and the effectiveness of Dark type Gifts. With all that extra Ichor to spend, you may consider nabbing the Sonic Arrow and Shifting Hollow Gifts from the Ranger class. Shifting Hollow is the extended dodge ability that will provide extra mobility and Sonic Arrow is an additional option for ranged damage. 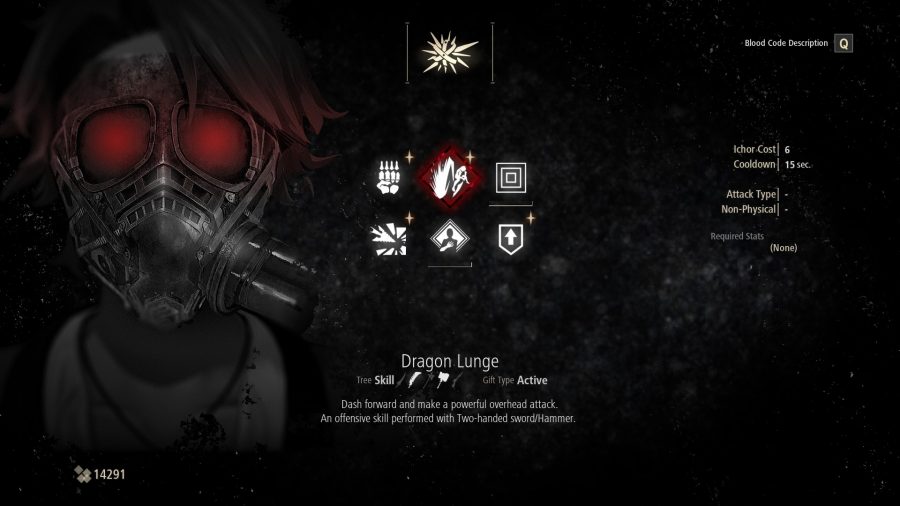 The Berserker class is the first non-default Blood Code you’ll earn in Code Vein. Similar to the Fighter, it focuses on damage output and high health. Unfortunately it has the lowest Ichor stock of the first four Blood Codes at just 10 Ichor. As a Berserker, you should be up-close with enemies dealing out damage so you’ll be able to recoup Ichor by using standard light and heavy strikes after you initially deplete it.

The Berserker has six starting skills and only one of them, Balance Up, is passive. The five active skills all focus on either resisting damage or dealing it out. For extra damage, you can grab a few active and passive skills from the Fighter Blood Code. The Passive Health Boost from the Fighter will help you Berserker build tank even better along with the Blood Guard active skill for protecting against damage. Since the Berserker has such low Ichor natively, consider what kind of fight you’re about to get into before you spend it all. A boss fight may call for active skills to mitigate damage before you start getting into damage-dealing skills.

Those are just the basics of Code Vein’s first four Blood Codes. After deciding on your active and passive Gifts, you’ll also want to choose the proper Blood Veil and weapon for your class. Remember not to be afraid of trying out new Blood Codes while adventuring. Using a Blood Code will allow you to master its Gifts so that you can begin mixing and matching Gifts with other Blood Codes for more diverse builds. Code Vein also does you the favour of preserving the Gifts you have equipped for each Blood Code, meaning you won’t have to readjust skills between classes once you have them the way you like. Now get out there and find those Blood Beads, Revenant!