They are as ancient as time, the sturdy men. They are pillar tall and stand in silent crowds of hundreds or more. Their large feet sink in the sweet soil and they drink up the water with their hungry toes. The sturdy men! With their long arms they sweep the sky and grab at the idiot sun. The sun does not care because it belongs to the men. And the men cradle the sun in their gnarled biceps and they suckle on its blinding honey. And the birds are there too. And the birds sing in the men’s hair. And the men are all trees.

That’s a poem about men, by me, the man who knows the most about sex.

Please note that this article contains references to the awful thing that is sex.

On your big adventure you encounter a veritable gaggle of five fuckable men, each one of them somehow hotter than the other four: a sort of logically impossible ouroboros of meat and hair tracing the puckered outline of a white-hot sex quintangle. But Coming Out On Top teaches us all an important life lesson: that you cannot have sex with every man. Instead you must choose just one man and focus all of your dialogue choices on him until he agrees to have sex with you, or hands you a folder of pornographic stills of the two of you rimming.

It is a very romantic game. 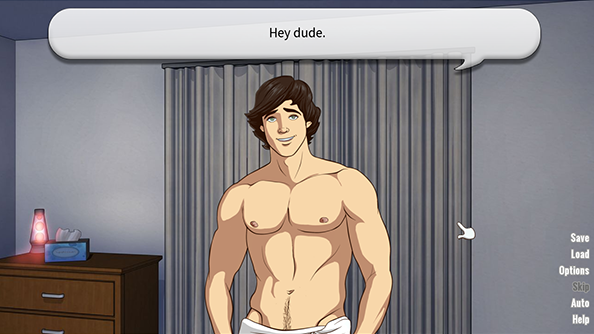 And even when you’ve pointed your love-car at the object of your affections and are accelerating towards him at full speed, sex-wise, it’s still possible to witness only some of that character’s sex scenes while totally missing others. Coming Out On Top is, at its heart, a game about romance, and it can often punish your eagerness to investigate its many, many descriptions of denim-outlined bulges by denying you a more gratifying sexual encounter later in the game. 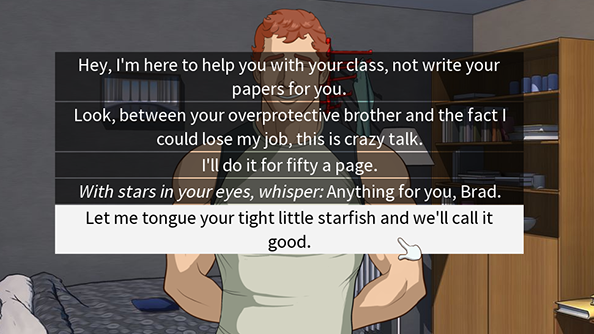 For example (and this is a real example), if you allow your roommate to drunkenly put his tongue inside your anus while you merrily ejaculate on to your chest, you’ll accidentally bypass the most eye-openingly penetrative series of drawings the game has to offer. The price of this regrettable mouth-to-bum-fun is high indeed, and it provides the unwelcome realisation that with every choice we make, a dozen multi-verse sex-doors slam shut. It’s almost enough to make you never want to make another decision again.

With all of this impulsively collectible smut around, Coming Out On Top is designed to be highly replayable, like Pokémon except instead of a Bulbasaur it’s a drawing of a man with two fingers all the way in you. You can repeatedly rewind the game to its beginning, using knowledge of your previous lives to pursue different dialogue options until you have eventually had sex with everybody it’s possible to ever have sex with, just like it was heavily suggested Bill Murray was doing in Groundhog Day. 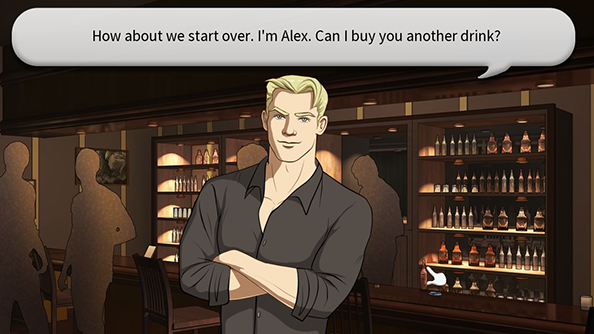 As is de rigueur for the genre (that is to say, I’ve now played two of these games and this feature appears in both of them), you can fine-tune the body hair of all of these men, adjusting each of them individually to be precisely as hirsute as you like. Beards can be toggled on or off, as can a collective mass of chest, arm and leg hair (it’s all or nothing in this area I’m afraid), but unlike the previous gay sex game I reviewed (called No, Thank You) it’s not possible to remove the pubic hair in its entirety. All of the men in this game are proudly and permanently affixed to some neatly groomed man-bushes. 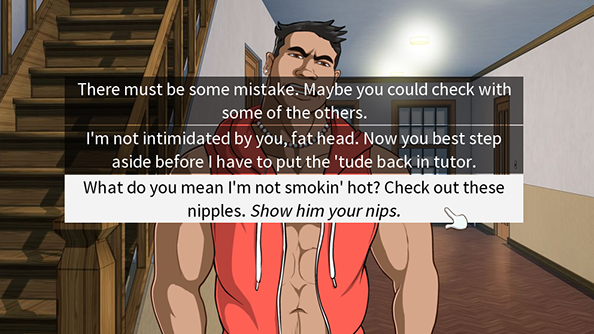 The game even culminates in your hottest and straightest friend eventually announcing his undying love for you, and inviting you to strap him into some four-point restraints and just go to town on him, like the rules of reality and narrative sense no longer even matter because the game’s almost over and why the hell not. It is strange, I think, that the game about a vigilante group of Japanese crime-fighters has the more believable sex scenes.

That said, Coming Out On Top’s comedy leaning does allow it to descend into the sort of wonderful madness that’s missing from the more po-faced sex games. Should you pursue a very particular set of dialogue choices and refuse to socialise with your friends or love interests, you’ll gradually become more introverted and strange, engaging in ever deeper and more philosophical conversations with your pet goldfish.

Telling it your secrets.

Coming Out On Top is available to purchase from Obscurasoft for £14.99.You can read more Having Lots of Sex With Men in Videogames here, if you like.