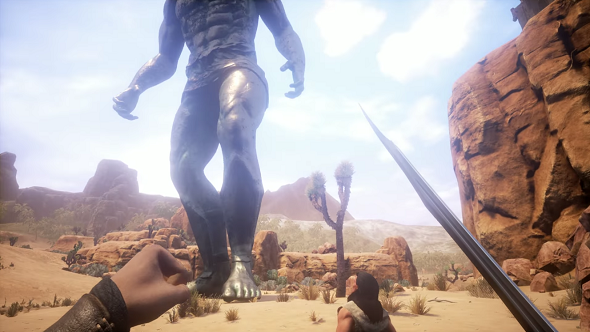 Update January 20, 2017: Conan Exiles is showing off more of its sandbox survival gameplay in an all-new trailer, from capturing thralls to building massive, trap-filled forts.

The new Conan Exiles trailer gives us a better look at its domination gameplay, where you subdue and recruit NPCs by hogtying them and dragging them home. You can get everything from archers to blacksmiths, though there are different ratings for each type – you can even recruit legendary heroes. I wonder if Conan himself if knocking about somewhere.

One of the most impressive things in the new trailer is the ability to take control of massive, screen-filling deities. Surely only the best players will become powerful enough to weild their strength.

“Take control of a towering god and drive your enemies before you as you crush their homes and conquer their land,” says Joel Bylos, creative director at Funcom.

“That is the epitome of player vs. player conflict in Conan Exiles. We are giving players a huge, detailed open world where they can go out build a village, a city, or a vast empire in their name. If you are on a PvP multiplayer server, just remember there is always someone willing to take that from you!”

Check the new trailer out above.

Original Story January 6, 2017: Conan Exiles is looking pretty swish in its new trailer all about building stuff. Well, building stuff and also destroying the buildings other players have worked so hard to erect, like a child kicking over a sandcastle that makes you envious.

The trailer shows off an impressive range of customisation options, with players able to kit their forts out with warning horns, the heads of defeated beasts, stylish rugs, meeting tables, forges, tanneries, and plenty more.

“They say that home is where your heart is, but in ‘Conan Exiles’ home is where you keep the hearts of your enemies,” says Joel Bylos, creative director at Funcom. “Building is a big part of Conan Exiles and you will need to build smart and build strong in order to defend yourself from the environment, cannibals, monsters, and of course enemy players. We are working hard to make sure players have powerful tools to build and defend their kingdoms.”

To staff your fort, you just need to head out into the wastes, clobber someone and drag them home on a rope. Getting the right people for the job can even unlock special upgrades, so you can make that club stronger for battering down other players’ walls. For more on how all that works, our Jordan wrote about the slavery system in Conan Exiles.

Alternatively, you could just use some explosives and bring structures down the easy way. When laying out your own base, just be sure to place the altar to your chosen god in the right place, or it might well be your walls that are crushed when you call these hulking allies to your aid.

Conan Exiles will be released into Early Access on January 31.