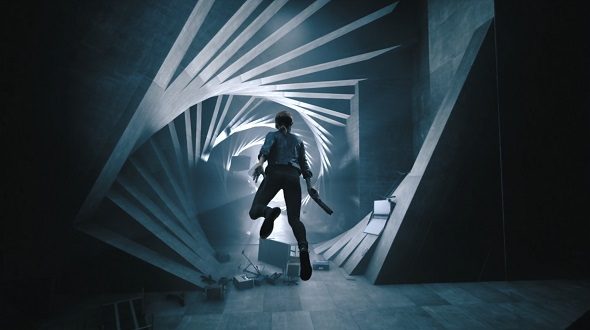 Remedy’s new game Control is a bizarre one. It’s an open-world game that is set entirely within one building. It’s not a normal building – the whole thing is vastly bigger on the inside than the outside. It will also change shape and rebuild itself in answer to supernatural rituals that you’ll learn as you progress through the campaign.

Perhaps the oddest aspect of the whole thing is your Service Weapon. You’re an agent and it’s your sidearm, but it’s unique and the capitalisation is earned because, as Remedy’s creative director (and face of Max Payne) Sam Lake readily admits to us: “It’s our modern take on the King Arthur legend.”

When you find the Service Weapon in Control, it’s like drawing the sword from the stone, you become the Director of the Bureau, a group Lake describes as “a secretive government agency that deals with the unexplainable.”

In that way they’re a little like Mulder and Scully in the X-Files, but also not. “They seek out the unexplainable,” Lake continues. “They investigate it, they contain it, and ultimately try to control it and it use it to their ends – so not necessarily the good guys but maybe the best we have.”

We still don’t know Control’s release date but we’ve learned that you will discover the Service Weapon early in the game and have to overcome a trial to prove that you are the rightful wielder of the gun and the rightful director of the agency.

The Service Weapon isn’t a fixed gun. As you progress through Control, you will unlock new forms the gun can take. These will open up new attacks and abilities for you to use in combat. Couple that with the technology Remedy has been working on with its engine, Lake sys that the team “wanted to push the physics and the dynamic destruction of the environment as far as [it] possibly could.”

You can also use telekinetic powers that let you lift and throw objects with your mind, so as you break the environment you have all the debris at your disposal to hit enemies about the face with. Of course, as your enemies also have their own powers, you could also be providing them with weapons to attack you.