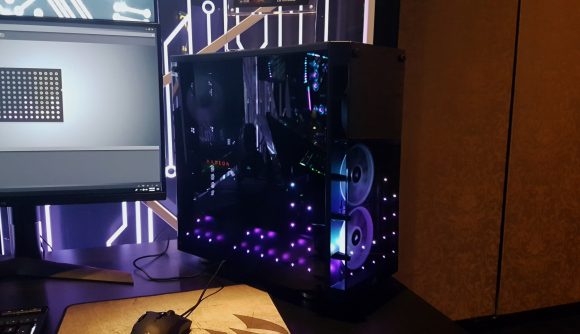 Corsair has teased a new secret project called Project Orion at CES 2020. Building upon its own-brand micro-LEDs, Capellix, the new design will cover tempered glass side panels in near-imperceptible LEDs for a stunning and totally not OTT PC gaming light show experience.

The details of Project Orion are slim so far, but it’s nonetheless an alluring prospect – even for an RGB cynic like myself. Essentially, it entails what it calls an “ultra-bright web” attached to a conductive film – which negates the need for cluttered wiring of any kind. Corsair would then integrate this film onto the back of tempered glass side panels on its own popular lineup of PC cases.

The result, it claims, is a near-impercetible array of LEDs that, when lit up, will hover across a tempered glass panel. These will be fully-customisable and addressable through its iCUE software, allowing for user custom profiles fitting with the overall theme of their build, or working in tandem with other compatible iCUE products.

“It’s an integrated ultra-bright web of Capellix LEDs attached to a nearly invisible conductive film,” Harry Butler, Corsair’s worldwide PR director, says. “The conductive film is then placed on the back of the tempered glass side panels of the case, providing some of the best lighting we’ve ever produced. The LEDs completely disappear and are absoluely tiny. The film itself is the electrical conductor. And it’s fully customisable in iCUE with all our lighting effects.”

The film would require pre-assembly by Corsair’s in-house manufacturing, so a case change would be required if you’re smitten with its rainbow flare.

We don’t yet have a precise launch date for Project Orion. However, Corsair says we’ll hear more later this year.