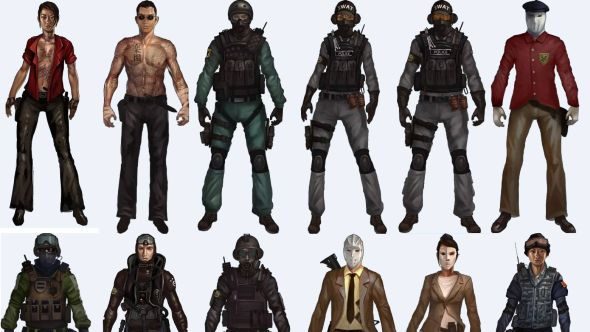 There were once going to be far more kinds of Ts and CTs in CS:GO. Posted on Reddit yesterday, a huge amount of concept art from the original version of the game shows off everything from Yakuza to straight-edge anarchists as possible pro/antagonists for rounds of dust2.

Here’s the rest of the best FPS games on PC.

Here’s the full image, with a higher quality version available over on Reddit.

Holy moly, where to start, eh? I don’t think the lady in the very top left is going to get too far against armed and armoured CTs without even buttoning up her shirt. Right on the other end are the mentioned anarchists, complete with Watch Dogs skull masks and straight-edge cross symbols. There’s a guy on the second line in scuba gear, why? What use is that going to serve? The besuited pair further along are looking pretty swish, and the masks are proper terrifying.

Talking of terrifying, spot the combine-looking fellow on the penultimate line? Far from some sort of alien invasion mode, he’s straight out of real life – the Georgian Riot Police department, according to the thread that originally saw the concept art posted. As one user put it, imagine happening upon that guy in a dark corner of cbble.

More practically, the main worry of more models is a change in hitboxes, particularly with large head ornaments like these Darth-looking guys. It could be hand-waved around by mapping to one hitbox, but players hate what they see not representing the truth, nevermind the issues lots of changes in colour could create. This, among other reasons, is probably why many of these were cut.