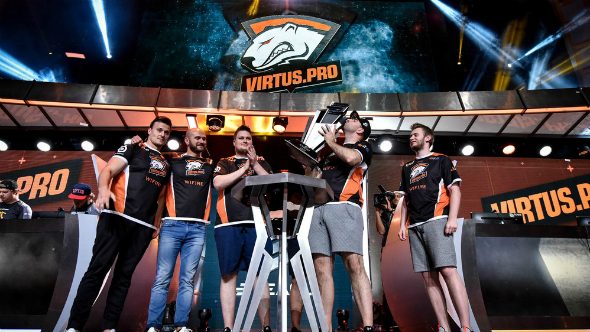 Polish side Virtus.pro became the first champions of TBS’s televised ELeague CS:GO tournament last night with a 2-0 cruise to victory over Fnatic.

Congrats to VP on being the best at one of the top FPS games on PC.

VP have been increasingly dangerous in the past months, as Fnatic have struggled to find a winning form again with Olof “Olofmeister” Kajbjer’s return from injury.

Both games in the best-of-three ended within regulation time as VP dominated as Terrorists on Cobble and Mirage with a 10-6 split between sides on both maps.

Fnatic’s inability to come up with a solution to the aggressive attacker playstyle was most obvious on Cobble as out of 11 rounds in the second half they managed to prevent a Terrorist victory only once.

Virtus.pro made their way to the finals through the Last Chance bracket having failed to qualify during the group stages of the season.

However, of the names missing from the final playoffs line-up this week, most conspicuous was SK Gaming, the two-time world champions who were removed from the tournament after completing their contract transfer from Luminosity Gaming – the team they had entered under.