In late August, a Twitter user asked their followers if they had any achievements that were completely inconsequential, but which they held dear nonetheless.

One reply stood out. “Back in 2005, I came up with a rough modification of an already existing Counter-Strike 1.6 map, which became popular worldwide and it’s still being played to this day,” Ramiro Olivencia, of Santa Fe, Argentina, tweeted. “It’s called de_dust2_largo.”

Searching for Counter-Strike 1.6 servers in Argentina in the mid-2000s always yielded similar results. Dozens of players gathered in room after virtual room, playing the same map until sunrise. It wasn’t the famous Dust2, but rather a modification of it that went on to carve out its own place in history, known in the rest of the world as ‘de_dust2_long’. But no one knew who to give credit to until Olivencia tweeted about it. He never acknowledged how successful his creation had been, both inside and outside South America. 15 years later, the reaction to his revelation still leaves him shocked to the core.

His modified map takes the path corresponding to A known as Side (or ‘Long’) in the original layout and makes it standalone. That was the whole idea. Planting the bomb wasn’t important anymore – it was all a matter of skill. Both teams contested an intricate loop that illustrated how clever Dust2’s original design was, learning more about their opponents and coming up with new strategies each round in what was essentially a Deathmatch. No matter which server you had chosen, all encounters had a sense of familiarity: multiple frag grenades hitting the middle of the map, the boom of AWPs being fired, and the hesitation of peeking from any corner for fear of catching a bullet in the head.

But this tradition wasn’t built in a day. It started back in December 2005 with a simple request, and the enthusiasm of a 15-year-old player who happened to have experience building maps. 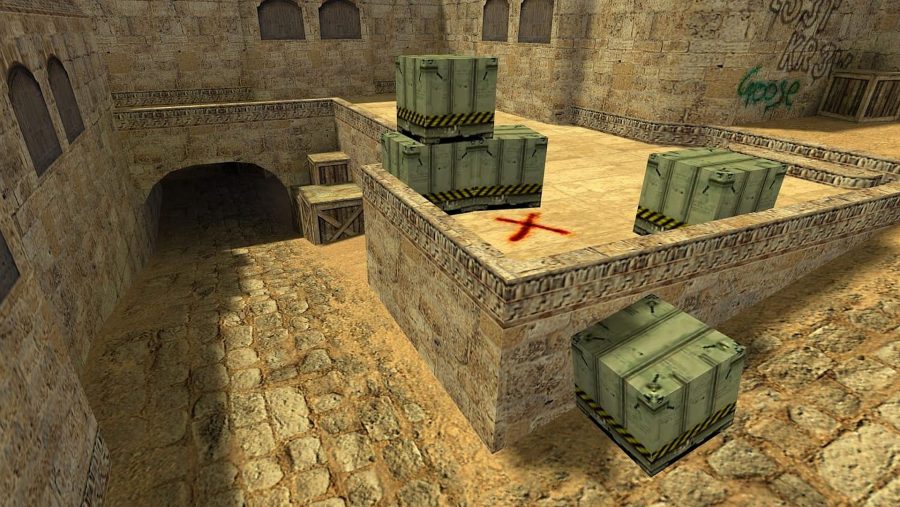 “The idea came from a videogame website subforum where I was fairly active,” Olivencia says. “Back then it was common to warm up in de_dust2 as players waited for their missing team members to show up and get the match started, following the ‘long only’ rule. We would type this in the chat for everyone to know which path to take and engage in combat immediately.”

I thought the effort I put in was what would pay off, but with dust2_long, it was the opposite. That's partly why it was the last map I made

But while the majority of players respected this rule, there were some who, either because they were trolling or didn’t know what it meant, would ignore it. It kept happening, until one member of the forum – whose name Olivencia sadly couldn’t recall, but it has been 15 years – suggested a simple solution: what if someone modified Dust2 to cut away the other half of the map?

By then, Olivencia had over three years of experience in the modding field. He was migrating from another community called Mapland, an initiative led by Fernando Maclen to replace CSMapas (‘CSMaps’ in English), the first Argentinian community dedicated to the modding scene around Half-Life with a focus on level design. This expertise and many discussions about map making led him to this moment, and he decided to take on the task himself. 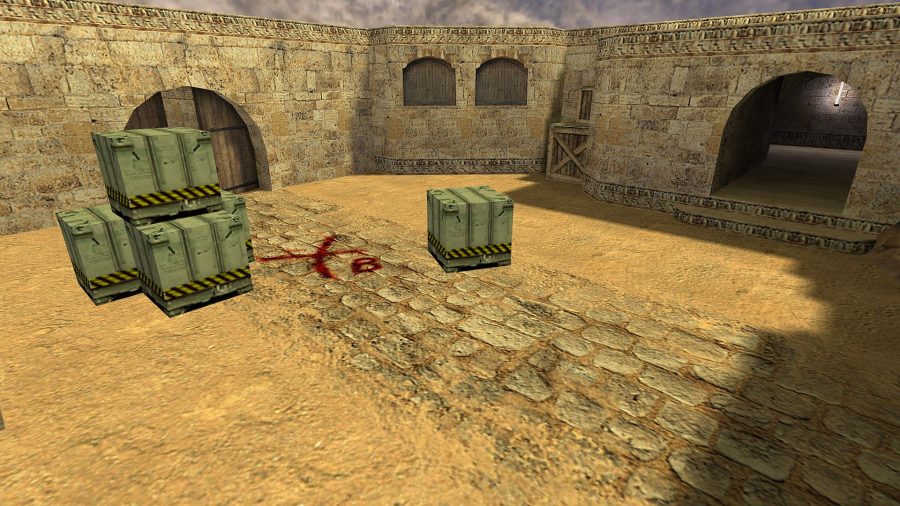 “I offered to evaluate the idea of making the map, which led to around two weeks of back-and-forth with the community,” he explains. “The feedback around the design was invaluable to me, including suggestions such as moving the CT spawn to the catwalk leading to A site. Once that step was finished, I began decompiling Dust2 using software called WinBSCP, and then using Valve Hammer Editor 3.5 to rebuild Side from scratch, making it the only path available. After three days of work, December 26 marked the date when the map was uploaded and shared for the first time.”

Read more: the best multiplayer games on PC in 2020

Over the following weeks, he was praised for his creation. As the map was intended to supply a clear demand, it garnered significant fame among local CS 1.6 players. Olivencia noticed two immediate effects on the community. First, he found people would reach out to him asking for advice in creating their own maps, which he recalls fondly. Another group, however, thought he was the admin of the server where the map was hosted. Turns out the confusion came from a readme the author had included in the folder that included his email, where people would go and ask him to kick players who were using cheats.

This was the only evidence linking him to the creation of the map. For some time, his small success inspired a new subforum dedicated entirely to mapping, but it soon fell inactive as the momentary interest never quite took off as he expected. Olivencia felt frustrated over the lack of engagement, going as far as to consider it a personal failure, and ended up stepping away from the mapping scene entirely. “Aside from telling my friends that I was the person behind the map during my teenage years, I never expected it to have such repercussions on players, gaining this grand popularity over time.” 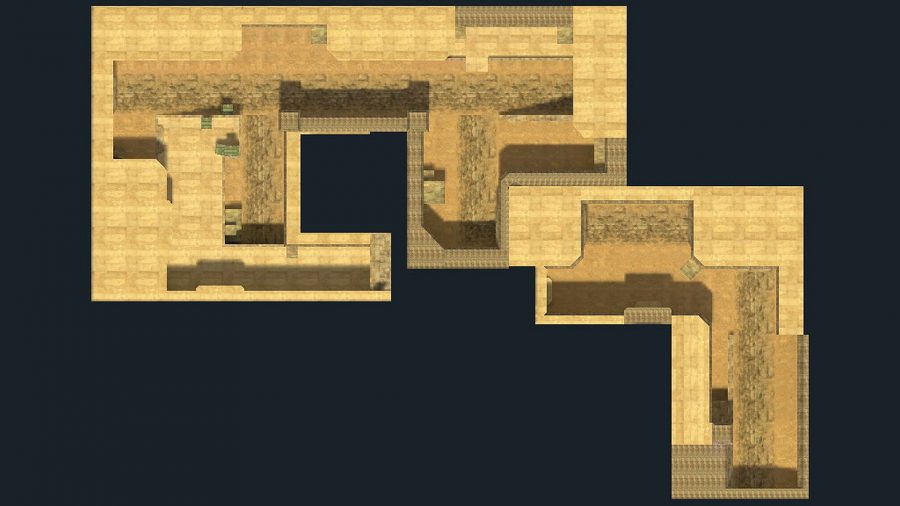 The map’s simplicity was another source of frustration for the author. In his three years in the modding scene, spending countless hours and using dozens of diskettes in his local cyber café to download manuals, textures, and other resources so he could keep practising on his Pentium III without internet connection, he had learned a lot, and had created far more complex maps.

If Valve were to hear about how much this map meant for Argentinian players and do something about it, my teenage self’s life purpose would be fulfilled

These included de_minicbble, de_sandtemple, and gt_legov2 – a Lego-inspired track for the Half-Life Rally mod. These were the result of the inspiration and techniques derived from Dust and Dust2 creator Dave Johnston’s tips on level design, as well as using textures created by Philip Klevastav (known as Blazeeer! back then), a developer who went on to work on Day of Defeat and Overwatch. But they never gained the attention Olivencia thinks they deserved, and for what he considered a small side project to garner such attention instead was frustrating.

“In retrospect, I didn’t quite understand how creating fun maps that players would enjoy was far more important than refining aesthetic and technical details that simply took a lot of work. I was convinced that the effort behind a map was the thing that would pay off, and looking at dust2_long, it was the complete opposite. And it’s part of the reason why it was the last one I made.”

He didn’t look back on any of this until that tweet – apart from a discovery in January this year when he found a backup DVD with files from his mapping era. He uploaded them to Github to make the map open source, and asked GameBanana for credit on the original page, where you can find him as ‘mapper22’. Out of curiosity, he ran a quick Google search and stumbled upon three pages of results. But his recent tweet has surpassed all expectations.

“There were some hilarious responses where people compared me to Lionel Messi or told me that I should add this to my resume,” Olivera tells PCGamesN. “Others were unexpectedly touching – a person told me that years ago, when his parents got divorced, he didn’t spend much time with his dad due to his job. But whenever they had a moment for themselves, they would go to a cyber café and play my map. I think stories like this stir feelings in anyone.”

Related: CS:GO is one of the best FPS games on PC right now

Even if he didn’t specifically continue working on maps, he’s been working as a software developer and systems engineer for years now. All of this has helped him to reconcile with his past frustrations, and to acknowledge that he had a certain talent for map design that ended up unexplored. But as he tells us over email, perhaps it’s not too late.

“Some people suggested that the idea behind the map might have influenced the creation of Wingman mode in CS:GO, as it essentially showcases shorter versions of already established maps, but I feel they would have done the same with Dust2 as an homage,” he concludes. “Of course, after all the attention during the past few weeks, I’ve been feeling the urge to end the cycle with a modern version of de_dust2_largo for CS:GO. And if Valve were to hear about how much this map meant for Argentinian players and decide to do something about it, my teenage self’s life purpose would be fulfilled.”