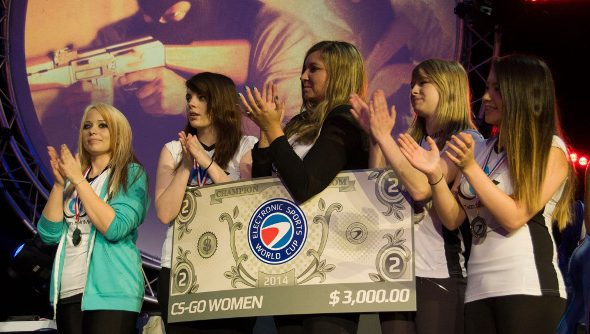 There’s no reason that e-sports should have to follow the path laid out by traditional sports.

There’s no reason why a pro gaming version of Ronda Rousey should ever be denied a chance to step into the ring with a male heavyweight, or why a group like the US Women’s National Team shouldn’t be able to compete for an unequivocal world title. There’s no reason, in other words, why women shouldn’t have as much presence and notoriety in e-sports as men.

But if you look at the landscape of competitive gaming, it’s overwhelmingly male-dominated. In its third year of existence, the League of Legends LCS has just had its first woman qualify for League’s highest tier of competition… and she has already stated her intention to step-down from her position before ever playing an LCS game. A form of international sporting competition where everyone is theoretically on equal-footing has resulted in a gender imbalance that places the professional scene far behind traditional sports when it comes to giving women space to compete, and an audience that cares about them.

The issue is multifaceted, of course, but in talking to women around e-sports, you could describe the issue as one of discouragement vs. encouragement. The former is why women are so hard to find at the highest level of gaming. The latter is why Counter-Strike has developed one of the strongest women’s e-sports communities that puts most other competitive games to shame.

“I don’t want to use voice chat. It’s worst on the more casual servers. As soon as they see I’m a girl, they have something to say,” explains Heather ‘sapphiRe’ Mumm, a Counter-Strike veteran with Team Karma whose career goes back to the game’s beginnings as a newly-acquired mod.

“They have missions in CS:GO now, and I had to do a mission on a casual server, which is really painful. But I was just going to do the mission, and I was doing well… and immediately I’m called a hacker. Because there’s no way a girl could be that good. But, these people on a casual server who had just picked up the game couldn’t believe I was destroying them. I don’t change my handle anymore, but I refrain from putting it out there that I’m a female because I just don’t want to deal with what they have to say.” 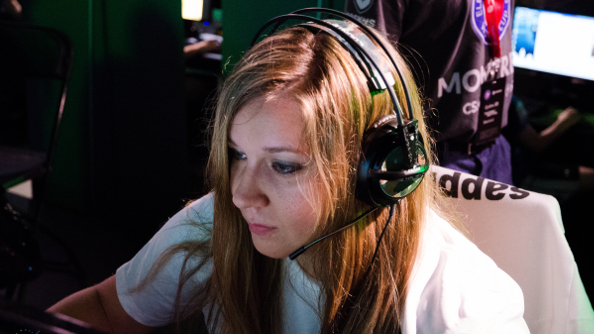 The single biggest reason for gender disparity within professional gaming is simple math, according to Mumm. Only a very small fraction of any population of players will be able to compete with the best of the best. Out of all the men who play Counter-Strike across Europe, how many develop competitive ambitions and start to pursue e-sports seriously? And of that number, how many are good enough to play on a Fnatic, or a Na’Vi, or a NIP? You’re talking about dozens of men by this point, perhaps fewer.

But women who play competitive games will face a lot more discouragement and harassment before ever making the decision to try and go pro. And it starts with the first encounters they have, on the lowest tiers of the ladder.

“I used to use the name Kaitlyn in SC2, and I just got so much random hate. I still use that name when I compete, but I don’t use it online anymore,” says Kaitlyn Richelle, a professional StarCraft 2 player. “In CS:GO, when you get to higher levels… people get a lot less toxic. But when I’m trying to rank up and I’m starting on Gold Nova, people are insanely toxic if I ever say anything, or they’re very patronizing. I stopped playing CS:GO. I do not play that game alone. I will not play that game alone, even though it was my second favorite game after StarCraft. I haven’t played it for a year.

“People say, ‘Well, everyone gets trolled. Everyone gets harassment.’ But it’s really bad. Anytime I would talk. I’m a strong person, and it still ended up affecting me.” 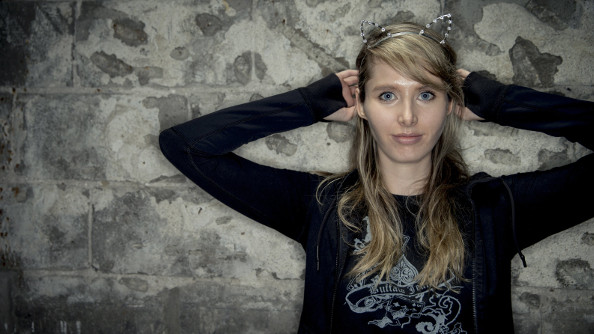 So it’s not surprising that fewer women overall choose to pursue competitive gaming. But the ones who do face even more obstacles, the foremost of which is: how on earth are you going to survive as a pro gamer?

Again, it’s hard for anyone to make a career in this realm. Most games can’t support more than a handful of full-time professionals at the highest level. Everyone else has to either get comfortable with poverty, or work a day-job, or find some other way to make gaming pay. And that often means streaming.

“Look at Twitch on some random night,” Mumm says. “Look at the top streamers. At least 50% of those are girls. And most of those girls are more there for entertainment, not really to show off their skill. So then… it’s funny, because it’s the guys who are giving these girls all these viewers, but it’s also the guys saying, ‘Wow, I can’t believe this girl has all these viewers. She’s not even a good player. She doesn’t deserve it.’”

There’s also a persistent distrust of women on streams. That they’re not being genuine, and are instead manipulating their audience. They are accused of living off the fact that they are ‘fake geek girls’ and taking advantage of a largely naive, heterosexual male audience. 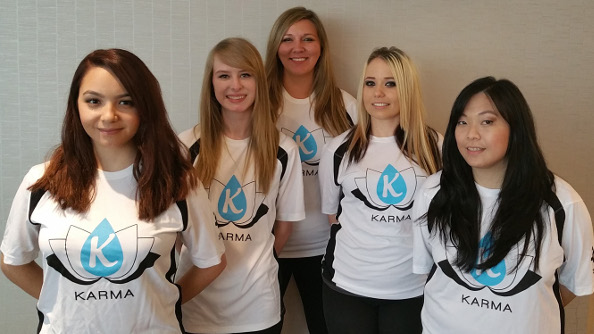 But of course, Richelle points out, the same could be true for most of the men.

This is not an exaggeration. When women attain high levels of achievement in games, accusations of cheating or fraud are never far behind. Subreddits that will offer effusive congratulations to male pro gamers who reach a high skill tier will launch investigations of women who do the same thing.

Richelle went through the same thing when she reached Grandmaster in StarCraft 2. It’s a bitter memory, because it tainted an important milestone in her development as a player. It’s also an example of why women can’t just shrug off online harassment and misogyny. The stakes are too high, and too personal.

“I quit everything in my life. However much student debt I have, tens of thousands of dollars… I ruined personal relationships. All to pursue e-sports,” she reveals. “I’ve been doing this for years, making nowhere near as much money as I would working as an engineer. So when you’re doing all this and you get Grandmaster, and you’re so happy that you cry for 30 minutes, and then there’s all these insane levels of hate? ‘Just grow thicker skin’?! I quit everything for this. This isn’t just a matter of growing thicker skin. That’s insane. There’s no way other people would be okay with this.”

For Richelle, two years of working hard within e-sports hasn’t yielded a lot of great competitive opportunities. StarCraft 2 is a pretty dismal game for anyone outside of Korea who hopes to support themselves as a competitor. The best North American players struggle to reach a playoff bracket in most tournaments. Richelle, even as a Grandmaster, could not last a month if she relied on tournament winnings.

But it’s not winnings that sustain pro players. It’s sponsorship deals. Those require exposure, however, and most women who play StarCraft won’t get much more than the odd main-stage appearance at an open-bracket tournament, before the field gets narrowed down to the top players.

This is why Counter-Strike punches so far above its weight when it comes to the women’s scene. Counter-Strike has a tradition of women’s tournaments, thanks in large part to the Electronic Sports World Cup, which has run them for years. Women who play Counter-Strike at a high-level can expect to get time on stage, in front of a live audience and lots of stream viewers.

“You’ll see as soon as a tournament is announced that there’s all this roster news. ‘This organization picked up a female team, or these five girls came together.’ So I think it’s really kind of the fact that these tournaments exist that drives teams to form,” Mumm says. “And you know a lot of these girls still play in online leagues against other males. But it’s really the female events that drive all this. When sponsors ask what tournaments we want to go to, it’s the female tournaments. Because that’s where we play on the same stage as the men.”

Yet women-only events often get criticized for being somehow unfair. Because there are no meaningful biological differences when it comes to men and women playing a videogame, the argument goes, it unfairly aids women to give them a separate tournament.

Because they have their own competitive landscape, even it’s nowhere near as lucrative as men’s tournaments, women in Counter-Strike often hear that they don’t deserve to earn prize money from a tournament stocked with inferior teams. Or, if they play on a mixed-gender squad, that they didn’t deserve their roster spot and it should have gone to a more deserving (male) player.

“If I stumble,” Mumm explains, “it’s, ‘Go back to the kitchen. You shouldn’t be playing.’ If we got sponsorship and I got a mouse pad? ‘You don’t deserve that mouse pad. A better team deserves that mouse pad.’ Every little thing.”

E-sports fans sometimes have a fixation on what certain people do or do not deserve. Perhaps it’s because in e-sports we can allow ourselves to believe uncritically in meritocracy. Game results are objective, so everyone should get exactly what they deserve according to their skill. That online gaming culture ends up alienating most women before they can ever contemplate going pro, or that it does not offer nearly as much support to women’s teams and players, is immaterial. Once the lobby timer counts down, the only question should be, ‘Who is better?’

The day may come when women’s tournaments are outmoded. But if we’re ever going to see the kind of gender parity that could make them obsolete, it will be in part thanks to women’s tournaments, because they encourage women to participate and raise their game. At the moment, however, they’re largely confined to Counter-Strike, which leaves lots of women who aspire to careers in e-sports out in the cold.

“When I was competing in women’s tournaments, I actually felt more motivation to do better. You know, when someone is much better than you, you don’t feel the same kind of motivation to get better. Then it feels like it’s out of your reach,” says Richelle. “When there are other people that have a similar background and are better than you, but the gap is smaller, I think it’s naturally more motivating. You can use that as a stepping stone. Women’s tournaments are more of a stepping stone to get to a higher competitive level.”