In CS:GO, as in soccer, North America’s women absolutely crushed their rivals this weekend at the Electronic Sports World Cup in Montreal, while the Cloud9’s men’s squad was once-again narrowly beaten by Eastern Europe’s Na’Vi.

While the victorious CLG Red Counter-Strike team probably won’t be getting a ticker-tape parade down New York’s Canyon of Heroes, the results at the ESWC did offer an interesting contrast between regions within CS:GO, and between CS:GO and other eSports when it comes to women’s competition.

It seemed like a minor mercy that the women’s final preceded the lopsided men’s CS:GO final in Montreal. There was very little doubt about how Cloud9 would fare against Na’Vi, a team that was almost flawless at ESWC this weekend and which has been one of the top teams in Europe this year.

By way of contrast, Counter-Logic Gaming Red (formerly sponsored by Ubisoft under the name UBINITED), a Can-Am women’s team, seemed to be in another league compared to the other women’s squads at ESWC this weekend.

Their finals opponent was Games4u, a new team out of Europe that’s only been playing together since the spring. Despite their lack of experience as a squad, G4U squeaked out of the group stage and into semis, where they smashed Team Acer in two maps. G4U’s underdog dream came to an end against CLG Red, however, who walked-over G4U 16-7 on the Cache map before closing-out the series on Inferno. CLG’s ability to make fast reads and coordinate perfectly at critical moments overpowered G4U, who were often a step behind the American squad. The championship gave the women of CLG Red $7,000 in prize money and the crowd in Montreal some hometown heroes to cheer for, especially Montreal’s own Catherine Leroux.

When it came time for the men’s final, the outlook was much grimmer for North America. Cloud9 is one of the very best teams in a weaker region. With American FPS talent divided between CS and Call of Duty, and without the kind of sustained Counter-Strike tradition that Europe has enjoyed for over a decade, North America hasn’t been able to threaten the European powerhouses in the Global Offensive era. Cloud9 has been knocking on their door, lately, with a runner-up to Fnatic a week ago at ESEA.

For a while, it definitely looked like viewers were being treated to yet another eSports stomping of an NA team. Na’Vi obliterated C9 in the first map on Inferno, dominating the CT side and taking the map 16-3. Cloud9 looked firmly outclassed and, despite their improving play in recent weeks, didn’t look like they belonged in a final against Na’Vi.

But C9 rallied impressively. Despite being down by quite a few rounds on Dust, as Na’Vi hammered them yet-again as the counter-terrorists, Cloud9 started battling back in the 11th round. While Na’Vi relied on lethal snapshots from AWPers GuardiaN and Edward, C9 started using storm-tactics overpower the European squad. Despite some serious missteps, they took Dust2 16-14… only to lose a pitched battle on Overpass 14-16. 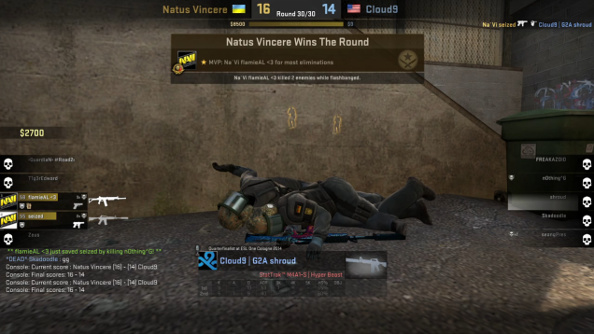 Still, Cloud9 have offered European teams their most serious challenge from NA in ages and, if not for a few miscues against Na’Vi, could have been ESWC winners by the end of this weekend. There was a lot for NA Counter-Strike fans to take heart from at ESWC this weekend.

It was also nice, once again, to see a tournament spotlight women’s competition. This is something that ESWC and CS:GO tends to be better about than other eSports. It was great seeing women’s teams get time at center stage, on the main stream, and as competitors in an important tournament in its own right. It would be nice to see more high-profile women’s CS:GO events in the future, which could encourage more women into the game and maybe raise overall play to a higher-level.

Creating separate women’s leagues will, hopefully, not be a permanent feature of eSports. At some point, I would hope they are unnecessary. But right now, as a way to make it clear that eSports are for everyone and that women have a role beyond being fans or streamers, the ESWC seems to have the right idea.

Besides, North America needs a chance to win at SOMETHING.