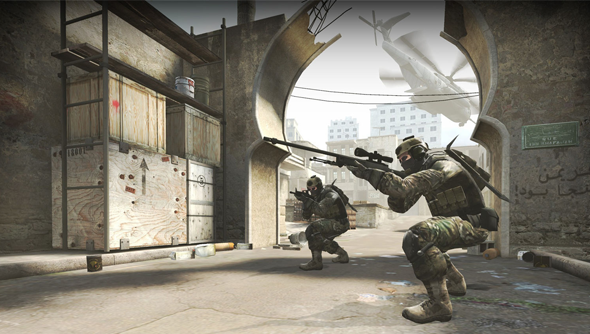 August saw Counter-Strike: Global Offensive enter the Valve family portrait alongside Team Fortress 2 and Dota 2 as one of its proud cash generators. The Arms Deal update offered weapon skin drops that could be traded on the market, and soon opened up user-created content to the masses of precision shooters that called CS:GO home.

The Arms Deal update has had quite the impact on Counter-Strike. Imagine the update is some state-of-the art gunpowder, loaded into a cartridge, and used to fire bullets labelled ‘player count’. That’s pretty much the effect weapon drops have had on Global Offensive, with player counts soaring dramatically since the update landed in August.

In beautiful graphics we can see here the wave-form of player count numbers (no, that’s not player heat rates after discovering weapon drops) between the dates of June and November 2013. The red line is Global Offensive, yellow and red designate Counter-Strike 1.6 and Counter-Strike Source respectively. At the August mark you’ll notice that Global Offensive jumps like a cat booted in the rear, suddenly no longer as popular as its older brothers, but boasting almost twice as much player activity. Numbers go up and down, but Global Offensive remains the go-to game for CS players for the remainder of the year, even hitting an all-time high of 67,049 players in November.

I think what we’re looking at here, ladies and gentlemen, is pretty conclusive proof that the weapon monetisation tactic was a resounding success. The tactical insertion of pretty skins for weapons does, without any uncertainty, send players wild. Perhaps it’s now time to put furry boot drops into Half-Life 2 Deathmatch….