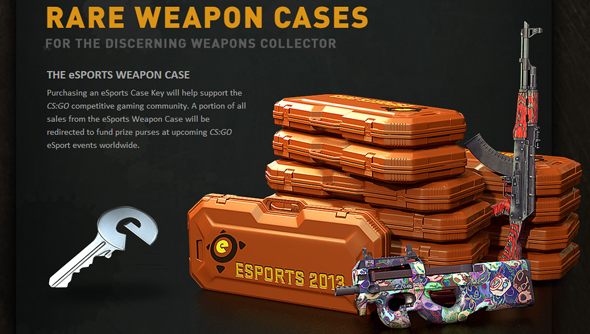 We knew it was on the horizon: Counter-Strike: Global Offensive has been updated with systems to trade weapon skins. You can currently only use the official skins created by Valve but soon you will be able to make and share your own. It will be much like the Steam Workshop support that funds Dota 2 and Team Fortress 2.

Valve have released ten weapon collections. Each is made up of themed skins for each of the game’s guns. The Aztec collection gives all your guns a swampy colouring, for instance. There are also eSport weapon collections. These take a note from Dota 2’s The International Compendium: every sale of an eSports collection adds a little cash to the pot for Counter-Strike pro tournaments. Valve are having the community help fund the sport that grew from the game.

Weapon skins don’t have to be bought. They can be found in timed drops on any VAC secured server.

You can also trade any skin you pick up.

A new item added in this update are StatTrak weapons. These are little add-ons for your guns which track the number of kills you have with that weapon. It clips on under the barrel and can be seen in game.

You can read all about it on the new blog post. Here are the full details: