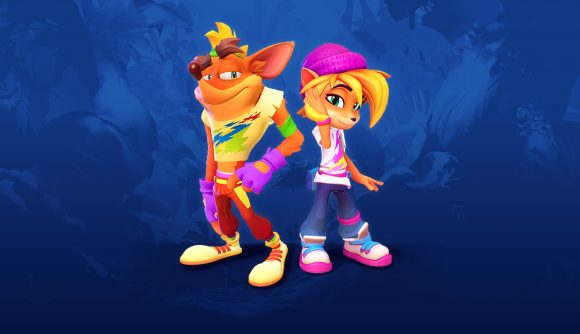 Toys for Bob, the studio behind Spyro Reignited Trilogy and now the latest Crash Bandicoot have a simple message for you: there are no microtransactions in Crash Bandicoot 4. A store listing for the game hinted that it would have “in-game purchases” – and the questionable rollout of real money currency in Crash Team Racing has left fans skittish – but the devs insist there’s no reason to worry.

“We’re seeing confusion about MTX in Crash Bandicoot 4,” Toys for Bob says on Twitter, “and want to be crystal clear: There are NO MICROTRANSACTIONS in Crash 4. As a bonus, the Totally Tubular skins are included in all digital versions of the game.” Those skins offer up retro-style looks for Crash and Coco, and seemed to be hinting that the game would feature purchasable skins.

This statement comes after a number of players noticed that the Crash 4 listing on the Microsoft Store includes the warning that the game “offers in-app purchases”. Unfortunately, that label has come to be a generic catch-all for games which offer any additional content, including DLC – The Witcher 3, for example, has the same warning.

There’s an additional caveat here – the Activision-published Crash Team Racing controversially got in-game purchases a month after launch. In that case, however, the devs did not make an explicit public statement confirming there would be no microtransactions.

We're seeing confusion about #MTX in @CrashBandicoot 4 and want to be 💎 clear: There are NO MICROTRANSACTIONS in #Crash4. As a bonus, the Totally Tubular skins are included in all digital versions of the game.

Crash 4 is coming exclusively to consoles at launch, but when asked about a PC version, Activision told us it’s “evaluating additional platforms”. There are plenty of platform games for you to check out in the meantime.