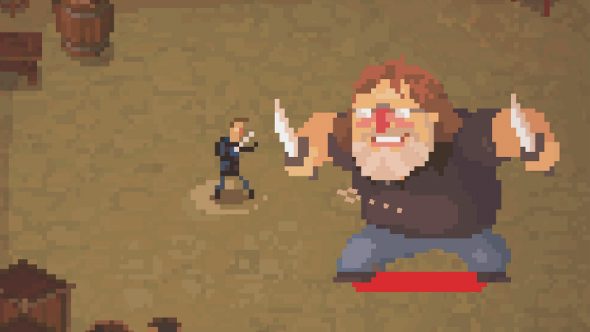 Powerhoof’s pixelated and punishing Crawl is about to destroy friendships when it finally leaves Steam Early Access and releases on April 11.

If you’re looking for a great game to play with friends while waiting for Crawl, check out our list of the best multiplayer games on PC.

The multiplayer dungeon crawler supports up to four players, tasking one with controlling the hero while others embody monsters and traps littered throughout. Everyone will explore randomly generated dungeons earning XP and loot, but three players will actively work to thwart the hero.

Manage to slay the hero, and you’ll take their place. If not, you can just exact your revenge on them by teaming up at the end of each dungeon as the enormous final boss. It’s gonna get bloody.

Playable enemies run the gamut between IRS employees, skeletons, and even Gabe Newell himself. He’s out to hack, slash, and uppercut his way to victory, but that’s nothing new for Gabe. (Watch this space for a mod that replaces the hero avatar with a Uplay icon.)

It’s decidedly gory with some impressive animations, especially when you watch Gabe hopping about and slashing at the air with his impressive set of knives.

Crawl has been cooking in Steam Early Access since August 2014, but it’s finally coming together for real, now. Check out the launch trailer to see it in action.