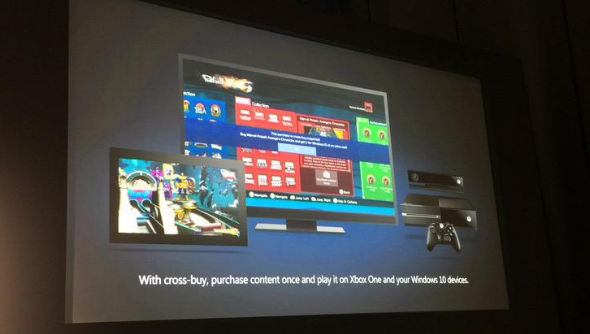 At GDC Phil Spencer, Microsoft’s leader when it comes to all things gaming, announced that a cross-buy system was coming to Microsoft platforms. Developers will be able to make games for both PC and Xbox One, and offer them on a ‘buy once, play on PC or console’ deal.

Cross-buy won’t be mandatory, but any developer who has made a multi-platform game will be able to make use of it. The first game to feature the system will be PinballFX. Buy it on your Windows 10 PC, and it’ll also be in your Xbox One library. The system can be used for DLC, too, so any new tables you buy in PinballFX will be available on your PC and Xbox One copies.

Following PinballFX will be MOBA Gigantic, which not only will be cross-buy enabled for any and all purchases you make in the game, but will also be cross-platform, allowing PC and Xbox players to play together. You’ll have to opt-in on cross-platform play, though. If you don’t want to play with people on another platform, you don’t have to.

“The games you own are the games you own,” said Spencer. “Play them on any device you own.” This mantra comes as part of Windows 10 offering a single, core OS, that will unify all of Microsoft’s hardware platforms. With a single app store accessible by all of Windows’ devices, many boundaries are removed.

The new service will be called “Windows and Xbox Live”, which certainly conveys the merging of PC and console.

A similar system has been in place over in Sony’s corner for a while now, with many Playstation games being able to be purchased once and then played on any of your Playstation consoles. It’s been exceptionally warmly received (especially with games that can be played on both a PS3 and a PS Vita, meaning home or away playing of the same game), and I expect Microsoft’s equivalent will see a similar reception.