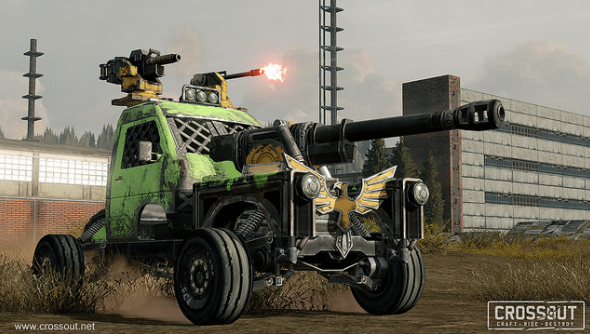 Developer of War Thunder, what we’ve happily called one of the best World War II games on PC, Gaijin Entertainment have decided to bring their exceptional attention to detail to a post-apocalyptic setting for their next MMO, hitting the zeitgeist bang-on as we’re all still on a high from how good Mad Max: Fury Road was.

Taglined “Craft, Ride, Destroy” Crossout is completely concerned with vehicular combat and the support of that by crafting and altering your unique vehicle into the perfect post-apocalyptic survival machine. Still pre-alpha (Crossout will be seeing a beta launch sometime this autumn) Gaijin sadly weren’t able to show us too much of a live combat experience, instead taking us through the construction/customisation options and the ability to test your vehicle creations before you get it out on the fury road.

And Crossout does look like it offers as much customisation as you could ever dream of, with each decision made altering your vehicle’s handling and defense, with a level of granularity you’d expect from a Gran Turismo—it’s not just bolting heavy armour on your vehicle, but adding generators to power certain weapons or the type of wheels you want. Alarm bells might ring, however, when you discover that these parts are earned through play, but can be bought and traded with other players; there was no word on how careful they’ve been to avoid “pay to win” scenarios.

However, while there are no classes as such, Gaijin promise there will be lots of space for different builds to succeed, showing us everything from huge rigs covered in chainsaws and drills to nimble buggies that rely on turrets to get hits on their opponents. Being able to quickly load up the build you’ve been working on and see how it reacts to collision or gunfire was one of the features Gaijin stressed, and it’s clearly key with damage needing to be repaired. And the damage modelling system impressed—panels deform and chip away, and weapons and wheels and the like can fall off entirely. It’s only if your driver bites it—either through a well placed shot or the entire cabin being torched, for example—that you “die.”

Crossout has a lot of promise—and a team that’s experienced with creating a solid MMO combat experience—but our E3 impressions are sadly limited by the inability to get a proper taste of the “main” gameplay. And like many MMOs, Crossout will likely live or die on how well it manages to engage a community, with previous car-combat MMOs rarely surviving very long (NCSoft’s Auto Assault lasted barely a year.) Can Crossout beat the odds? Here’s hoping.