Contrary to popular belief, the world does have an edge. At least, it does in Paradox’s Crusader Kings II. But rather than it being a great abyss where the land and sea gives way to a terrifying void, it’s actually lined with “under construction” signs and bollards. This building site is poised to move substantially further east, pushing mountains out of the ground and hammering away to create the Indian subcontinent.

“300 new provinces,” says studio manager Johan Andersson, and my mind reels. He’s underplaying it, though. When I eventually sat down on an absurdly comfortable sofa in a thankfully air-conditioned hotel room in Miami to see Crusader Kings II: Rajas of India, lead designer Henrik Fåhraeus adds almost a hundred more provinces to the number. Rajas of India is going to be big. Ambitious, too.

Vast: that was my first impression of Rajas. While many of the provinces in India are small, it’s still a significant chunk of real estate, and the rest of the map has been pushed further east as well. Where once the most easterly provinces of Persia were oddly cut off, not reflecting their historical shape or size, now they are fully formed. This isn’t just an Indian expansion.

But with a name like Rajas of India, the focus is certainly clear. The subcontinent plays host to a Mexican standoff, with three religious groups vying for control amid the smaller dynastic squabbles. It’s a relaxed standoff, though, as the religious tension that sees so many games of Crusader Kings II erupt in holy wars is significantly lower in India. That certainly doesn’t mean there isn’t conflict, however, with the Hindus leading the charge as the most aggressive of the three.

Joining the Hindus are the Buddhists, filled with philosophers and learned folk, the practical benefit of which is nice bonuses to their tech. The third member of the standoff, the Jain, are perhaps the most unusual, especially in a game where a war breaking out is as common as cornflakes for breakfast. They are pacifists: stable, but lacking many opportunities for expansion.

The new religions and cultures bring some of the biggest additions to the constantly evolving Crusader King formula, from a caste system to culture-specific events like reincarnation, where a child will develop similar character traits to an ancestor. Hindu characters can also favour specific deities, and their choice of god is made tangible by particular character traits. Changing religion is apparently a doddle. Rulers may switch religion freely at least once in their life, giving players a chance to experience the new religions more easily and explore the mechanical benefits and specific abilities of each faith. Conquerors from other lands, like nearby Persia or even distant Europe, can convert to the Indian faiths as well. But if you were to make your Norwegian king convert to Hinduism, you’d start as an untouchable and not be well-liked. Working up to the warrior caste would be a necessity.

India – its topography, flora and fauna – contains some sizable additions as well. A new terrain type, Jungles, dot the landscape, providing defensive bonuses to the armies camped out in them, and wandering those lush areas and elsewhere are war elephants, Rajas’ most flashy new unit. While the use of these beasts in battle had gone out of style in other parts of the world, Henrik informs me, they continued to be a part of warfare in India up until the 17th Century.

Accompanying the expansion is a patch that offers a lot of the content from Rajas for free. The expanded map is available for everyone, and while only those purchasing Rajas will get to play the new Indian cultures, they will still be present in that region for all players. Several other additions will make the next update sizable even if you don’t splash out. 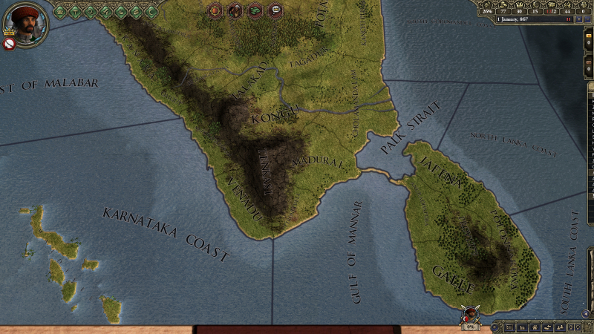 Steam Workshop integration and Steam multiplayer will bring Crusader Kings II in line with Europa Universalis IV. Custom mods will be easier to access and hopefully setting up an online game will involve less faffing around. A borderless window mode is being added to the options too.

One of the most surprising additions is a free mini-expansion. Paradox Development Studio wanted to work on African DLC, but instead they’ve integrated it into the Rajas update. Think of it as a mini-expansion. The Nubian culture has been expanded, and that entire region has been given more depth and character. Decadence, the mechanic introduced in Sword of Islam for Muslim rulers, has also been tweaked, making taking a trip to North Africa well worth your time.

Rajas of India is set to launch in March, and I’m already planning my next outing. Ever since The Old Gods, I’ve been experimenting with the Vikings. In Sons of Abraham I made a Jewish-Viking state, and this time around I’m contemplating Viking India. I spent an entire night planning my trip down from Norway, through the Mediterranean – picking off ports – carving off a slice of Egypt, until I reach the Indian Ocean. Hindu Vikings just sounds right, somehow.