Last week, Paradox announced its 14th expansion for Crusader Kings 2, the publisher’s medieval kingdoms simulator. Jade Dragon sees China added to the political melting pot, a nation that has always been hinted at – simply by being present on the far east of the world map – but never actually present within the game.

There’s no word on how Jade Dragon will impact Hillary Clinton’s medieval rule.

China won’t play like any other nation already in Crusader Kings 2, so what follows is a rundown of the major changes it brings to the game – get yourself ready.

In an odd twist, despite being the focus of the new expansion, China won’t actually appear on the Crusader Kings 2 map. Instead, it will be an off-map power that can be traded with, negotiated with, and fought. The reason for this is simple: Crusader Kings 2 is now so large and complex a game, Paradox can’t add a new region to the game without making everything slow down horribly. The team learned this the hard way, game director Henrik Fåhraeus tells us: “We added India as part of a free patch and that slowed down the game quite a bit. People weren’t too happy. We’ve now got the game back up to speed with optimisations, but to add one more chunk of the map would slow down the game significantly, so we decided on a compromise – add China without really adding China.”

Being friends with China can bring many gifts 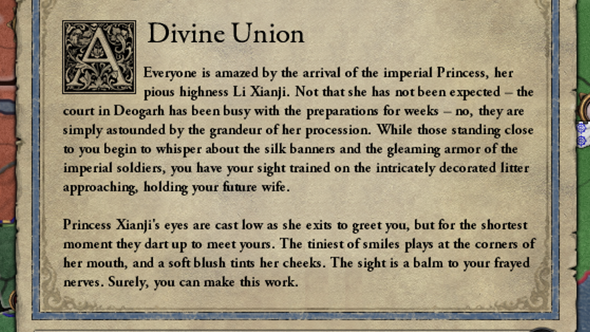 While off-map, China can impact your kingdom significantly by expanding your court. If you can get into China’s good graces, there there are a number of boons you can request off your Eastern ally.

A Chinese court physician will keep your family healthy – Chinese medicine was far beyond what the West had to offer at the time; a siege engineer will make your armies more efficient in breaking through castle defences; strategists, scholar bureaucrats, and master engineers all buff your ability to rule. It’s not just people either, as you can get favoured status on the Silk Road – which increases your trade income – ask China to invade one of your enemies, or seek out an Imperial marriage (which also nets you a regiment of royal guard).

To get in with the Chinese, you can offer them gold, or more effectively a eunuch or a concubine. Though that does mean giving up a close, marriageable family member. 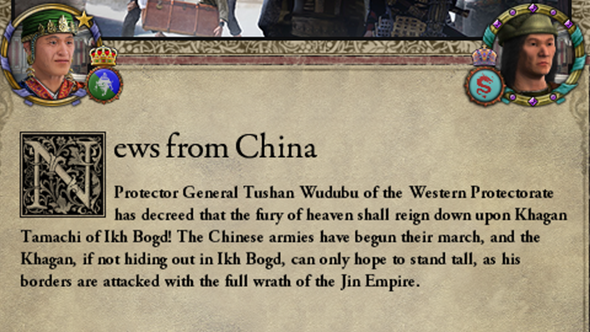 If you get on the wrong side of China it can mess you up, even if it’s not visible on the map. The country has control of the Protectorate to Pacify the West, an army that it can use to invade nations near its borders. Much like the Mongol invasions, these large armies will come sweeping through the lands, cutting down anyone who gets in their way.

Luckily, such a twist of fate is rare. Usually, China will be isolationist or open. You only need to worry when they change their mentality to expansionist.

As part of the expansion and the free patch that will launch alongside it, Crusader Kings 2 is getting a new set of casus belli (motives to start a war), which will please the more military-minded players.

On the smaller scale, if you’re playing as a count, you now have a claim to all the other territories under your duchy’s control. Similarly, emperors and kings now have claims on all the duchies within their realm.

A more exciting casus belli is the new liberate religion motive. If your faction shares a major religion with a minority group in another country you can go to war to install someone of that minority faction into power. You won’t then control that territory but you will have a friend in that corner of the world.

You can now wage an unjust war, too. It carries heavy penalties, but if you have the itch for invasion then you can now kick one off.

Finally, and this is a casus belli included in the free patch, you can start a war to free hostages. So, if you find your shores often raided by vikings and your daughter is taken as a concubine, then you can send an army after her – like a medieval version of the Trojan War.

It’s not the last expansion

Jade Dragon is Crusader Kings 2’s 14th expansion but the team aren’t done yet. “This is not the last expansion,” Fåhraeus says. “I have some ideas [and] we have a list of stuff we want to do.”

However, he also says, “Although the game is doing better than ever, we’re probably going to look at ending it. We’re looking at doing more stuff but I think it’s fair to say we’re getting there.”

Though, now the game is at the point where Paradox can’t add new areas to the game or layer in more complex systems without slowing the game down, the team may be limited in what they can expand.