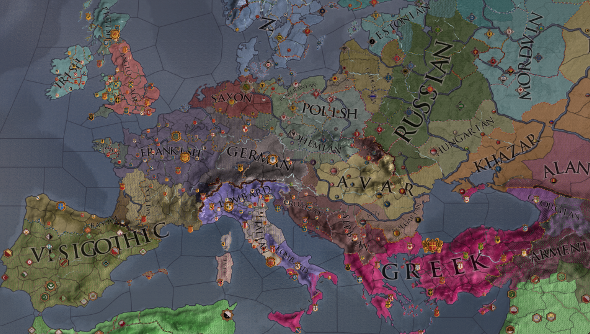 When Crusader Kings II launched in early 2012, I’d be surprised if anyone anticipated just how damn popular it would become. Paradox’s grand strategy titles had a strong following, but were niche, and the original Crusader Kings – despite being pretty damn unique – didn’t make much of a splash.

Today, the Swedish publisher has revealed just how popular it’s become. Crusader Kings II has been purchased over a million times. That’s a lot of people murdering their spouses and conquering the medieval world.

“Whenever we discuss the sort of games we like to make, and the sort of fans we make them for, Crusader Kings II is one of the titles we point to as a shining example,” said Fredrik Wester, Paradox Interactive’s CEO.

Since its launch, Paradox has supported the game with a large number of DLC and expansions – another one, Charlemagne, is due out soon – which have sold over 7 million units. Given that each expansion also comes with a free update, so one doesn’t need to buy an expansion to get a lot of the new content, that’s an impressive number.

Crusader Kings II is, according to Paradox, played by around 12,500 players every day and 100,000 players a month. And they play it a lot. The average playtime is a bit over a whopping 99 hours.