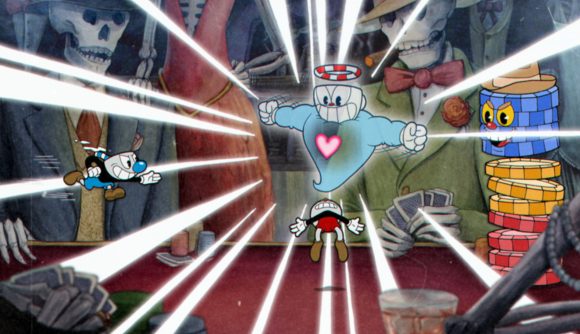 Infamously tricky run-and-gunner Cuphead is just about to get ported again – but this time to something a bit different: Teslas. You know, the cars. The car manufacturer’s CEO Elon Musk has just revealed that the game will be heading to the dashboard screens of certain Tesla models, expected quite soon.

This follows Musk’s recent announcement on Twitter that there would be “lots more games coming once we finish porting [Cuphead’s engine] Unity!”. He also confirmed on Twitter at the time that the company was porting in the Unreal engine, though it’s not clear which titles will wing their way to the cars just yet. Just imagine, though, launching into a few rest-stop rounds of Mortal Kombat 11 to Flick Kick those really long journeys into being a lot less dull.

Musk acknowledged during the podcast that storage could be an obstacle to overcome, so users might have to delete a game to make way for another. Cuphead, for example, will only feature the Inkwell Isle One stage for storage reasons. So, perhaps we won’t see a Sub Zero unleashing any Ice-Cutioners in Teslas just yet.

Related: Check out the best retro games on PC

According to IGN, users will also have to use a USB wired controller to play Cuphead, rather than the car’s touchscreen controls, for precision reasons. The game will also only be available to play when the car is parked.

Cuphead is due to hit Teslas later in summer 2019.