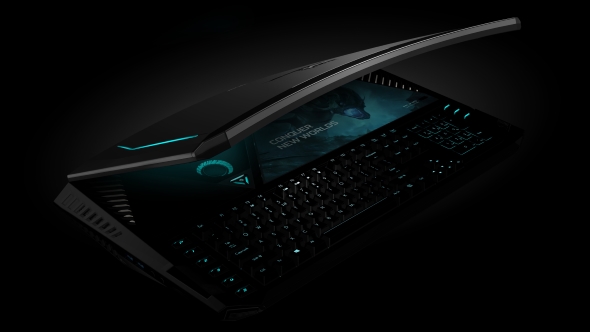 Panel makers AUO have created the daddy of gaming laptop screens, with an ultra-wide curved 21-inch display that you can finally take on the move with you. Brace yourself for a curvy laptop gold rush…

Is your current gaming display looking a bit shabby? Find the best new pixel-pusher for you by checking out our guide to the best gaming monitors around today.

The company are set to show off a new panel at SID’s Display Week 2017which jams a 21-inch LCD laptop screen into an attractive curved package. That could mean curvy ultrawide gaming laptops will actually become a thing. 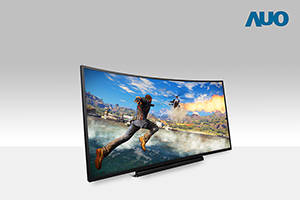 You might be wondering where you’ve seen a curved laptop screen before. Acer have already produced an ultra-wide curved laptop, the Predator 21 X.

Despite weighing more than two newborn babies strapped together, the 21 X sports a 21-inch curved screen that looks impressive perched atop its intimidating design. The specs on the AUO screen are identical to those on the Predator 21 X spec sheet, so it’s not a stretch to think it’s wearing their panel.

Attracting attention at Display Week will be a tough ask for some companies, especially knowing sci-fi tech like Samsung’s stretchable screen will be there. That’s right, we said stretchable. Samsung have been prototyping an OLED display that can curve, bend or roll and revert back to its original shape after being dented. That’ll no doubt be a huge talking point at this year’s conference, but AUO’s 21-inch curved beauty will likely still pique some interest.

Especially seeing as curved laptop screens are still very much an emerging technology. While curved desktop displays are nothing new, attaching these screens to laptops will be combining luxury and semi-portability in a pretty compelling package.

But is this AUO 21-incher perfect? No – that ultra wide 2560×1080 display will be glorious in-game, but could make any other tasks like looking at your laptop through a letterbox. And, unlike the smaller 4K 15.6-inch screen they’re showing off alongside it it doesn’t look like it’ll have an ultra-thin 1.5mm border. But in all honesty, this is still a damn good start.

With many gaming rigs still not capable of driving a 4K panel at any decent performance level, a 2560×1080 display won’t be such a drain, and provided the price of asking is sensible enough we could see displays like this catching on at quite some speed. Given AUO are showing the panel off outside of the 21 X it may be that other manufacturers are already on board, or the company are just trying to get someone else interested.

What do you reckon? Are curved laptop displays the way of the future or will they end up on the gaming fad pile with the Guitar Hero controllers? Let us know in the comments.