I’m leaving the Afterlife, a mortuary turned bar that caters to hardened mercs and guns for hire. Passing a couple of augmented dancers suspended in tanks of water, I hear a gangster pleading with a ripperdoc to save his dying buddy. He’s not coming. Outside on the streets, a bunch of garish advertisements bombard my artificial retinas: Mr Whitey’s legal highs, a multi-part TV series called Watson Whore, and a food company trying to sell patrons an “explosion of taste”. A disgruntled man stands next to a cardboard sign, reading, “Got no home, sick kid, and cheating wife. Need booze money ASAP”. Off in the distance, a series of corporate buildings dominate the skyline, a constant reminder of who runs this benighted town.

Amidst the bustling marketplace of Little China, Garry the Prophet harps on about the techno-necromancers of Alpha Centauri and the end of times. Children weave through the crowds, their optics glowing red.

Another visual treat catches my eye. An underpass filled with a mishmash of pipework, food stalls, and blooming trees. After slipping past a group of Tyger Claw thugs, the phone rings. It’s a fixer called Reggie Jones. Apparently I’m near the Kashuu Hanten Bar, where a gang has stashed a client’s optical implant. In what can only be described as a serious error of judgement, I walk through the front door and head towards the back. The whole place explodes in a cacophony of gunfire. I move from room to room, dispatching waves of armed Tygers. After grabbing the implant from a storage room, I sneak out via a back alley and scurry off into the night.

It isn’t difficult to find something to do in Night City, provided you make the effort to ditch your car every now and again. Just pick any direction and walk for a couple of minutes. Night City is a sensory overload, dripping with atmosphere and detail. Something as simple as a faulty AC unit throwing off a shower of sparks can set the mood perfectly – down on the city streets everything is jury-rigged or barely working. These touches are everywhere, but they’re packed into alleyways and bars. 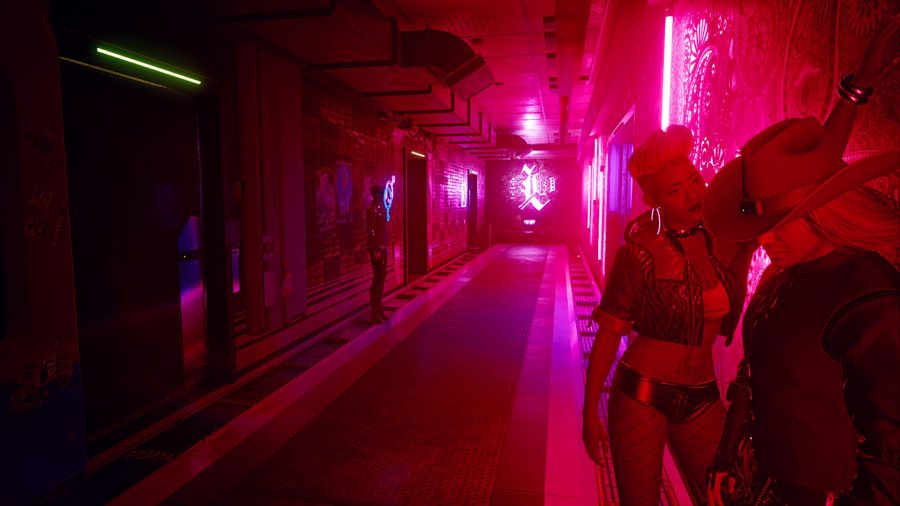 The first time I saw Lizzie’s Bar, I just stared at the place for a few minutes. The establishment’s Moxy logo – an axe-wielding dancer with a skull for a face – casts a satisfying electric pink glow onto the smoke-filled rooftops. Just down the road in Corpo Plaza you’ll find a pretty jarring contrast in the Arasaka headquarters building, a jet black monolith with two holographic koi encircling its central courtyard. Outside of Night City you’ll find The Badlands, which has its own dystopian charm, peppered with barely moving rusted turbines, abandoned oil fields, and overflowing landfills that form literal mountains of garbage.

The seedy metropolis is a testament to the CD Projekt Red’s deliberate approach to world building. Every neon-lit street feels handcrafted, making the drab street corners of most open-world games feel rather ‘cookie-cutter’. Indeed, 2077 fails most when trying to emulate the mechanics of the studio’s previous RPG games, with surprisingly little consequence to make the many choices you make feel important.

Cyberpunk is best played without looking at the map screen’s dizzying array of quest markers, as the game’s cumbersome menus only serve to take you out of Night City. Even Dead Space – a game released in 2008 – had a more elegant solution to this problem thanks to Isaac Clarke’s holographic map offering easy navigation without pulling you into a new window (ditto Far Cry 2’s handheld map). 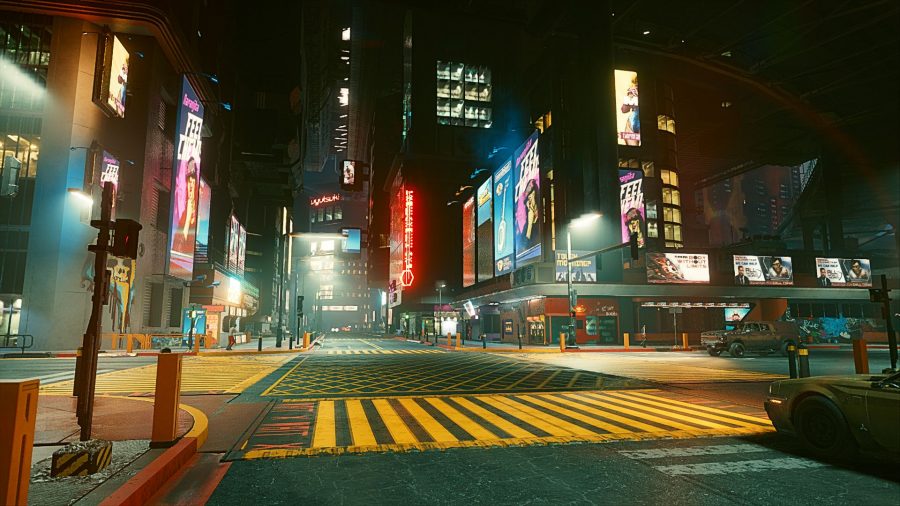 The first time I saw Lizzie’s Bar, I just stared at the place

Cyberpunk suffers from datapad-itis, too. They’re everywhere, even in locations that don’t call for it, even repeated datapads so you’ll often end up reading the same story several times over. I’ll be sneaking through a den of corporate sharks, only to be confronted with several Doom 3-style PDAs that take longer to read through than the subsequent shootout. While interesting and well-written, these chunks of lore interrupt the action and will often pull you out of tense moments. So much work has been put into the environments to ensure that every side street, billboard, and nightclub tells a story, and it’s a bit of a shame that this excellent world building is often overshadowed by archaic text logs.

CD Projekt Red has a talent for creating spaces that feel believable and lived in. Night City’s tumultuous history seeps from its every concrete pore, its foundations drenched in the blood of its unlucky residents. The city’s past will eventually reveal itself to those who are willing to put in the time, from details of the Corporate Wars to the ongoing cyberpsychosis epidemic. Players who decide to push through 2077’s obvious technical failings (or wait for the patches) will discover that Night City is the true star of the show. Which is a shame, because it’s all too easy to miss it as you speed down the highways in V’s Quadra sports car.