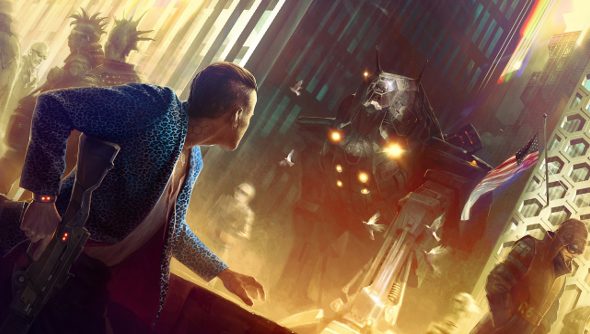 It has been over two years since CD Projekt Red announced Cyberpunk 2077, based on the tabletop RPG. A flashy trailer appeared, and then things went quiet. They never stopped being quiet. And with The Witcher 3 coming out in May, that’s all the developer wants to talk about.

“The first rule of Cyberpunk 2077 is that we don’t talk about Cyberpunk 2077,” CD Projekt Red’s head of marketing and communications told Gamespot.

“On a more serious note, in short, communication-wise, we are now focusing entirely on The Witcher: Wild Hunt. Everyone is working crazy hard to give gamers around the world an RPG to remember. Worry not, Cyberpunk 2077 is OK, its time will come.”

Cyberpunk 2077 has a separate development team, so it hasn’t been affected by The Witcher 3’s delays, though the two games do share some team members.

CD Projekt Red’s silence on Cyberpunk 2077 does make the game’s announcement back in 2012 seem a bit like a false start. It’s undoubtedly tricky to strike a balance when making a game announcement, ensuring that it’s early enough to drum up interest, but not so far from release that people will forget all about it.

The Witcher 3 is due out this May, and hopefully once Geralt’s adventure is out in the wild, CD Projekt Red will start talking about Cyberpunk again.