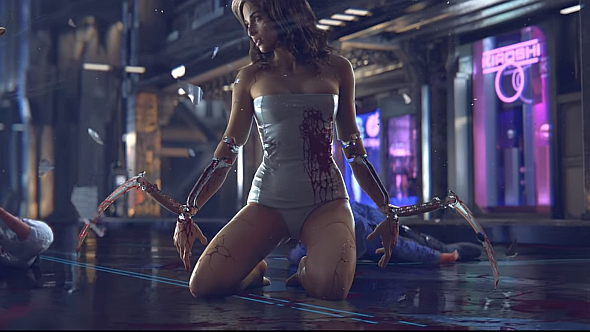 “What you didn’t see in the demo is that for melee we also have a katana, which is super cool,” Cyberpunk 2077’s cinematic animation lead Maciej Pietras tells us at E3.

Much has been made of the switch from third-person view in The Witcher III to first-person in Cyberpunk. Given that we’ll (mainly) be shooting guns in a vertiginous city as opposed to twirling swords in a relatively flat countryside, it seems a sensible choice to us, but swords have not been entirely forgotten. There will be melee combat in the game with appropriate weapons.

Not only does that mean katanas, but also mantis blades. These are the blades that you may remember from the augmented woman in Cyberpunk’s very first teaser – the ones that unfold from her wrist and resemble a praying mantis’ forelegs. They are a “Cyberpunk 2020 canon weapon,” Pietras explains, and will help with climbing and traversal, as well as combat.

Which of these exciting upcoming PC games is a day-one purchase (reviews permitting, naturally) for you?

“We wanted to create this real visceral feeling,” Pietras says. “When you’re approaching each combat situation, we want players to have a variety of tools in their toolset. When you’re using long-range weapons, we want them to be varied, right? We have tech, smart, and power weapons. Each of them behaving differently and each of them has different uses in different combat situations.”

We don’t know the Cyberpunk 2077 release date yet, but after E3, we know a hell of a lot more than we used to. Hit that link for the full lowdown.