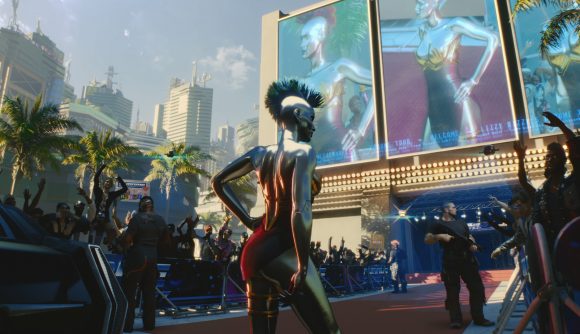 CD Projekt Red’s UI director Alvin Liu has said that regardless of what hardware Cyberpunk 2077 will be played on, graphically, it will look amazing regardless of specs.

In an interview with Wccftech (via Tech Radar) Liu was asked how the team was rising to the challenge of optimising Cyberpunk 2077 for lower-end hardware and consoles. In response, Liu says that the studio has a “custom engine, the RED Engine” and it would help Cyberpunk maintain a high level of detail even on low-end PCs.

Liu continues to say, “We’re targeting consoles as first class platforms and it looks amazing there. So obviously, if you spent, you know, $2,000 building your PC rig, it’s going to look better on that. But the graphics are quite amazing for what you’re going to get from Cyberpunk 2077 on consoles and low-end PCs.”

The RED engine that Liu refers to is the same one that the studio used for The Witcher 3’s stunning landscapes. Just thinking about the glistening, icy peaks of Skellige gives me chills.

Liu doesn’t go into more detail, and Wccftech will be releasing the whole interview soon, so it’s difficult to understand how the team will achieve getting the same graphics quality on both console and PC.

At this year’s E3, we attended Cyberpunk 2077’s Nvidia RTX demo to have a peek at what the game would look like with real-time ray tracing and we were not disappointed. Night City’s neon lights, polished floors, and illuminated street signs all brought the game to life, adding an extra layer of visual extravagance to what is already an extremely handsome game.

Read more: Check out all the latest details about Cyberpunk 2077

Cyberpunk 2077 is looking to be a treat for the eyes, the glossy, futuristic, and entirely handcrafted sprawl of Night City is brimming with potential. As Liu says, regardless of what platform you play Projeckt Red’s neo-dystopian RPG on, it should dazzle you. Just don’t play it on a potato.