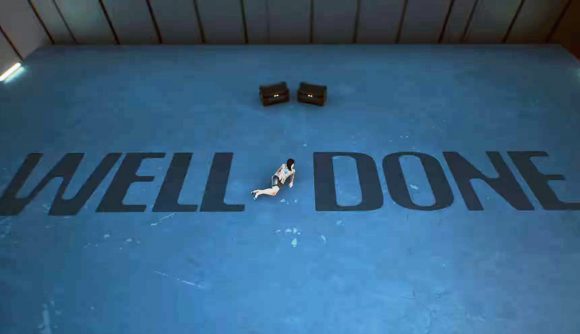 A previously undiscovered Cyberpunk 2077 Easter egg has been revealed that congratulates players for finding it. Players using glitches or parkour skills have found this secret location on the edge of the city, complete with a big “well done” message printed on it.

Earlier this year we decried the currently revealed Easter eggs in Cyberpunk 2077 as marketing rather than fun secrets, such as the Portal mission, Hideo Kojima, and the semi-hidden Batmobile and Akira Bike vehicles. We specifically asked where the equivalent to GTA San Andreas’ classic “there are no easter eggs up here, go away” sign was – it turns out we might not have been looking hard enough.

As initially spotted by Feeltherush2132 on Reddit, the secret location can be found in the Santo Domingo area in the Arasaka Industrial Park. There’s a big building here with ‘Arasaka’ written on the side, next to a construction site. Feeltherush2132 used the ‘flying katana glitch’ to ascend this building, and near the very top, there’s a large ledge with two chests – which spawns a giant “well done” message on the floor when the player gets close.

It’s actually possible to access this Easter egg by using regular parkour skills and no glitches, as YouTuber DefaultDanielS illustrates in the video below – although players will still need to have upgraded their platforming skills to make all the jumps. 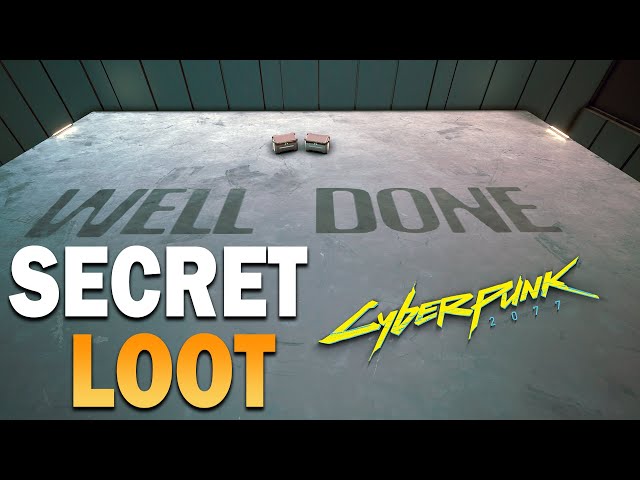 The level designer who put this secret in actually came forward on Twitter after it was found – acting lead quest designer Philipp Weber of CD Projekt RED, who actually hid a similar Easter egg in The Witcher 3. “It’s one of my main rules,” Weber explains, “that if I get a bug about players getting somewhere they shouldn’t (and it takes some climbing skill to pull it off), I leave a little reward for them.”

Yes, coincidentally that was also me! 😄
Got the bug that some players may ride an AV in my quest up to the roof. It would have been easy to just prevent it, but it's always nicer to make it 'official' and say "Good job!" when people are creative like that, so I added the reward! https://t.co/FWzNCtBmQQ

It seems there’s more to be discovered in Cyberpunk 2077 than most people thought – there’s not just awesome mods to play with in the game, after all.