There’s more than a little Mad Max in Warhammer 40,000. In fact, scratch that: along with the comics of 2000AD and early Dungeons & Dragons, mad old Mel makes up the essential DNA of the quintessential grimdark future.

Tickled by turn-based tactics? These are the best strategy games on PC.

It comes to the fore in the fanatical zeal of the Imperium priesthood, and the bug-eyed speed freakery of the trukk-riding ork boyz – only a pigment change and a funky spelling away from the war boys of Fury Road. But the influence of George Miller on Games Workshop has never shone through quite so clearly, like headlamps in the dust, as in Dark Future.

Dark Future drew on the marvellous design instincts of Richard Halliwell, then just a year away from publishing Space Hulk and introducing the word “overwatch” to the sci-fi gaming lexicon.

Since then, the setting has lived on in Kim Newman novels about a desert America wracked by environmental catastrophe, where the 0.1% live in gated, corporate communities and the rest dwell in decaying shanty towns. But it’s getting on a bit; the dark future in question dared to imagine a far-flung 1995. Any modern update constitutes a hefty rewrite of a game now out of print and half-forgotten.

“I remember seeing an advert for it in White Dwarf back in ‘88 and thinking, ‘That sounds cool,’” recalls Auroch Digital’s Tomas Rawlings. “It always sat with me. Within Games Workshop’s canon of stuff it’s not as well known as Warhammer is, but as a fan and as a game designer, I’m more driven by what I could see us doing something good with.”

After Auroch wrapped up work on two faithful Chainsaw Warrior adaptations, they returned to Games Workshop with a pitch.

“What they were trying to do with the original board game was balance some semblance of a physics simulation – momentum, movement, speed and crashing – with a gameplay system that’s fluid and enjoyable,” explains Rawlings.

Working in Unreal Engine 4, Auroch have made that simulation far more powerful and handed it off to the computer – leaving the player to handle the business of sticking it to rolling gangcult convoys with front-mounted heavy machine guns. 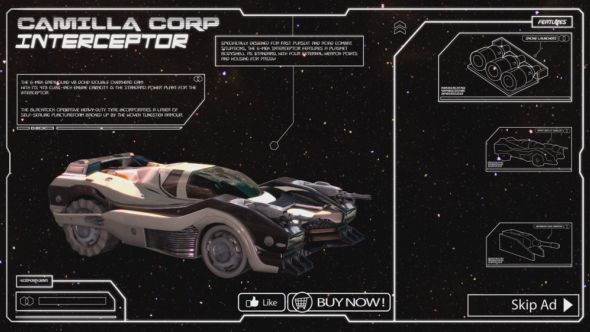 At any point during a car chase you can swap to command mode, freezing the action to deliver orders to move, shoot, ram or switch lanes. It’s high-speed tactics, in which you might time the collision of three cars to create a pincer movement of mangled steel, or swerve a vehicle to avoid a destroyed enemy – now a hunk of flaming debris hurtling across the highway.

“What we’ve created is this weird but very satisfying mix of a real-time system that you interact with as if it’s a turn-based game,” says Rawlings. “It’s working really, really well.”

In doing so, Auroch have preserved the spirit and some of the stats of Dark Future: “This idea that you are in charge of this bunch of highway warriors who are as dangerous as the people they’re trying to catch.”

Your warriors are Sanctioned Ops – bounty hunters given free rein to hunt down ne’er-do-wells in the largely lawless desert. As the head of their agency, you’ll picking bounties large enough to allow you to bolt bigger guns to your cars between battles, or perhaps a new set of bionic eyes for a driver with iffy aim. 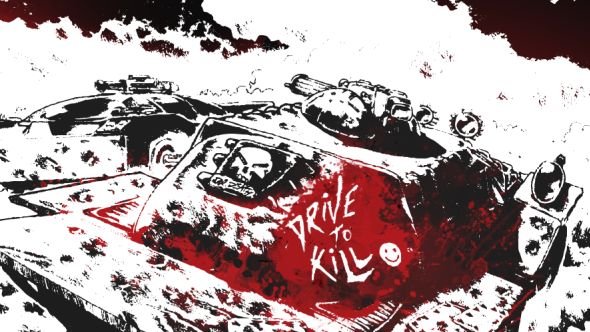 On those bionic eyes: Blood Red States is supported by the Wellcome Trust, the biomedical research charity with a long (if unlikely) history in games development. And that partnership has inspired some of Auroch’s updates to Dark Future lore. In their take on the universe, the human genome was patented – meaning anybody can get wonderful upgrades to their body so long as they can pay and keep paying. Similarly, the bizarre and violent behaviour of the gangcults is explained by a real-life microscopic organism which eats away at the human brain – helpfully suggested by the Trust’s consultant scientists.

For everything Auroch have revamped for 2016, however, there’s a lot of Dark Future that’s proved horribly prescient. Rawlings has often found himself thinking back to Games Workshop’s original strapline: ‘Too wild to be true and too close for comfort’.

“It’s the idea of celebrities becoming significant [politicians] and the presidency and the government becoming a sideshow,” he says. “It’s the idea of reality TV being on steroids with brutal gladiatorial media. It’s where the functions of civic society have been hollowed out by corruption, money and influence to the point where they don’t function for the ordinary person. When you read this now there is a lot there that resonates with what’s been and what is happening.”

In this sponsored series, we’re looking at how game developers are taking advantage of Unreal Engine 4 to create a new generation of PC games. With thanks to Epic Games and Auroch Digital.