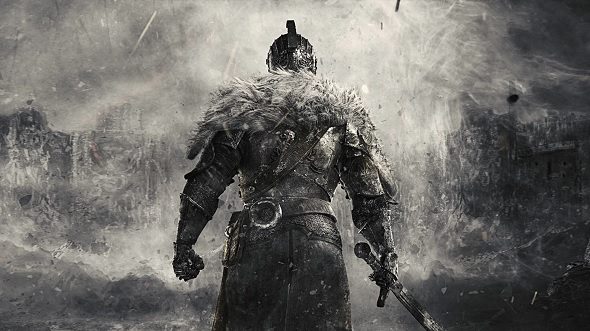 I’m giving myself a pep talk. It’s 2AM, and I’m alone in my study building up my confidence. “It’s only three giant, metal monsters, Fraser. You’ve killed far more impressive bosses. You’ve just got to stop overthinking it, keep on your toes, and for the love of god, stop trying to sneak in more attacks.” In five minutes, I’ll be dead again.

Dark Souls II is an infuriating, sometimes cruel RPG and has almost certainly contributed to my dwindling sanity. And it’s utterly brilliant. It is a game of frequent deaths and countless victories snatched from the greedy jaws of defeat. Sometimes, usually when “You Died” has been burned into my retinas, I hate it. I rail against the injustice of my untimely demise. But I’ll still be playing it hours later. Transfixed.

Does Dark Souls 2 belong with the best RPGs on PC?

The kingdom of Drangleic is cursed. It’s filled to the borders with soul-hungry undead, gargantuan monsters and corrupted champions. And into it walks another hopeless, lost hero. Absent their memories, their humanity slowly being eaten away, they are given one task: collect the souls of Drangleic’s greatest entities and confront the old king. Sounds like a doddle.

Fears over From Software chiseling away at the challenge to create a Dark Souls II that is easier for newcomers can be forgotten. New players won’t be utterly lost, but the third installment in the franchise is every bit as devious and savage as its forebearers. Death can come from anywhere: an ambush from two sides, a change in a bosses attack pattern, a dark room with a hole in the centre. 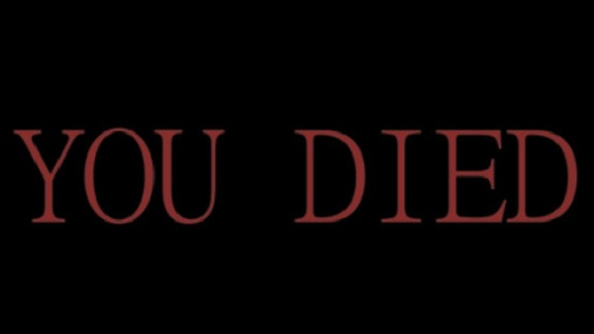 But Dark Souls II does tread a slightly different path from the earlier games, one where systems are clearer and quality of life improvements make the journey smoother. While Dark Souls did eventually allow players to quickly travel between select bonfires – the game’s sanctuaries – the sequel opens this up to all bonfires. If one has been lit, it can be immediately accessed via any other bonfires.

From Majula, the convenient hub town – populated with an increasing number of foggy-minded merchants discovered throughout Drangleic – paths spread out like spokes on a wheel. Each spoke may contain several areas, and without fast travel, getting to them requires traversing the previous regions. If death doesn’t rear it’s ugly head first.

There’s not the interconnectedness of the last game, but in its place is a sprawling world of daunting size. Huge open spaces filled with blood-thirsty enemies are spread across Drangleic, punctuated with narrow corridors hiding ambushes and treasure. Exploring the kingdom and finding hidden paths and secrets rooms is paramount, and rewarding. 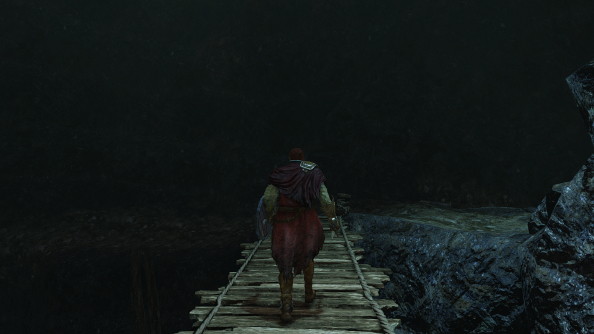 Dark Souls II’s dungeons run the gamut from fantastical ruined temple complexes jutting out of the ocean to shady pirate dens hidden away in dark caverns. Tourism might not be Drangleic’s main export, but there sure are a lot of beautifully designed places to visit.

They spread out both vertically and horizontally, tasking players with long climbs and journeys far from the safety of the bonfires. They are mazes where forks in the road force decisions and there’s always the nagging doubt, the moments where you think “I should turn back”. But you push forward anyway, murdering the area’s inhabitants.

Said inhabitants won’t make murdering them easy, of course. A few hits from even a fairly mundane foe can spell death, sending the hero back to the last bonfire, absent souls and a portion of humanity. And with that it’s back to the trek through the ocean of respawned monsters, but with less health and thus heightened danger.

But rarely does an enemy seem cheap. They all have weaknesses, and it’s a matter of studying them, looking for tells and experimenting with different attacks. A dynamic approach is necessary. Lacing a weapon with magical effects might make one battle easier, while another will require fast footwork and lots of dodging. Each battle becomes a puzzle, the solution to which leads to a satisfying victory in combat and perhaps the reward of more power. 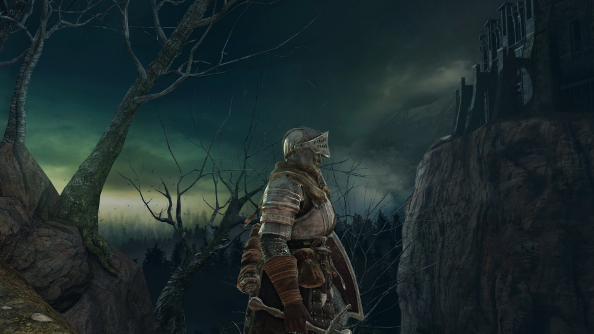 After enough deaths, monsters will simply pack it in and no longer respawn. No doubt sick of dying so many times, they’ve quit. Ostensibly this takes the challenge down a notch, because areas start to become less populated after frequent visits. However, by removing constant grinding from the equation the equilibrium is restored. No longer can heroes kill the same enemies over and over again to get more souls to level up with greater speed or spend at merchants.

None of the minor foes hold a candle to Dark Souls II’s bosses. Towering giants and indescribable horrors bar players’ progress. The range of them necessitates a varied inventory, filled with consumables that offer resistances and buffs, and even multiple armour sets. I found myself switching between medium and heavy armour, favouring the former when blocking with a shield was less effective than dodging.

The game builds up to these battles by preparing players throughout the dungeon. A boss that favour poison attacks or is surrounded by poisonous environmental hazards can be expected to be found at the end of a dungeon that is likewise toxic. Each journey to the mist-shrouded doors that hide the game’s bosses is a lesson, teaching the skills or awareness required to cut a boss down. The confrontations still have the power to surprise, though and it only takes one tiny slip up to get sent back to the bonfire a corpse. 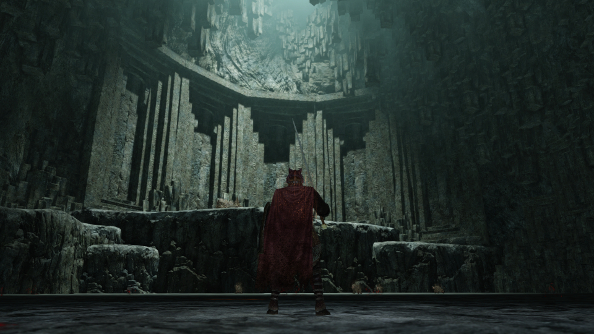 Perseverance is key, throughout Dark Souls II. The game demands that players reassess what death means. When we describe games like this as punishing, and I’m sure I’ve already done it in this review, we can miss some of the point. Death here isn’t a punishment. It’s an expectation. It’s a second attempt, a chance to learn more about an enemy and a chance to get better.

And this makes the rewards so much more compelling. There are the obvious things: powerful weapons and armour. But most bosses and foes don’t drop the best equipment in the game; that’s reserved for explorers and those who go off the beaten track to discover secret areas or fulfill hidden objectives. They do drop souls, though. Souls act as currency, both for purchasing items from merchants, upgrading equipment and leveling up.

So victory brings with it tangible rewards like more power and potentially stronger gear, but there’s an emotional component too. Downing a particularly horrific enemy after countless attempts and so many close calls is like an endorphin explosion for an exhausted brain. 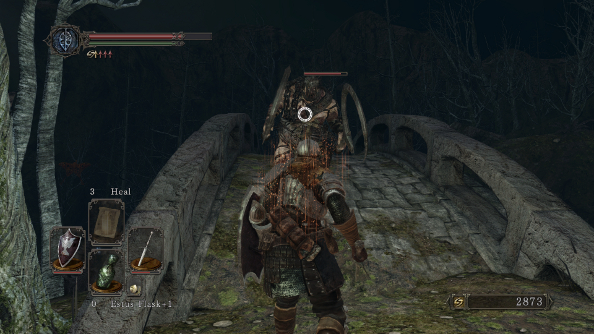 Craving the rush of victory is a great motivator for pushing forward, through the miserable purgatory of Drangleic. But there’s also the story of this fallen kingdom, told subtly through vague dialogue, item descriptions and the environment itself. Dark Souls II lacks much exposition, instead revealing the history of the land organically. It can be completely ignored, or it can be diligently investigated by paying attention to load screens, weapons and arms, and the half recollected memories of lost souls.

There are few missteps in Dark Souls II’s exceptional design, but they exist. Most notably is the absence of purpose given to torches. They can be found all over Drangleic and lit in the life-saving bonfires, but they rarely see any use. Many of the darkest areas can be lit up by other means that don’t require giving up one’s shield arm. And, in fact, most of the game has an abundance of light. It’s a grim game, sure, but the regions are rather bright even if they remain a bit oppressive.

The stat heavy nature of the game also continues to obfuscate. It’s unusual in such a skill-based enterprise that From Software continues to cram in as many stats and resistances as it does. The character sheet is more like a tome. And Dark Souls II adds two more stats into the main list. However, it’s clear how the major stats affect all other aspects of a build, even if it’s not clear how that will translate in battle. Upon leveling up – which can only be done by visiting the enigmatic Emerald Herald in Majula – one can see exactly which numbers are changed by increasing specific stats like vitality or dexterity. 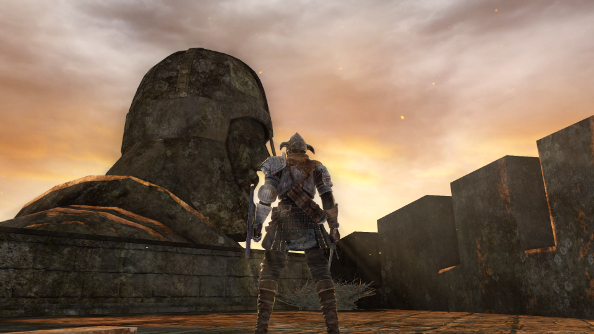 The pay-off for putting up with this wall of confusing digits is flexibility. Heavily armoured warriors can set zombies on fire like pyromaniac tanks, holy clerics can dash around the battlefield with a sword in each hand, ducking and weaving as they swipe at beasties – the system inspires experimentation. At first it’s extremely intimidating, having so much freedom. But items and conflict offer context. One might increase their dexterity so they can wield the new sword they just uncovered or invest in faith because they keep running low on healing supplies.

The freedom offered by the class system echoes throughout the game. Everywhere there are options. Progress doesn’t stop just because a boss refuses to just give up and die. There are other areas to explore, other bosses to fight. Buggering off and coming back hours later is a valid strategy. So there’s no dragging players around; they can go where they want, when they want. And this is made considerably easier thanks to the fast travel bonfires.

Tackling things alone is also just an option. Players from other worlds can be drafted in, able to offer assistance and a sword arm. But it’s a give and take relationship. Before summoning other players, assistance must be given to them first. But instead of making it feel like one is paying their dues, it’s more like a practice run. Helping another player defeat a boss can reveal the creature’s weaknesses, making the second attempt a little simpler.

The multiplayer element is a double-edged sword. Friendly players aren’t the only ones able to cross over into other worlds. Phantom invaders can leap into other players’ games and callously murder them. But there are covenants, online guilds, that can provide some defense against such attacks. Other covenants, though, encourage invasions and reward murderous players. 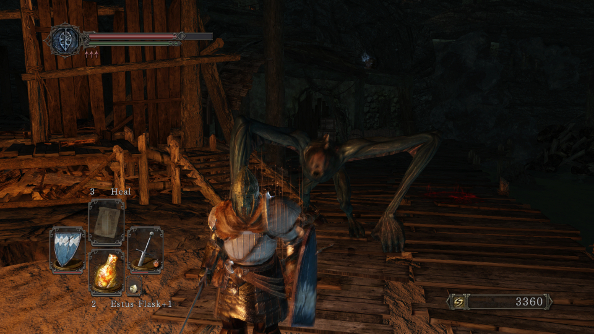 Dark Souls II welcomes veterans and new players with open arms, and then stabs them repeatedly. For every user-friendly addition, there are sneaky tweaks like a parry system that requires more precision or dodge rolls with less invulnerability frames. The brutality has only increased, but it’s elevated by modern philosophy of convenience and player choice. It’s a game where you’ll strive to be better, no matter how many times you end up in an early grave.

And it’s a solid PC port. The framerate and resolution problems that plagued Prepare to Die Edition are not found here, and no longer does the compelling art design need to carry the visuals, as it’s technically competent as well as artistically. You can take a gander at our Port Inspection here and get the skinny.

The journey through Drangleic needs to be experienced. It’s a marriage of phenomenal world design and impressively tight mechanics. And then it probably needs to be experienced all over again through New Game +. It’s undoubtedly bloody hard work, but that just makes every sliver of success precious. Hurrah for Dark Souls II.