Look, Elden Ring is potentially still years away, which means Souls fans on PC could be in the middle of a very long wait for more brutally difficult FromSoftware goodness. The perfect remedy for this restlessness? Revisiting the dark horse of the Souls trilogy: Dark Souls 2.

I know this is going to be tough, but deep down you know that Dark Souls is a deeply flawed game in places. Blighttown, the Depths, Lost Izalith, Tomb of Giants, and (glorious architecture aside) Anor Londo are all just horrendous slogs that you have to endure. I don’t have to explain the first three, you probably already harbour a deep hatred for them, born of curse-spewing frogs and falling to your death. Tomb of Giants is bad because the only thing that makes the area challenging is that there’s no light. That’s not a challenge, that’s bullshit.

Anor Londo is slightly more contentious, because it’s gorgeous and Ornstein and Smough are rightly regarded as one of the best duo boss fights around. But even if you give a pass to the dodgy rafter sequence, which has no place in a ‘tough but fair’ Souls game, you’re still left with a Titanite Demon crammed into a tiny chapel and the pair of Silver Knight archers with magical homing arrows. Again, not fair challenges, just nonsense.

Apart from the aforementioned dynamic duo, Sif, and pretty much any boss from the DLC, I have some stern words for the boss fights, too. You fight the Asylum Demon three times, you have to die to Seath and potentially lose a heap of souls (unless you know ahead of time to equip a protective ring), the drop to enter the Gravelord Nito fight can literally kill you, the Capra Demon is just a brawl in a phone booth, and then you’ve got the Bed of Chaos, which you can only beat by platforming in a game with some of the worst platforming mechanics of all time. The Four Kings are a DPS check, Pinwheel is a joke, and even the final boss, Gwyn, is a wimp once you know how to parry. You can even cheese him with heavy armour and you’ll see the credits roll in no time.

None of this is new information, I know, and I promise I’m not here to rip on Dark Souls for fun – it’s still a great game, just not perfect. My point is: it’s baffling that we’ve collectively given Dark Souls a free pass for many of the same issues that Dark Souls 2 was heavily criticised for at launch. 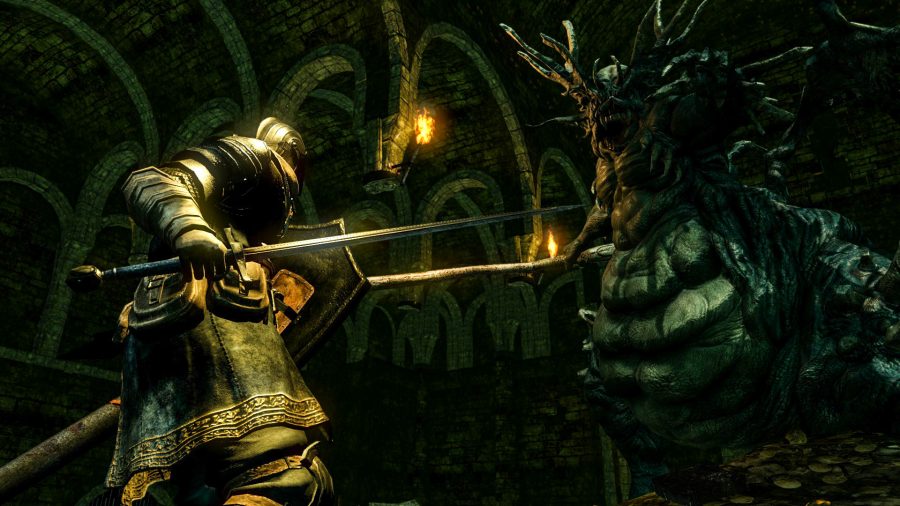 As in its predecessor, boss design in Dark Souls 2 isn’t perfect. There are a lot of easy bosses and ganky enemies, and only a handful of highlight battles like Fume Knight, Darklurker, and Sir Alonne – and yes, it’s a little tedious that so many of this game’s best bosses are knights. But the DLC expansions – bundled with Scholar of the First Sin – give us one of the best dragon fights in the series with Sinh, and some excellent mechanics in the Burnt Ivory King boss fight. And these bosses can be made a little easier as Dark Souls 2 lets you permanently clear enemies on difficult boss runs by killing them enough times. Alternatively, if you’re after a tougher challenge there are a few ways of increasing the difficulty in addition to NG+. All of these are improvements on the original for which Dark Souls 2 doesn’t get enough credit.

Majula is up there with the best reveals in videogame history

The same could be said of the aesthetic. Where Dark Souls is dark and gloomy throughout, only breaking up the drab greys and browns for a short spell in Anor Londo, Dark Souls 2 gives you some of the series’ most visually arresting locations, like Dragon Shrine, Drangleic Castle, and Majula, the last of which is up there with the best reveals in videogame history. You emerge from the uncompromising tutorial into a gorgeous seaside village that’s permanently illuminated by a half-set sun. 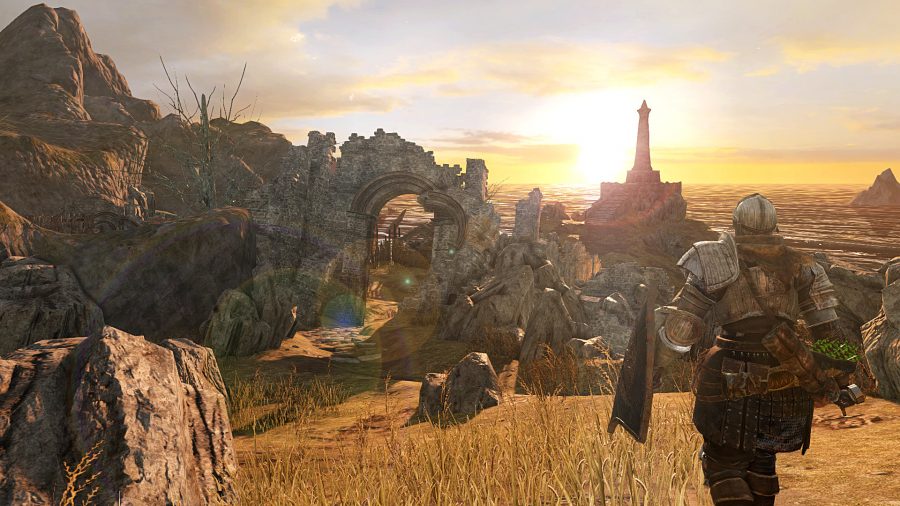 Instead of a cavalcade of miserable ghosts moping around feeling sorry for themselves, Majula is home to a much more lively crew – sure, there are a few sulkers here as well, but there’s also a cat. Indeed, the NPCs in Dark Souls 2 are a marked improvement all around. I love Solaire and Siegmeyer (who doesn’t?), but most of the NPCs in the first Dark Souls aren’t all that interesting. Dark Souls 2 has a huge cast, and they’re all worth getting to know. Take Lucatiel of Mirrah, a noble warrior who, like yourself, is battling through Drangleic to keep herself from hollowing. As your paths cross you notice she’s increasingly weary and forlorn, her memory is getting hazy, and eventually she ends up forgetting everything but her own name. It’s heartbreaking.

You’ve also got Maughlin the Armourer, who starts off shy and reserved, and becomes increasingly cocky the more you buy from him. Then there’s Royal Sorcerer Navlaan, a character who will either send you on assassination quests or hunt you down and kill you depending on how you interact with him. Wheeler dealer Gavlan provides plenty of comic relief, and you also get a healthy dose of bizarre in the form of Vengarl, a talkative head who tasks you with finding and defeating his headless body. Some of Dark Souls’ NPCs have interesting backstories, but as they’re mostly revealed in item descriptions it’s difficult to really connect with any of them.

However, the biggest area of improvement is in Dark Souls 2’s gameplay. Whereas the combat in the first game is slow and you’re quite limited in terms of viable character builds, Dark Souls 2’s power stance mechanic expands your options by adding some devastating movesets for dual-wielders. Power stance also extends to mages by adding some unique spell effects, and the result is build diversity that far exceeds what’s possible in the first game. Additionally, you have to manage stamina more carefully in combat, backstabs are much harder to exploit, and there’s a weapon in Dark Souls 2 called the Bone Fist that gives you the ability to do Hadouekens. So that’s pretty awesome. 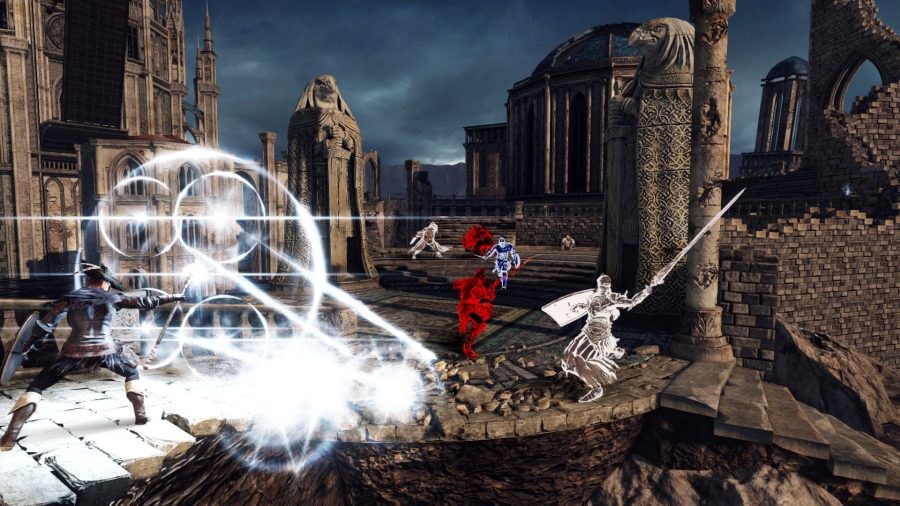 Dark Souls 2’s quantity over quality approach might not work out for its boss fights or the number of poison levels you encounter, but it certainly makes the PvP more interesting and adds plenty of replay value for players who love experimenting with weird builds.

Read more: The best games like Dark Souls on PC

Everything gels together a bit better in the sequel, and while it shares many of the original’s flaws, it improves on the series’ core gameplay in important ways. Not only is Dark Souls 2 bigger, it’s full of more interesting characters, weapons, and areas. There are so many more toys to play with when you start up a fresh Dark Souls 2 run, and it’s important to appreciate that when news of the Elden Ring release date still seems so distant.

Anyway, I’m off to start a new playthrough now, perhaps with a dual-shield faith build.