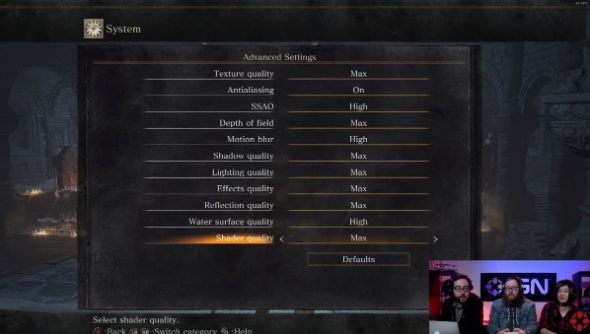 An IGN first look livestream of Dark Souls 3 has given us a sneak peek of the game’s graphics options before launch, and it’s just as scary as every other Bandai-Namco port.

If the port can hold the mustard, Dark Souls 3 is a strong contender for our Best PC Games of 2016 list. See what’s already made the cut, why don’t you?

The options, shown in the above screenshot (with thanks, Reddit detective Chief Inspector RedQ) lists the usual quality of life settings for PC gamers such as separate lighting, shadows and texture fidelity, but falters on the anti-aliasing.

A simple “on/off” option doesn’t instil much hope for anyone on older hardware who may want to choose between any one of the post-processing methods of removing jaggies without turning them off altogether.

To make matters worse, it doesn’t even specify which one will be enabled, so your 980Ti might be sat there spitting out a sub-par 4x MSAA like a scrub when you KNOW it’s capable of at least SSAA. Nightmare.

The livestream also showed off some of the keybinding options, offering a ray of hope as keyboard and mouse controls are at least present in a separate column to controller layouts. Could this be the first Souls game to let you bind actions separately that it had previously grouped on a single controller button? Without a hastily assembled mod tool? Praise the dev!

According to RedQ the game looked a little choppy despite running a factory 980, and whatever resolution they were playing it on, but it’s still pre-release so there’s hope yet that drivers can smooth out those wrinkles. Have faith, pilgrims.