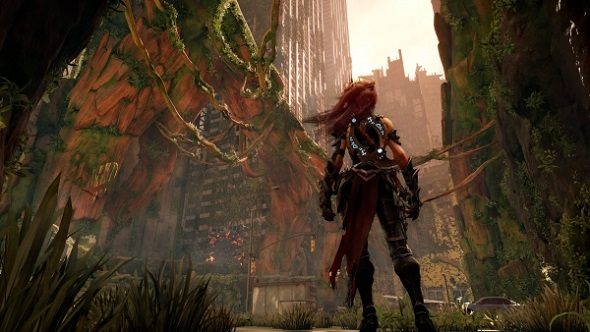 As May marches on, IGN’s spotlight on Darksiders 3 continues. Following on from its previous entry which discussed how Darksiders 3 came into being, this latest video has Gunfire Games president David Adams talking fans through the changes to combat, as well as this game’s place in the Darksiders universe.

Here is a list of upcoming games which should see you through to Darksiders 3.

Story-wise, Fury’s quest takes place while War in prison following the opening of Darksiders and Death is doing his own thing in Darksiders 2. Unlike her brothers, Fury is completely loyal to the Charred Council and is sent to Earth solely to enact their wish of dispatching the Seven Deadly Sins. According to Adams, each Sin has taken up residence around the globe, terraforming their own little realms to match their appearance. The first Sin you encounter is the insectoid Sloth, with his domain being filled with his bug minions gestating in larval sacks. With Darksiders and Darksiders 2 infamous for their overly elaborate character designs, I can’t wait to see what Gunfire Games have come up with for the likes of Gluttony, Lust and Wrath.

The blacksmith and Old One Ulthane from the original Darksiders is present in Darksiders 3, with him helping Fury in her quest to kill the Seven Deadly Sins. While Adams was quiet on how prominently he will feature in Darksiders 3, expect him to upgrade Fury’s whip and her other secondary weapons. By the sounds of it, weapon upgrading will be closer to the original Darksiders as opposed to Darksiders 2, with Fury keeping hold of her whip and upgrading it as time goes on, rather than finding and equipping new loot.

As for combat, Fury is somewhere in between the lumbering sword slashes of War and the super fast scythe slicing of Death. She’s certainly mobile, being able to cartwheel and flip around to dodge enemy attacks while cracking her whip. Her flowing hair is set to change based on what spells or secondary weapons she uses in battle, with a fire spell causing her hair to burst into flame and so on. While War and Death were pretty po-faced individuals, Fury looks to be the live wire among the Horsemen.