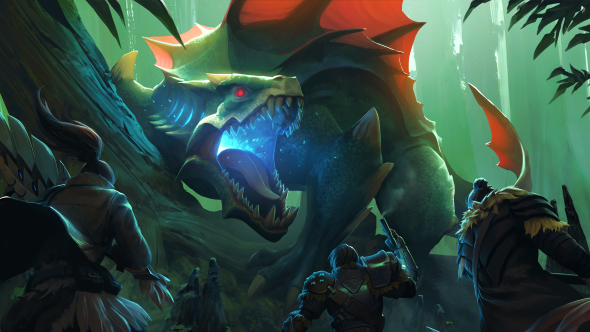 Dauntless, the stylish co-op monster hunting RPG (that’ll be the perfect thing to tide you over until Monster Hunter: World releases on PC in the autumn) heads into open beta tomorrow, Thursday May 24. Ahead of the launch, developer Phoenix Labs has released an opening cinematic, introducing players to the world of the Shattered Isles.

The trailer is, sadly, pretty light when it comes to monsters. Actually, let me rephrase that – there are no monsters. But the cinematic does explain the game’s world, and introduces players to their role in the game – the Slayers. Slayers are monster hunters, tasked with keeping the city of Ramsgate safe from enormous monsters called Behemoths. Between hunts, slayers can return to Ramsgate to craft new items for their arsenal, before heading back out into the world.

Dauntless relies on teamwork, just like the titles on our list of the best co-op games on PC.

Via the medium of a stern captain (and a sassy pilot) the cinematic, which will launch alongside the arrival of the beta, shows a bunch of rookie slayers setting out to defeat a behemoth. Things go wrong, however, and their airship is quickly caught in a storm, scattering the team and leaving them to fend for themselves.

You can watch the trailer below. If you fancy getting involved, you can get access to the beta at playdauntless.com.

If Dauntless feels like your kind of game then you should check out our Dauntless guide to help you get the most out of your monster-slaying. We’ve also got a bunch of great games like Monster Hunter: World available on PC (a list that Dauntless just so happens to feature on) that will help scratch your monster-hunting itch over the summer.