Where can you find Dauntless Deathmarks, and what do they do? Since the launch Season 5, heaps of glowing pink kunai have appeared in the game’s social area, Ramsgate. The two are, of course, linked to one another. Alongside the start of the Hidden Blades season, Phoenix Labs has introduced a battle pass that’s themed with ninja-cosmetics.

Dauntless’ battle pass follows the model that Fortnite sets out, and has you climbing tiers to earn gear and cosmetics. As you’d expect, the means of progressing this is by going out and chopping monsters down to size. Thanks to these Dauntless Deathmarks, however, you can get a swift boost of experience at the start of your play session.

There are ten of these Deathmarks in total, and collecting them will give you a handy experience boost to help you ascend the loot tiers and pick up some new gear. On top of that, they refresh daily, so it’s a good idea to weave picking them up into your routine. Now that’s laid out, make your way over to Ramsgate and try out this optimal route, and you’ll pick these Dauntless Deathmarks up in no time at all.

Where to find Dauntless Deathmarks

The first Dauntless Deathmark is a doddle and is right in front of you when you spawn into Ramsgate. You’ll notice it as it’s a glowing pink kunai knife that’s sticking out of the wall to your right. Walk up to it and press E, and it’ll be yours.

From there, run to the right and up the stairs, and you’ll find the next one. You may notice another directly to your left, but we’ll come to that later. Take a sharp right and pick up the next one. After that, run straight ahead and take a left and you’ll see the next Dauntless Deathmark. 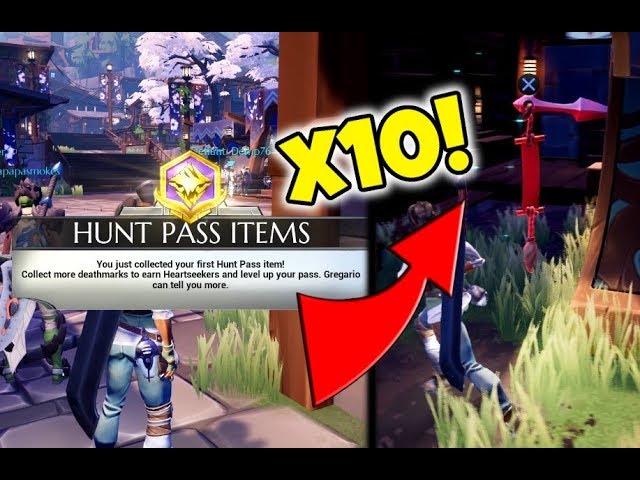 And there you have it, where you can find the Dauntless Deathmarks, and what the luminous pink kunai can do for you and your battle pass. Picking up all ten of these will give you a nifty 50 experience points, which is about half a level on the Dauntless Season 5 battle pass. Now, if you excuse us, we’re off to get decked out in some ninja gear.