Development of DayZ – while still in Early Acess is rather good says our DayZ review – is ramping up: Bohemia have drafted a whole new set of developers onto the team, according to lead Dean Hall that’s “effectively doubling the whole project. Besides the new team members, work has begun on the cooking system.

You could say things are *hotting up*. (Don’t worry, I’ve already stapled my hand to the desk as punishment.)

“Heavily inspired by the outstanding cooking system in Project Zomboid, this will be part of a wider push in March to focus on Survival aspects of the game in general,” writes Hall. “You will turn your cooking device on (fireplace/stove) and then place the items in it.

“The items will slowly heat up, and when at the required heat for the required period of time, they will become “cooked” and/or turn into something else (such as soup). Items can become overcooked, and items can also become cold via some process (this will be looked at later).”

No word on whether you’ll be able to milk zombies to make cheese. Word has it zombie cheese is like a very strong smelling stilton but with the soft, greasiness of camembert.

This helpful diagram explains how the universal system of blue/red scale applies to heat: 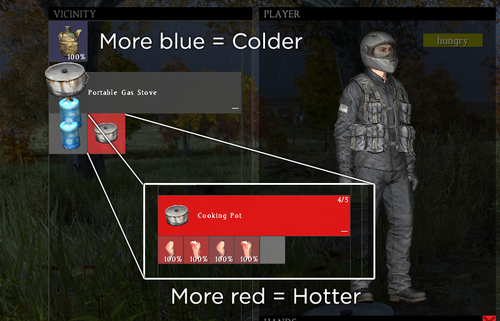 The more you know, eh?

Besides that the team have worked on adding animations of two-handed actions into the game, improving fire textures, and having your network message you when it feels poorly. Details to be found on the DayZ developer Tumblr.