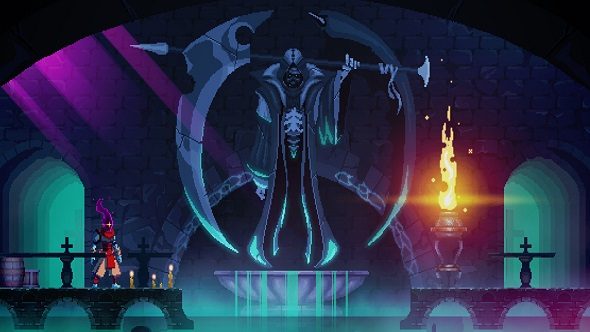 Hoping to channel elements of the Souls series, Metroidvanias and roguelikes, developer Motion Twin has set a date for the early access launch of Dead Cells. Coming to Steam on May 10, Dead Cells is hoping to make death “the new backtracking” and further develop the ‘roguevania’ genre.

See what other PC games are on the horizon with our list of upcoming PC games.

Rather than playing as a veteran bounty hunter or a Chosen Undead, Dead Cells’ main character is nothing more than a sentient mass of cell life, stranded on an ever-changing island. As a mass of cells doesn’t really have arms or legs, each playthrough begins with it taking over the corpse of a recently deceased prisoner to explore this morphing landmass. From there, players must search the various themed areas present on this island, defeating bosses and unlocking permanent upgrades to further your exploration.

Gaining these upgrades is key, as players in Dead Cells must inhabit a brand new body when they start up their new playthrough. You will keep certain power-ups and spells upon death, but you must piece together a new arsenal every time you die. Based on the trailer, it looks like you can preserve certain weapons and items in special vials found near the beginning of each run, but this is just speculation based on the footage.

There is a hint of procedural generation in Dead Cells, but it is not as egregious compared to other roguelikes like Rogue Legacy. Rather than generating levels from scratch at the start of each run, Dead Cells picks from a selection of level “chunks” to piece together its game world. As you continue your adventure, you’ll start to recognise pieces of a level so you’ll know how to tackle specific zones.

The combat is akin to fellow Souls-like Salt and Sanctuary, with players rolling, running and jumping to avoid enemy attacks. There seems to be a greater emphasis on weapon switching and spellcasting in Dead Cells, with players being able to combine multiple techniques to finish off opponents. As a quick example in the trailer, we see the main character freeze an enemy solid and then drop a platform on them, causing them to shatter into a thousand pieces.

Character animations and movement are silky smooth based on this trailer, with the main character effortlessly switching from giant sword swings, rolls and casting magic. It’s the most fluid Souls-like I have seen to date, setting itself apart from the stiffer animations of something like Salt and Sanctuary.

When Dead Cells launches on Steam Early Access, developer Motion Twin say the initial launch will contain about “30-40%” of the final game’s content. At this time, it is unknown for how long Dead Cells will stay in early access, but expect that information to be available once it goes live on May 10 on Steam.