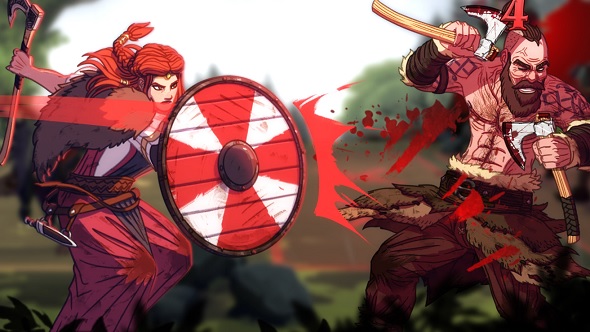 You and your Viking family have been exiled to a faraway land where survival is proving to be tough. Poor you. Oh well, you’ll have to pick up your misery and march back out of camp – your kids need feeding and that disease your wife contracted isn’t going to sort itself out.

Welcome to the harsh daily demands of Dead In Vinland. Want a challenge? You’ve come to the right place as we’re giving away 20 Steam keys for the brute of a game below.

If you’re after more freebies then here are some of the best free PC games.

Dead In Vinland has been compared favourably to The Banner Saga. Yet the comparison betrays what else the game has on offer beyond tactical battles and Nordic depression. There’s plenty more than swords and starvation that can kill you (and, let’s not forget, your loving family) in this game. Remember to smile, everybody!

Get a load of this: you need to gather resources, secure food, ration water, look after your mental health, fight diseases and salve wounds, and fight against storms and droughts. It’s a mix of survival game mechanics with a turn-based, tactical RPG.

You build a camp, manage and talk to your people (even romancing a few of them and kicking out the worst of them), craft new items, expand your settlement, and explore the island you’re trapped on to progress the story, and get into 3v3 scraps with the enemy.

While Dead In Vinland is meant to be tough it does offer three difficulty modes so you can go into the easier one if you just want the drama of the story. However, an Iron Man mode is included and the developers can’t even complete it so, er, if you’re a masochist, there you go.

If you want to win one of the 20 Steam keys we have for Dead In Vinland then you can enter the competition using the widget below.Every action you complete is worth one entry into the giveaway, and the more actions you complete the more chance you’ll have of winning. We’ll also need your email address so we can send you a code upon winning – we won’t send you spam, we promise. Please read ourterms and conditionsbefore you enter.