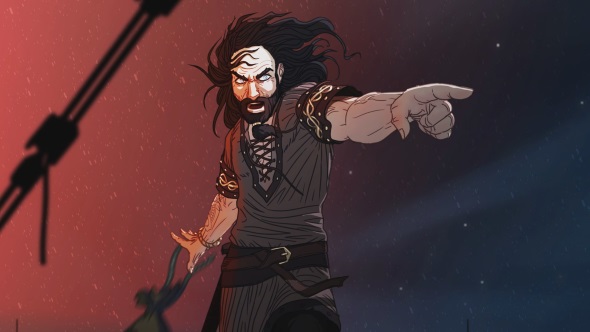 Rest in peace, dear Cissé. I hardly knew you – you were a member of our camp for just three short days – and perhaps that is why I wronged you. Had I known you better, perhaps I would not have tasked you to harvest berries, day in, day out, with no concern for your wellbeing. Perhaps, had I made an effort to forge a bond with you, I would have made sure you were better rested. If only I had done that, then you would not have died from exhaustion. I do hope you can forgive me, but managing a bunch of survivors in Dead in Vinland is really difficult. But thanks for the fruit. I just wish you hadn’t eaten your share before you kicked the bucket.

More Norse misery can be found in The Banner Saga 3.

Dead in Vinland is the second of CCCP’s ‘Dead in…’ series, and sticks to the same survival management template drawn up by its predecessor, Dead in Bermuda. This time, the modern timeframe and tropical setting is exchanged for the Viking period, with plane crash survivors replaced by Nordic exiles. It begins with a family of four who have been chased from their home and are now shipwrecked on a hostile island. Through careful management and JPRG-style combat, you must help them establish a new home, recruit fresh allies, and meet the demands of a cruel warlord who collects ‘tributes’ (see: steals) from you every week.

Keeping the family alive means effective management of dozens of statistics, and it is vital that you maintain a careful eye on all of them: if one of the four main characters die, it is game over. Those left hungry will starve, those injured in battle will grow sicker and wither, and the most unhappy will tie their own noose. Typically, every action they perform will have a negative effect on at least one of their core stats – working will always fatigue them, for example – so it is important that you counterbalance everyone’s tasks. 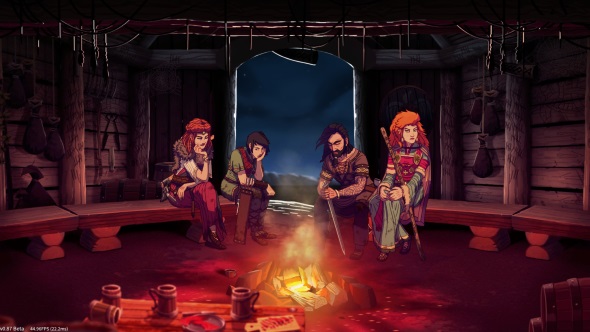 Dead in Vinland’s gameplay loop is split into days, which are made up of three phases: morning, afternoon, and evening. During the first two phases you are able to assign tasks to each character at the camp. Chopping wood, collecting water, and exploring the island are entry-level jobs, but when you have established a workshop you can build new areas that open up new job opportunities. Within a few days you will have harvesting stations for gathering and juicing fruit, pens for breeding livestock, and a kitchen area to prepare meals that better satisfy your characters’ hunger. Setting someone to work at these stations will yield important rewards: food, water, and resources used to craft new areas of the camp. Without these your characters will, with no level of uncertainty, die.

Finding the balance of how much time you dedicate to each job is more difficult than it sounds. With just four characters to begin with, each only skilled at a couple of tasks, it can be easy to let a job or two fall by the wayside. As the sun sets and the family gather around the fire to eat in the evening phase, the shortcomings of your day are revealed and the worst situations begin to unfold. Perhaps you forgot to gather water today, or to boil it to ensure it is drinkable, and so everyone must go thirsty. Maybe you were so focused on chopping wood and crafting new areas that no-one went foraging for food. Or you may have neglected the need to chop wood, and now the fire has gone out. Each of these mistakes can lead to absolute disaster. 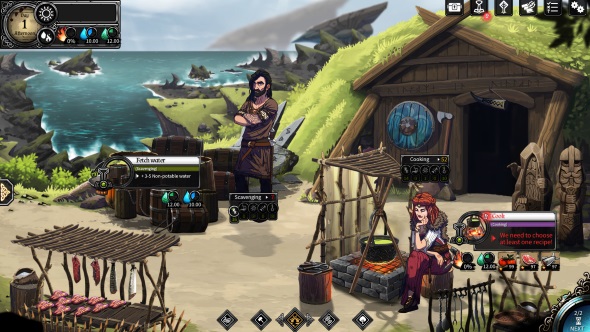 Such disasters can be prevented, although there is more to maintaining the delicate balance than simply assigning the right jobs for the day. You can craft stations that are not tied to a specific job and that will help keep your characters alive and healthy through other activities – or inactivity. A comfortable rest area will reduce a single person’s fatigue, so it is vital you rotate them in and out of this. A tavern reduces depression, although only if two people are in attendance: drinking alone is not the solution to your problems. A medicine tent will help combat the sickness inflicted by all the raw meat your group are having to eat until you have crafted a cooking station.

The downside of these stations is that healing takes time. It is time that your characters could be spending gathering the items required to keep everyone alive. Significant forward planning is thus required: you do not want to be in a situation where you are desperate for wood, but sending your only talented forrester to the logging station instead of the resting spot will push them into fatal levels of exhaustion.

As you can imagine, trying to gather everything you need with just four people, while simultaneously keeping them happy and healthy, is a real challenge. This is not helped by the fact that the local warlord collects a pre-agreed tribute each week, so you will always need to have more resources stocked up that you actually need. You can alleviate this by finding new allies on the island during your expeditions – such as the dearly departed Cissé – but new survivors come with their own challenges. An extra hand means increased yield, but it is both another mouth to feed, and another character to fit into the already difficult balancing act of work versus rest. 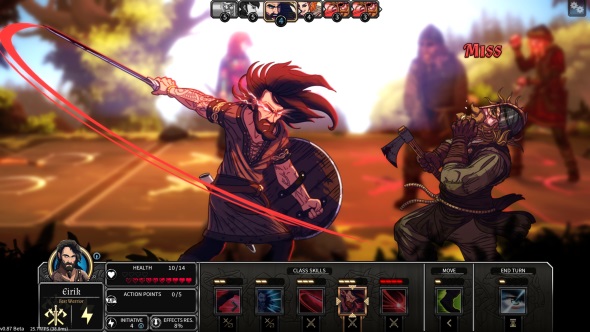 An extra hand does mean an extra warrior, though, which comes in handy during the random encounters you experience when exploring the island. Combat unfolds akin to a JRPG: two parties of three, one on either side of the screen, both taking it in turns to unleash ability-based attacks. There are some striking flourishes – the attack animations are bold and wonderfully violent, and there is some clever use of front-and-back row positioning tactics – but encounters all too frequently feel samey, and do not provide any danger that is comparable to the existential drama of the management elements.

While exploration does mean frequent doses of combat, it is the primary way of discovering Dead in Vinland’s secrets. Each session spent exploring reveals new sections of the map, and each new section can contain something as vital as food or as conflicting as a new survivor looking for a home. But it is when you find something far more out of the ordinary that Dead in Vinland really comes alive. The sight of a blue woman sat atop a throne, her skin etched with runes and four cats sat at her feet, reveals that there is more Norse at play than the game initially lets on. Dead in Vinland will allow you to make deals with the gods, if only you can figure out how to wake them. 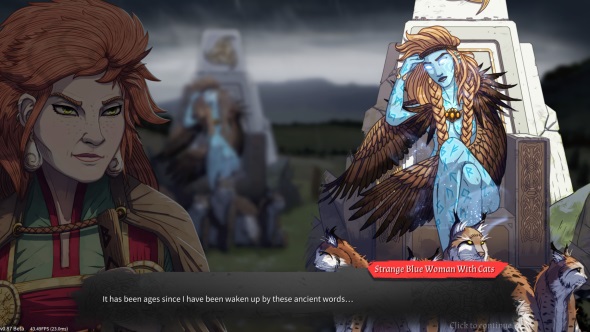 At first glance, it would be easy to assume that Dead in Vinland is attempting to replicate The Banner Saga’s successes. They are both Nordic adventures laced with tough decisions, downbeat stories, and narratives that unfold in the style of a visual novel. But, unlike Ash of Gods: Redemption, Dead in Vinland is no mere copycat. It blends the harsh and mythic Norse qualities of Stoic’s beloved game with the tough Dead in Bermuda template to create a long-term challenge where the problems arise from your management style, as opposed to narrative forks in the road.

Dead in Vinland promises to have as many memorable moments as The Banner Saga but provided in a more emergent manner. That is not to say that Dead in Vinland never feels like a story, just that it feels like yourstory, rather than the developer’s. With that said, I can’t wait to see where my own tale goes. Now if you will excuse me, I have a goddess to awake…

This feature was originally published on March 28, 2018. Read more about Dead in Vinland.