Latest: check our story on why yuo should try the the Dead Island Epidemic open beta.

It’s difficult to stop your inner-cynic sighing at the idea of Dead Island: Epidemic. Branded as “The world’s first ZOMBA”, it’s the combination of Dead Island and Dota that nobody asked for and no-one wanted. This can’t be anything more than a filthy cash grab based on the fact that MOBAs are totally in right now, can it?

Not so. Unlike its undead population, Dead Island: Epidemic dares to have an original thought. What could have been yet another clone of the three-lane 5v5 design is actually a frantic to-and-fro capture point game. Not only that, but it also packs in a co-op mode and the original games’ weapon crafting for an exceptionally robust package. 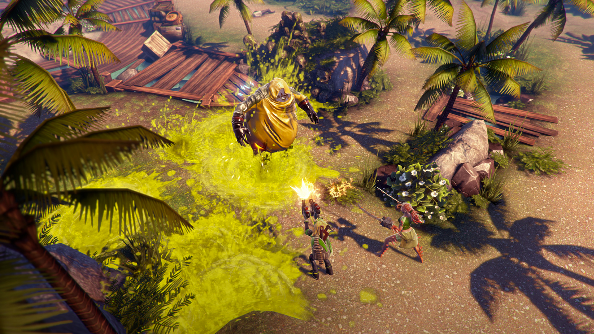 Eschewing any kind of recognisable MOBA set-up, Epidemic’s competitive Scavenger mode takes place on maps with uncountable labyrinthine lanes and pits three teams of four players against each other in a battle for resources. Dotted around the map are Supply Points, which when captured will offer up crates which must be picked up and returned to your truck to score points. First team to fill their truck wins.

This design asks numerous strategic questions: do you keep pushing out to capture new supply points, or keep a strong defence around your existing camps? Do you collect supplies little and often, spending a lot of time heading to-and-from base, or do you stay in the field but risk being killed and your supplies stolen by the enemy?

There’s other ways to score supplies other than the capture points, too. Special infected creatures spawn during the match and offer Epidemic’s parallel to jungling. These infected are exceptionally tough to kill, but are the richest source of supplies. Their location is marked on the mini-map when they arrive, and you can guarantee almost every player will drop what they’re doing and head out for the slaughter. What follows is a brutal melee of players attempting to kill both the infected and other players wrestling for their slice of the pie. Sneakier players can use the madness as opportunity to capture Supply Points that have now been left abandoned.

Whilst trying to hold points and gather supplies, there is of course the small issue of the zombie apocalypse. The undead are everywhere, and unlike MOBA creep they don’t take sides and they don’t march in formation. As in the main Dead Island games, zeds come in numerous varieties, from the usual squishy shufflers, to specials that can belch toxic vomit, bind you in rope-like tongues, or trample you under elephant feet. They make taking points solo difficult, and can be your demise if you’re not careful when escaping from a nasty melee. 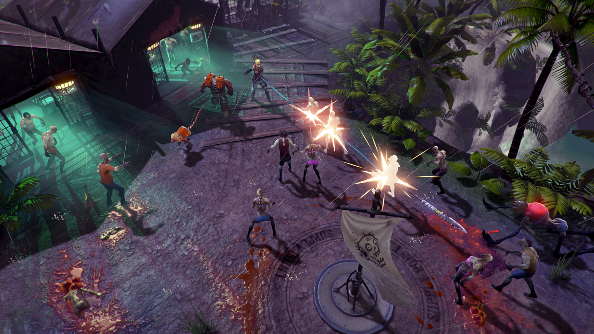 With so many zombies around, it’s great that smashing them in the face is good fun. Epidemic takes just enough of the MOBA formula to add some strategic excitement, but maintains a lot of the simple bashing and shooting of the core series games. Movement uses WASD, left-click hits things, right click hits them harder. Melee weapons can be swapped out for guns, and every character can switch between the two, making everyone fairly versatile. Each character has a cooldown hotbar with three skills and an ‘ultimate’ attack, uniquely flavoured to the survivor and helping broadly categorise them into roles like ‘ranged’ and ‘support’.

There’s a heavy dose of levelling involved in Epidemic. Characters level in-game, starting matches at level 1 and progressing as they murder their way through the horde. Matches contribute XP to your character’s persistent level, which lets them use higher tier gear and boosts their skills. And the more you play, the more your account level increases, allowing you to craft better items. The whole system feels quite confusing to begin with, with tooltips insisting you can’t use certain gear until you’re at tier x, but failing to explain how to reach that goal. A thorough exploration of the many menus will eventually clue you in. It is a slow process (undoubtedly to prompt you to purchase XP boosts), but given time you can develop your character into a turret-building, sword-swinging menace.

The persistent character levelling limits the weaponry available to you, which combats players looking to buy their way to victory. The microtransaction shop contains a collection of shooters and spiked bludgeoning tools, but all of a fairly high gear tier, thus requiring characters that have already been considerably played and levelled. You can pay for XP boots to artificially level your character, but those looking to buy their way to the top will only find themselves matchmade with people who exceed their skills due to working for the same rewards. Pay to win and you’re likely to lose instead.

Weapon crafting comes straight from the original games, bolting together bits of scrap and following blueprint instructions to create contraptions. Scrap and blueprints are randomly awarded at the end of each match, along with a construction currency that can be used in place of items you don’t have. It’s a simple system that provides some welcome feedback on your progression, and helps tie the game to the parent series. 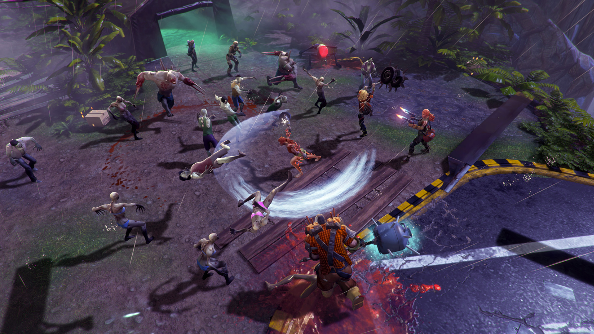 Heading into the arena without any upgrades is inadvisable, which is where Horde mode comes in handy. A co-op mode for four players, Horde uses more traditional RPG-style maps and requires your team to smash zombies, capture points, and defeat a final boss to succeed. It’s a useful mode for farming XP, resources, and learning the intricacies of your skills, but is an interesting experience in its own right.

There are three difficulty modes, with the easiest being almost pathetic and the hardest being astonishingly brutal. The mid-tier is a significant jump up from the easy ‘Scout’ missions, adding special infected into the mix and increasing the amount of zombies that swarm you at each capture point. The final boss in the mid and upper tiers are unique characters with special attacks that can take and deal massive punishment. They require a tactical, full-team approach. But even with a solid team they’re too difficult; a group can battle unhindered through the level, only to be defeated numerous times over by the boss. A complete wipe-out will revive your team at the entrance to the boss area, but the frequent deaths at the hands of these damage sponges are both frustrating and damaging to your final completion time, which dictates your rewards.

Dead Island: Epidemic is available on Steam Early Access right now, with a minimum buy-in price of £12.99. Slapping down money doesn’t just grant you early entry; you’ll also get a pack containing three starter characters, a collection of currencies, and five weapons. In terms of the in-game store, this isn’t a bad buy. But a little bit of patience will get you the best elements of this package. Whilst Dead Island: Epidemic is a good game, and certainly the best spin on a MOBA that it could be, it’s going to be free in the near future. The wait between now and then isn’t worth £12.99. Invites are already being dished out for the game (check your Steam Inventory), so the date that Epidemic goes open beta is surely approaching.

The main Dead Island games are much like their core concepts; bolted together, plagued and rotting. Epidemic is nothing like them. Even in its beta form it’s nicely polished and practically bug free. Little touches like a day/night cycle make it feel like a game that was produced with care. It’s completely unexpected that the best Dead Island game would come from such a cynical-sounding pitch. Epidemic is entirely worth your time, but that time can wait just a little longer.

Latest: check our story on why yuo should try the theDead Island Epidemic open beta.