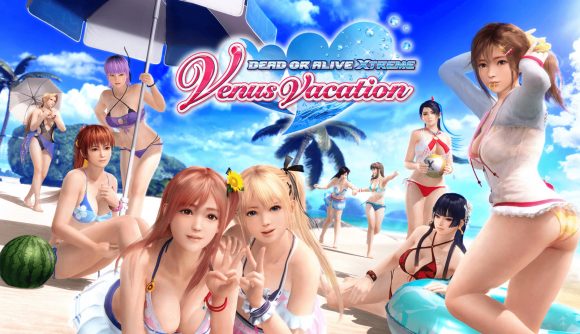 This PC version of DOAX isn’t actually a sports game in the way its predecessors were. Instead, you simply set the parameters for your team’s strategy, dress them up in bikinis with various stat bonuses, and simply watch the matches play out. It’s already been available in English for ages, but the Steam app is region-locked, so you can’t actually download it in most English-speaking locations without bending Valve’s TOS to the breaking point.

It’s entirely possible that this Johren version will be region-locked too, but given the English promotion and the platform’s stated mission “fill a gap in the current otaku gaming landscape outside of Japan”, that seems unlikely.

Whether or not you’re up for ogling anime girls, Venus Vacation is a gacha game, which means it’s questionable in a whole different way. Expect to be regularly encouraged to spend a whole lot of money on a chance at acquiring ever-tinier swimsuits.

If your idea of ‘sexy’ involves sex and not just women in swimsuits, why not check out our list of the best sex games on PC? I so rarely get a chance to link to that one.