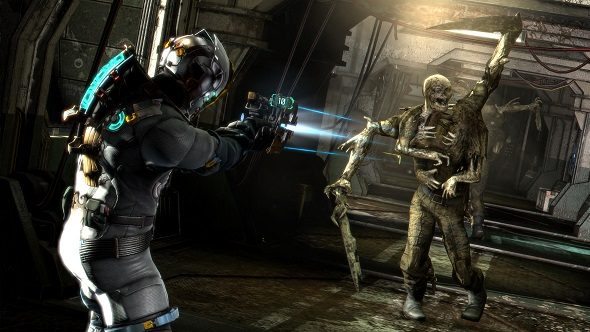 Dead Space released into a world of players trained to aim for the head. That tiny hitbox at the top of every character model is the sweet spot for causing critical damage in a shooter, but Visceral’s third-person horror game instead told us to go for the extremities, to lop off limbs, to tear its alien abominations to pieces and crush their corpses underfoot with magnetised boots.

Like reading about in-game combat? Here’s how the inky alien splats and gooey guns of Prey were developed.

Most shooters are about killing as quickly as possible. While that is, ultimately, still your goal in Dead Space, this horror game forces you into a longer struggle with your foes. As armoured engineer Isaac, you find yourself on an abandoned ship filled with alien lifeforms known as Necromorphs. These creatures are relentless. They keep coming, spilling from vents and climbing up walkways, while the enclosed corridors of the USG Ishimura means there is no escape. The only way to put them down is to use engineering tools such as the Plasma Cutter to fire a searing beam of energy at their limbs, severing as many as it takes to put each mutant down. 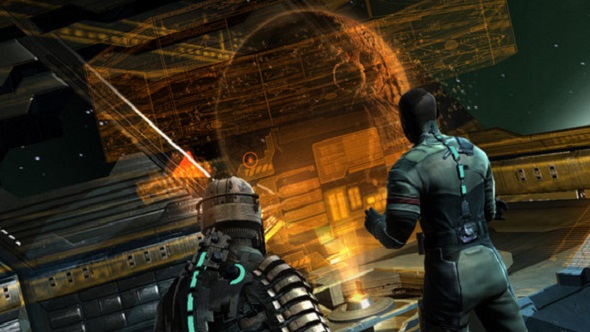 “Think of the classic scene of someone running from a killer in a horror movie,” art director Ian Milham explains. “It’s not the running that’s the most tense part, it’s when they have to fit their car key into the lock in the car door and, [suddenly], there he is. We wanted combat that required precision and fine aiming under stress.”

Making this fraught, time-sensitive virtual surgery work visually was easier than you may expect. When your shot lands on a Necromorph, the limb behind the ensuing weapon effect is hidden from your view. At the same time, a new limb is generated, which then falls to the floor. In fact, some of the limbs that are generated are entire ragdoll enemy models, albeit with everything but the limb itself hidden from view. That visual trickery is invisible to you, much like the little tells that nudge you to get into the Dead Space mindset.

“The key quality was communicating to players how severing different limbs would change enemy behaviours,” Milham tells me. “That mostly fell on animation. Shooting an arm, leg, or head off had to very broadly and clearly change the enemy’s locomotion and attack behaviours in order to teach people what [areas are] a good or bad to target on each enemy. We were training people to unlearn what they knew from other games – headshots and body shots. So unless it was very obvious, players didn’t do it.” 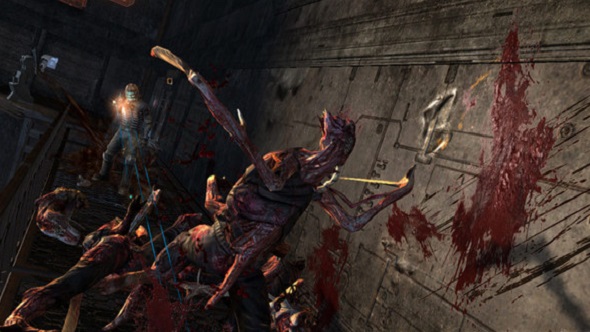 At their core, every enemy is programmed to come straight at you and tear into your flesh. They will pursue you doggedly, but there is more going on under the skin – you just need to make a little incision and peel that rotting flap back to see.

“[Each enemy has a] very intricate state machine that changes completely [in reaction] to limb shots,” Milham explains. “Headshots tune enemy awareness down – they can’t see you anymore – but they up the attack rate considerably, so they pretty much constantly strike; they become almost more difficult. After you take out their legs, they go prone on the ground, so they can’t get to you as quickly, but they present less of a target to hit.”

Though Dead Space’s arsenal is created entirely from sci-fi engineering tools, each weapon feels powerful and each shot feels meaningful, thanks to chunky, animated visual design, huge, identifiable silhouettes for each tool, that limb-lopping enemy feedback, and limited ammo. Miss a shot here and it can be your undoing, meaning you need to be methodical, even when amid chaos. 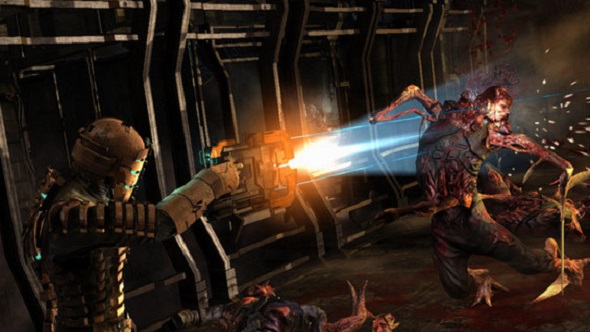 “[Each weapon] started with a very specific combat role,” Milham says. “A weapon that would be good at getting crowds to back off, but did low damage, for example. Or something that had a very wide beam (good for legs), but a slow reload. The idea was for all our weapons to be great at some use case, but poor in most others, so people would have to think tactically about when to use each one. We tried to come up with fictional justification for why space miners would need a gun that shoots a meter wide beam of deadly plasma, but you know, videogames.”

Ridley Scott’s Alien is a scarier film than its sequel because it is about a deadly threat stalking the humans through a claustrophobic environment. Likewise, Visceral made sure the USG Ishimura was full of tight corridors, dark corners, malfunctioning doors, flickering lights, and terrifying alien creatures, all adding up to make you feel constantly on edge. It is not just to ramp up the tension, however – this combat is built for those corridors.

“Dead Space works best in a world with discreet lanes, so players don’t have to manage enemies coming at them from every possible space, but with many flanking routes and vents for enemies to use,” Milham explains. “So we did a lot of experimentation to help find the right recipe. Also, the idea of waves of enemies is important to Dead Space, since the enemy types are so different and complementary, so introducing new groups can radically change things. Vents allowed us to spawn new enemies into the area strategically.” 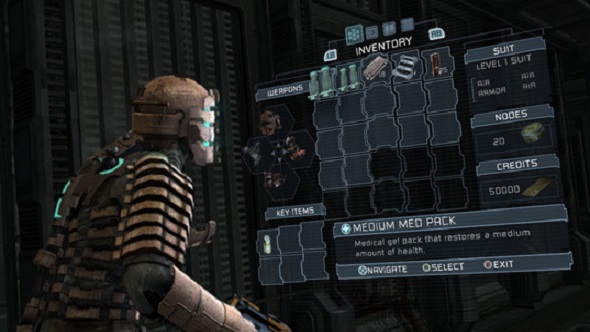 Of course, not every fight takes place in those tight confines. Dead Space is also known for its zero-gravity sections, in which enemies can come at you from any angle. “Zero-G proved to be very difficult, and actually we completely re-imagined it for the second game based on learnings from the first,” Milham admits. “The biggest challenge was orientation and aiming, which proved diabolical. In the end, we had to address this by making a set of enemies that were zero-G specialists, using them exclusively in those sequences. They would ‘lilypad’ around, landing on walls and ceilings, so they could stay still long enough for players to react. We prototyped many enemies that could exist in zero-G space, but none were that fun.”

As always, game development is about knowing when to kill your babies – and, no, I’m not talking about that horrific nursery section in Dead Space 2. If a feature doesn’t suit your game then you throw it out. A similar ethos led to the creation of Dead Space’s stripped-back HUD. Milham grabbed a clip of horror flick The Texas Chain Saw Massacre, overlaid a HUD on the action, then took it into work to show everyone how less scary it made the movie.

“The idea was to not break immersion, and keep people believing the world and not remembering this was a game,” Milham remembers. “So from there it was coming up with as many ways as possible to integrate the information into the world diegetically. My favourite two moments for this are when we put an aim constraint on Isaac’s head-look onto the menu, so he actually tracked on the menu where the player selected. That really made a difference. Then, early in the first game, where we have Isaac see an argument between Kendra and Hammond on his HUD, but also in real life across the train tracks – that really grounded everything and made later videos, which were only in the HUD, feel more real.”

Stripping back that HUD really allowed you to appreciate every severed limb, every chunky weapon animation, and every malfunctioning light. It all works together to make Dead Space feel unlike anything else. In a world where we are all still aiming for the head, it will be missed, along with the talented team at Visceral.